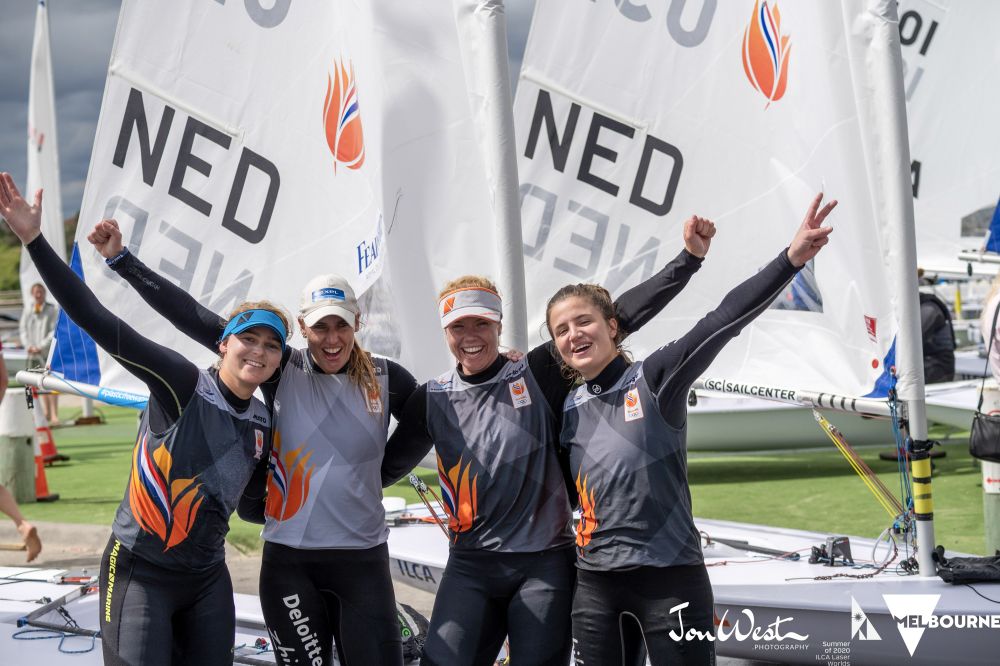 It may have been a case of “saved by the wind” for Rio Olympic champion, Marit Bouwmeester. The three-time world champion led by 24 points over night but saw her margin trimmed to just two points after the first race of the final day. A big wind shift caught a number of the top sailors out, and Bouwmeester, who received a yellow flag (penalty turns), finished 29th. This became her second “drop” but brought into play a 24th from yesterday.

When asked why she was penalised she said, “Too much rocking. I was thinking ‘I deserve a yellow flag’ and I got one.”

Gold fleet went into sequence again, still with the chance of two more races, but the wind continued to die and back to the south-east. At 3pm, the deadline for racing to start on the final day, the AP over A was flown and a relieved Dutch woman made her way back to the clubhouse.

Bouwmeester, who was famous for always training on her own, has recently joined three other women in the Dutch squad and all four finished in the top 10. Maxime Jonkers was second, just two points behind, while Daphne van der Vaart was seventh and Mirthe Akkerman was 10th. Norwegian Line Flem Host took third and defending champion Anne-Marie Rindom, who became ill during the event, was fourth.

Asked how she felt when the flags went up to indicate no further racing was possible, Marit Bouwemeester replied, “It’s incredible. Today I didn’t manage the first race well and I knew I had to be ready to go again. But it’s great to be on top again (after finishing second last year).

“We just started training together and the level of training is so high, they are pushing me every day. This is really a team effort.”

The result has given Bouwmeester a welcome boost ahead of the Tokyo Olympics, where she will now be favourite to defend her gold medal.

It has been a frustrating week for sailors and organisers alike. The regatta was scheduled to deliver two races per day for six days. On the first two days, only one race was possible owing to light and shifty winds. On the third day, sailors were sent ashore when a thunderstorm struck, before returning at 5pm to sail the only race of the day. Day four was cold and wet, with strong winds almost at the limit for safe sailing, but organisers managed to get three races started for the women and two for the men.

Yesterday was the only day of the regatta when conditions could be described as ideal for sailing, with winds around 15 knots.

Today started promisingly, but the sailors failed to behave. It took eight start sequences to get the three fleets away for the first time. Silver Fleet had 14 sailors disqualified in that race for being over the line, while in the men’s division, six were caught out.

When the wind began to die and back to the south, the championship was over for everyone. Some, like Bouwmeester, were relieved. Others saw their chance of Olympic selection crushed as they could no longer move up into the top 10 or beat a rival for their country’s place at the Games.

Jon Emmet interviewed Marit Bouwmeester after the race. Here is the link: https://www.facebook.com/intlaserclass/videos/2545393349052384

Russian sailor Daniil Krutskikh won the first two races of the regatta and led from that point on. Apart from his discard of 22nd in the ninth race, all his scores were in single figures. He finished with a very solid 20 point margin to become the 2020 ILCA Men’s Laser Radial World Champion.

He was interviewed by Jon Emmett prior to the final day and the link to that interview is below.

Young Australian Michael Compton, who turned 17 only two weeks ago, won the silver medal at his first Open World Championship. He will represent Australia at the Youth Worlds in Brazil later this year..

Nik Pletikos of Slovania was third, sharing the moment with his two sisters who sailed in the Women’s Championship.