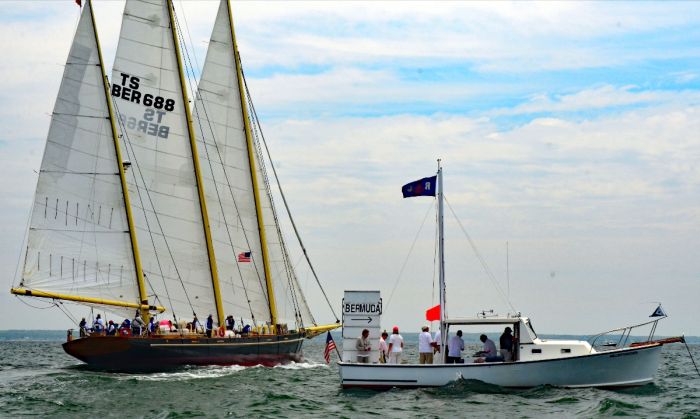 Marion MA, June 13, 2019: When the race office at Beverly YC in Marion MA opened on Thursday morning, 12 of the 41 boats still had to do their final registration check-in and final paperwork. The rush was on.

Skippers also had to pick up their YB tracking transponders, so race officials, friends and families and other race watchers on land and at the Royal Hamilton Amateur Dinghy Club, the Bermuda partner in the race, can follow them to Bermuda with the Race Tracking app.

It was Do-Day for all the Marion Bermuda racers, the day they did all the last minute chores they had left to do. And the weather was nasty on Sippican Harbor in Marion, too. Yachts were tossing on their moorings and rain showers were preparing crews for the wetness of the Gulf Stream crossing that’s just over the horizon.

Crews were loading provisions from the Beverly YC pier into the harbor launch then off-loading on to their bucking boats. It was a struggle but this is ocean racing.

The final business for the day included the mandatory skippers meeting at Tabor Academy’s auditorium. The skipper and navigator were required to attend the entire meeting from start to finish. All other crew members were welcome and invited to attend.

Nan Johnson, Marion Race Operations Administrator, said, “We wanted everybody on all the boats to come because we think it is important for the crew to be involved and informed. The Tabor Academy auditorium is very large and well suited for them all.”

The meeting included comprehensive briefings on the starting procedure, weather, the Gulf Stream and approaches to Bermuda. These briefings are the only ones sponsored by Marion Bermuda Cruising Yacht Racing Association.

The dangers on the approach to Bermuda was a particularly important part of the briefing. Yachts all have a specific list of marked reefs that they are warned to stay outside of on their approach to the finish line off St. David's Lighthouse. They were shown pictures of each one.

Races within the Race

Competition for special awards is a unique attraction for the Marion-Bermuda Race.

The R&W Rope Rigging Solutions Team Trophy is offered for established yacht clubs or sailing organizations that form a team of three member yachts. The team whose three yachts have the lowest corrected time total will be the winner.