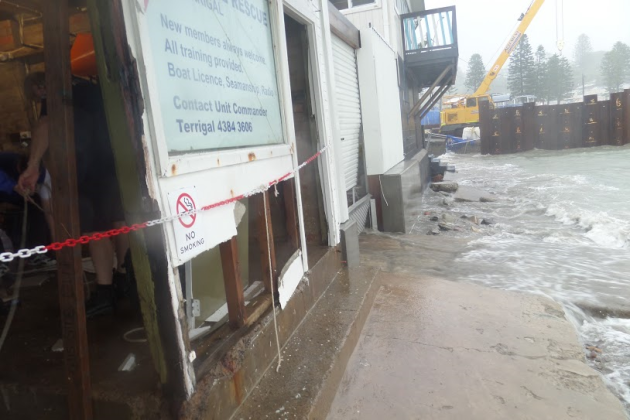 The ocean-front base of Marine Rescue Terrigal took a severe hit on Saturday night as the weekend’s storms powered down the coastline and struck the Central Coast.

“We knew it wouldn’t be good news when we saw the state of the entry doors, or what was left of them. Our fuel tender on its launching trailer was inside the building, but it was full of sea water from the waves that had come crashing in,” he said.

“The bottom of two roller doors have been smashed in and ripped from their guide tracks.

“The main boatshed doors were torn off and both the doors for pedestrian access have been hammered in by the power of the high seas that just kept coming all night.

“One of the structural studs that hold up the upper floor also was split when the boat shed doors were destroyed.

“Temporary repairs have been made and builders are due on site on Monday morning,” he said.

In other storm incidents Marine Rescue NSW volunteers in Coffs Harbour helped rescue a dozen people from their boats moored at a floating pontoon that was torn from the Coffs Harbour Marine at 2.30am on Sunday 50 knot winds. The pontoon was swept up on to the beach.

Volunteers at Marine Rescue Port Macquarie had all three of their rescue vessels out to assist three yachts that broke their moorings and were washed up on nearby rocks. One of the crews was called to clear a BBQ pontoon boat that also broke its moorings and became entangled in the cables of the Hibbard Street ferry across the Hastings River.

“We are ready to assist the community wherever we can and will continue to work with our colleagues in the emergency services as the effects of this weather continue to be felt along the coastline,” he said.