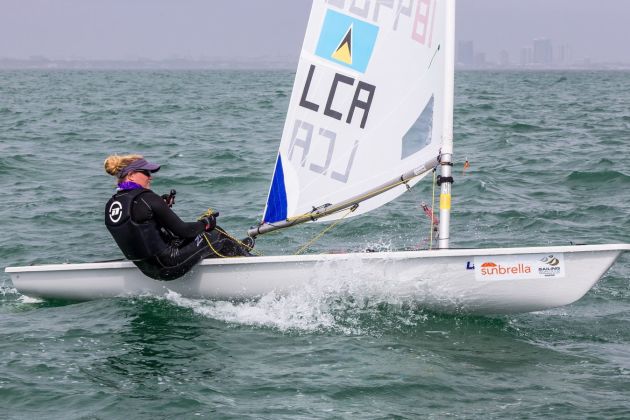 It is the phone call that many can only dream of, but the lucky one on this occasion was Laser Radial sailor, Stephanie Devaux-Lovell.
The St.Lucian athlete has been chosen by the International Olympic Committee (IOC) as one of four sailing Tripartite places, places that are open to enable smaller, less represented countries to participate in the Olympic Games. When she got the news she reacted like so many do when they are overwhelmed with emotion, “I got the phone call and I started bawling my eyes out. It's a great feeling.”

The emotion came at the end of a long road, a road which had its ups and downs for Devaux-Lovell before that all important phone call came. “I've been dreaming of this for about six years and about four years I really started to try hard. I was looking good two years ago when I made gold fleet at Santander [2014 World Championships], but I didn't really have a coach and my level hadn't improved. But I have changed my training strategies now and I'm feeling good.”

The end result, a place on the Rio 2016 start line, really hits home the Olympic feel good factor and the aspirations for a sports person to compete at the showcase event, especially when representing a nation as small as St.Lucia, “It's going to be amazing. There is only three of us going so far from St.Lucia, two high jumpers and myself. So it's a great honour coming from such a tiny island.”

Competing at the next edition of the Sailing World Cup in Weymouth and Portland, Great Britain, Devaux-Lovell will be up against a strong Laser Radial fleet, a fleet which contains all the medallists from London 2012.

The high calibre fleet will give her the opportunity to measure herself against her future Olympic competition but Devaux-Lovell knows it will not be easy and is openly realistic about her World Cup chances, “It's exciting and I don't feel any pressure. I'm obviously an underdog and no one really expects much from me so I'm really just trying to absorb as much as possible and have as much fun as I can.”

If the Tripartite place has given Devaux-Lovell the opportunity of a lifetime and a first Games appearance, on the other end of the spectrum you have some very strong Men's 470 teams in attendance in Weymouth and Portland who have multiple Olympic appearances and medals between them.

Mat Belcher and Will Ryan (AUS) and Sime Fantela and Igor Marenic (CRO) have been there and done it. Now seasoned campaigners and rivals, they gear up for another round at Weymouth and Portland.

Belcher has won multiple world and European titles in this quad, and the only team to beat them in one of the majors are the Croatians.

Speaking of the rivalry Belcher said, “We have had a big battle with them over the years but there are also a lot of other teams that are coming up to the top level now and winning regattas. There is a core group of about five or six of teams that are in for a right battle heading in to Rio.”

Fantela responds with, “It's always been a good fight between us. In Hyères [Sailing World Cup] and the Europeans [Palma da Mallorca] this year we got the better of them and it really motivates us and pushes us.”

The rivalry will continue at the Sailing World Cup, but there is also one eye ahead to Rio as the fine tuning continues in preparation for the first South American Games. Talking about the Sailing World Cup Weymouth and Portland, Fantela said, “We look at it as a preparation race for the Games. It's good to be here as it's an official race with similar fleet sizes with top sailors who will all sail at 100% and this is what we need at this stage.”

Continuing with his goals of the regatta in mind Fantela added, “First is to fine tune and work on our small goals and if the results come they come from that, and if they don't, we learn from that this week.”

Whether it is the Olympic Games or the World Cup, Belcher and Ryan always have a target on their back and Weymouth and Portland will be no different, especially if a team can see this as a chance to take out the World #1 pairing before the summer. But Belcher knows there is nothing anyone else can do or say, it's is down to him and his crew, “We don't really feel pressure from the wins we've had. It gives us confidence to know that we have a level to aspire to of winning a gold but we have been in that situation before and we have risen when we needed to. We put pressure on ourselves and we expect to sail the best that we can and that is more pressure than any other team can ever put on us.”

Looking at both ends of the spectrum for Rio 2016, winning or not, fine tuning or not, Sailing World Cup Weymouth and Portland is a great regatta which offers Olympic sized fleets and one final opportunity to line up against the major contenders before the summer showdown.

Racing kicks off on Wednesday 8 June and will conclude on Sunday 12 June with the Medal Races which will be broadcast live on the World Sailing TV YouTube Channel – http://www.youtube.com/worldsailingtv