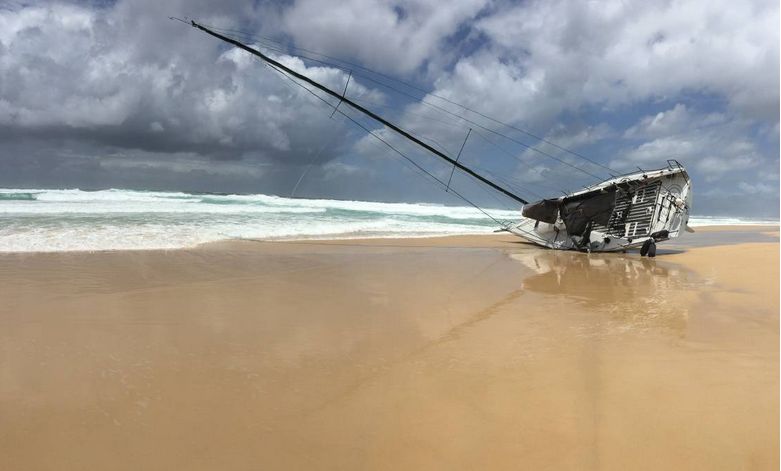 The M3 on the beach near Seal Rocks. Photo supplied.

A Port Stephens volunteer has today been honoured for his outstanding courage in saving the lives of two of his Marine Rescue NSW crew mates during a rescue operation in fatal conditions last January.

Marine Rescue Port Stephens member Mr Laurie Nolan is the first recipient of the prestigious Marine Rescue NSW Medal for Valour, the organisation’s highest award for bravery in the line of duty.

Mr Nolan was today among 21 rescue crew members and communications operators from the Port Stephens unit to receive awards recognising their bravery and skill in a series of emergency operations on January 6 and 7, 2016.

Presenting the awards, Commissioner Stacey Tannos congratulated the 21 volunteers, applauding their commitment to saving lives on the water, no matter the appalling conditions.

Five Mayday calls were broadcast as an East Coast Low battered the NSW coastline on January 6 and 7, with crews of rescue vessel Port Stephens 40, the unit’s communications operators and the Nelson Bay Police Marine Area Command responding to the emergencies throughout the day and night.

A number of yachts travelling through the area were caught in the maelstrom, with the wild conditions claiming the life of sailor Mal Lennon, washed overboard from Amante off Broughton Island as the vessel returned south from the Pittwater to Coffs Harbour race.

Mr Nolan was one of seven crew members on board Port Stephens 40 when it endured a triple knockdown after midnight during the extended operation to rescue the yacht M3, being blown north up the coastline with no power or sails in 50 knot winds and 5-6 metre seas.

As the rescue crew was attempting to throw the yacht a towline to prevent it smashing on to Treachery Beach, near Seal Rocks, a huge wave hit the 32-tonne rescue vessel, knocking it on to its port side and throwing the crew members and equipment around the cabin and deck.

The skipper of M3 later told the rescue crew he could see their vessel’s propellers out of the water as it was pounded by what Mr Nolan recalled as a “foaming wall of water on our starboard side”.

“I had been standing right on the stern as we were hit and ended up under some rubber fenders, hanging out through the railing, wondering how long I could hold my breath with the water rushing right over me,” he said.

“The boat eventually righted itself. Quickly regaining my feet, I realised another wave may hit us again soon. I saw all three deck crew had been swept off their feet. I was just starting to organise the crew to get back inside the relative safety of the cabin when the second wave hit.

“This caused us all to lose our footing once more. Tom Miller had a nasty gash over his eyebrow but managed to get himself free and into the cabin.”

Without thought for his own safety, Mr Nolan went to the aid of Ian Drummond, ashen and in obvious pain from a dislocated shoulder, helping him to free his safety line and reach the cabin.

Realising Paul Sullivan was pinned to the deck by his safety line wrapped around 30 metres of towline and deck furniture, Mr Nolan swiftly grabbed his knife from his belt, severed the lifeline and pulled his colleague to his feet and inside the shelter of the cabin.

After the boat was again knocked flat, navigator Richard Pizzuto realised the heavy duty towline was missing from the deck and swirling in the water only metres from the boat’s starboard propeller.

Knowing that if the rope fouled the propeller the engine would be lost and with it any chance of preventing the boat smashing on to the beach, Mr Pizzuto and the injured Mr Miller worked desperately to haul the towline back on board.

The whole crew rallied to save the vessel. First Officer Michael Smith restarted the port engine, the navigator began plotting a course for home and Mr Nolan worked with Skipper Ron Lighton to guide the boat to deep water and then on the hazardous journey back south through cyclonic headwinds and huge seas.

Shadowed from Broughton Island by Water Police 24, Port Stephens 40 reached its berth at 5.35am after almost 20 hours at sea.

Commissioner Tannos praised the volunteers’ skill and courage and thanked them for their commitment to the safety of the boating community.

“These crew members faced danger and risk with bravery and fortitude, putting the safety of others before their own to fulfil our mission of saving lives on the water,” he said.

“Seasoned crew members with decades of boating and rescue experience rated the conditions among the worst they had seen on the Hunter coast and yet they did not flinch.

“Mr Nolan’s selflessness in saving his fellow crew members from being entangled and dragged under water was the finest demonstration of mateship and the Australian volunteering ethos.

“He is indeed a worthy recipient of the first Marine Rescue NSW Medal for Valour.”

Commissioner Tannos said the rescue crews had been ably assisted throughout their numerous operations by the radio officers in the unit’s base at Nelson Head.

“The professional and composed officers at the radio base provided crucial operational coordination and vital communications support to the rescue crews,” he said.

Five of the award recipients, including Mr Nolan, also were recognised with the Commissioner’s Commendation for Courage and the 2015 Australian Search and Rescue Award for their operation to save two men from the Reef Dragon in Fame Cove in April 2015.

The Commissioner’s Commendation for Courage