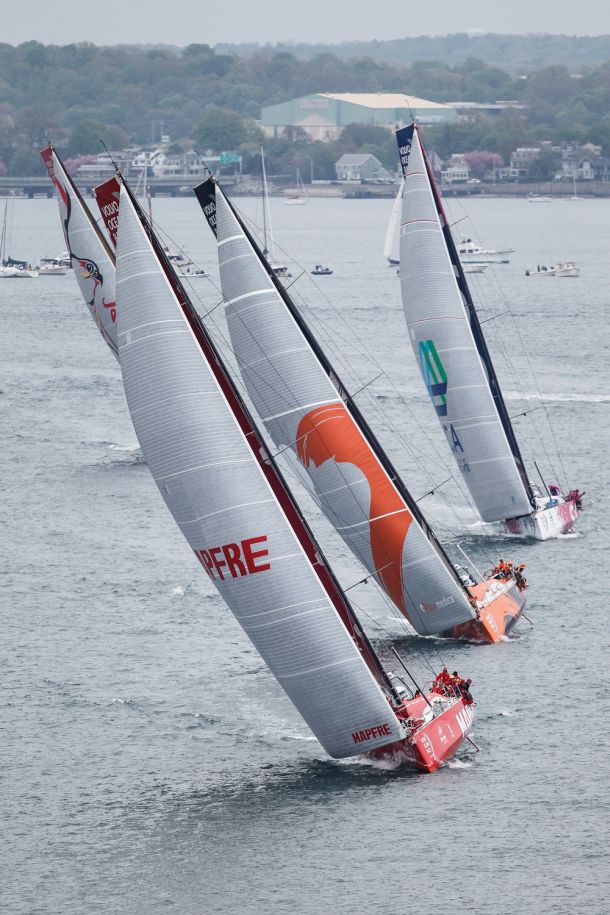 The MAPFRE victory in the Team Vestas Wind In-Port Race Newport, achieved after they grabbed a narrow advantage at the first mark, will be particularly sweet for skipper Martínez who was returning to the crew after missing the previous leg through other commitments.

They were chased all the way by the home-town favourites, Team Alvimedica (Charlie Enright/USA), who were delighted to finish second on the podium, but never really threatened to mar MAPFRE’s day after Martínez led them from an early advantage in overcast conditions.

Abu Dhabi Ocean Racing (Ian Walker/GBR) could be forgiven for being almost as happy with the result as the two boats that beat them, having trailed during the first leg. A positioning error by the women of Team SCA (Sam Davies/GBR) gave them the break they needed to claim the final podium place in third. This result gives them the lead in the in-port race series on 19 points.

Now knocked back to second place, one point behind the Emiratis, Team Brunel (Bouwe Bekking/NED) had an uncharactistically poor start, and seemed destined to bring up the rear until finally edging out Dongfeng Race Team (Charles Caudrelier/FRA) for fifth.

The day, though, belonged to Martínez and his ever-improving MAPFRE team whose win ensured that every boat in the fleet – with the exception of the absent Team Vestas Wind (Chris Nicholson/DEN) – has now won at least one race in this excellent in-port series.

“We are improving slowly and that’s the way we want to do these things,” he said, trying to make his voice heard about the hoards of fans surrounding him. Today we were first and we’re feeling super good.”

The victory will put MAPFRE in an excellent mood ahead of Sunday’s Leg 7 departure for Lisbon, Portugal (1400 EST/1800 UTC). The stage is by far the shortest so far at 2,800 nautical miles, but also potentially treacherous as the fleet crosses the Atlantic.

The boats are expected to arrive in the Portuguese capital of Lisbon in eight to nine days before taking on the final two legs to Lorient, France, and then Gothenburg, Sweden, where the race will conclude on June 27.