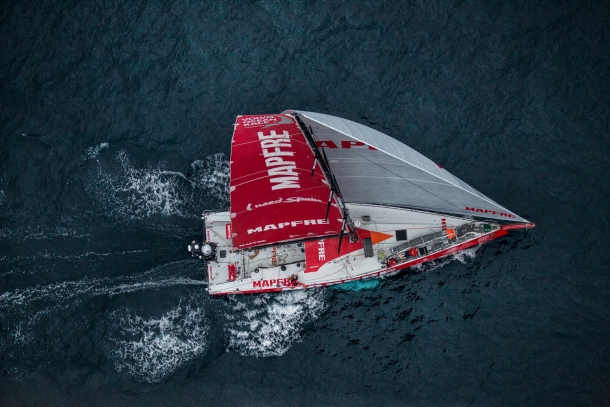 MAPFRE (Xabi Fernández/ESP) put a difficult week behind them to snatch the early lead on the 5,010-nautical mile (nm) Leg 6 from Itajaí to Newport, Rhode Island on Monday.

The Spanish team had two points added to their score (low scoring event) by the independent ISAF jury on Thursday for a rules infringement, and then the crew had concerns about their mast, which they feared was damaged during the treacherous previous leg.

However, their shore team worked alongside the race’s Boatyard staff all night on Friday so that a 100 per cent checked rig was ready for Saturday’s Team Vestas Wind Itajaí In-Port Race won by Team Brunel (Bouwe Bekking/NED).

MAPFRE, under skipper Fernández, finished fifth in near windless conditions and were forced to battle similar challenges the following day as the fleet left Itajaí after a hugely successful stopover.

By 1240 UTC on Monday, the boats had progressed no more than 135nm up the eastern coast of Brazil through a choppy Atlantic seaway, with no more than 5.2nm separating first from sixth.

Nevertheless, Fernández will be happy to be back at the front of the fleet, having followed their Leg 4 win with a second place in the next stage from Auckland to Itajaí.

Onboard reporter, Francisco Vignale (ARG), explained that the light wind conditions had given the crew an unusually easy start to the leg in many ways, despite the challenge of finding gusts to propel the boat along.

“Sometimes at the start of a leg, the whole crew remains active until late in the night, but yesterday two hours into the leg we realised we were ready and started to stick to the watch systems,” he wrote in his daily blog.

“The wind was very shifty and it helped us position ourselves perfectly against Team Alvimedica (Charlie Enright/USA), which was on our bow, so we could lead on the way out of Brazil.”

The boats are forecast to arrive in Newport for North America’s only stopover between May 6-9, after 17-20 days of sailing.

Although Abu Dhabi Ocean Racing boast a seven-point lead at the top of the standings, there is still 45 per cent of the points to sail for after five out of nine legs.