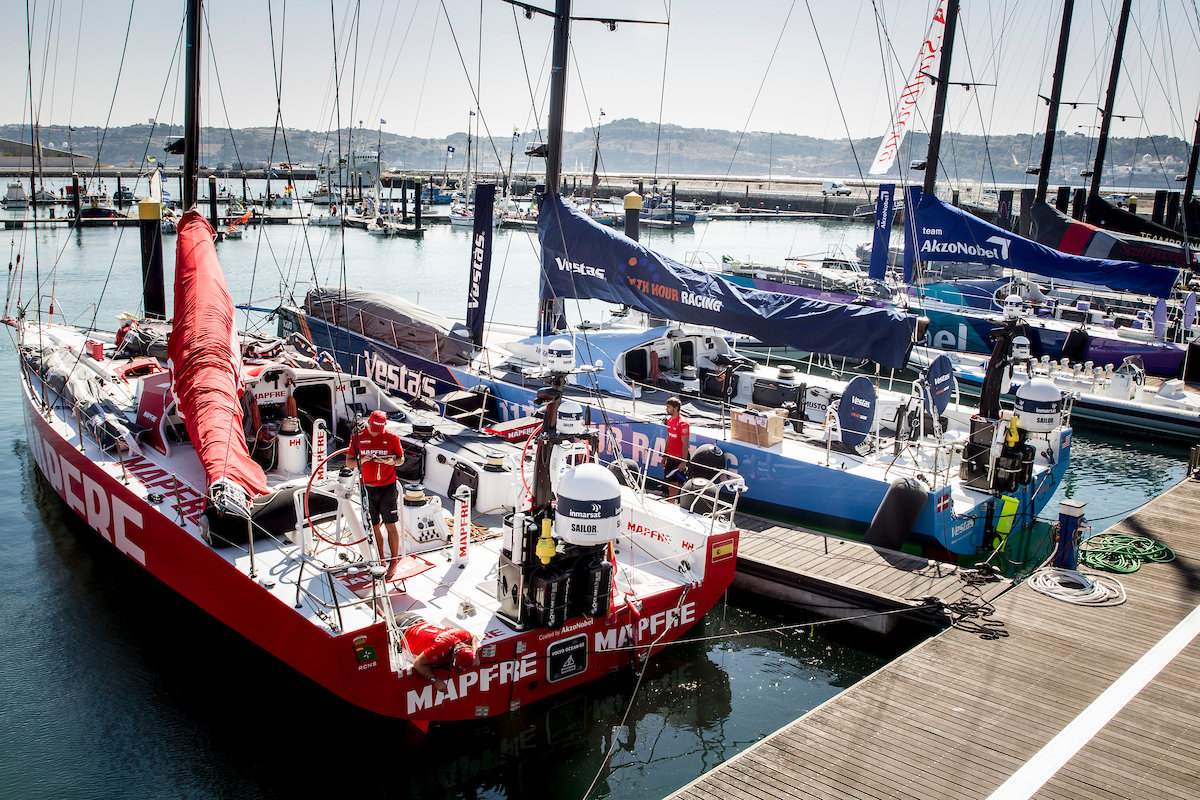 On Sunday at 14:00hrs local time (13:00h UTC), the start of the Prologue Leg of the Volvo Ocean Race 2017-18 will start from Lisbon when the fleet will sail from the Portuguese capital to the start port of the round-the-world race, in Alicante.

The leg is non-scoring, yet by no means will the crews be relaxing, as MAPFRE’s navigator Joan Vila explains, “I'm preparing for this in exactly the same way as for any leg of the round-the-world race.”

How important is the prologue leg if it is non-scoring?

Despite the fact that it is practically the first leg of the race, but in reverse, Vila’s viewpoint is that, “It is important to know how we measure up to the rest of the teams. Leg zero was really good for us, to confirm we were continuing in the same direction, and although this doesn’t count in points, we are now obviously almost at the start.”

This will be the last chance for the seven VO65s to check their boat configuration and gauge their performance against the others.

“We haven’t sailed against the others since August, and we will need to see how we have all evolved in the last two months,” explained the team’s Skipper Xabi Fernández.

However, it is not the only reason. The Prologue will be vital for team morale ahead of the race start in Alicante. The first coastal race is on 14th October, and the Volvo Ocean Race starts on 22nd, with the first leg heading to Lisbon.

What does Xabi have to say in this respect? “I completely agree. In fact, it is why the leg is so important, and we have prepared for it as if it were a scoring leg. When we sail well, it is good for everyone, and it strengthens everything we have done. If we don’t do so well, it is a warning.”

His navigator also agrees: “Although the leg is non-scoring, if you do a good job, it shows that the boat has been well-prepared, and gives the team confidence. For this reason it is important, even if on paper there are no points to show for it.”

Rob Greenhalgh, one of MAPFRE’s watch captains, and one who has already tasted victory in the race, is greatly looking forward to the team being able to measure themselves with their rivals.

“It’s a really important moment, and all the teams will be studying each other carefully,” he admits. Yet on board the Spanish boat, the team are really looking forward to sailing well, and to feeling satisfied on arrival in Alicante ahead of the final sprint.”

One of the novelties in the race is that all of the boats will be sailing with new racing sails, for the first time.

“All the boats have a new set of sails, and each team will be leaving with the same weapons,” explains Vila.

“We will have a racing configuration, but likewise, the others will also be more prepared. In Leg Zero there were many people who had joined the boat just a week before.”

The route
Despite the fact that the Prologue leg was due to be fast, the first stages of the leg will be slow due to lack of wind. The crews will need to summon all their patience to sail out of the River Tagus, head to San Vicente and onto the Gibraltar Straits.

It looks like things will pick up from there onwards, with predictions of a Levant (easterly) wind that may reach over 20 knots.

So what is all the fuss about the famous “Levant” wind?

Once again, Joan Vila explains, “When the wind picks up enough strength, it has an acceleration effect in the Straits. It is very gusty and can reach storm strength, making it one to be feared, you could say.

“It creates an acceleration effect between the winds from the Spanish and the African coasts to leeward, and where there are higher gusts you can easily jump from 20 to 30 or 40 knots in no time at all, and then see it drop again.”

The Barcelona-born navigator has worked a lot on this particularly area of the route, which has heavy merchant ship traffic, and runs in the middle of the Almadraba tuna fishing zone (an artisan fishing technique which traps and catches the tuna in a labyrinth of nets, when migrating to and from the Atlantic and the Mediterranean).

“I have worked and studied the meteorology and currents, both for the Tagus, the Straits and the Almadraba area, and looked at potential dangers. It is also valid information for the first scoring leg of the Volvo Ocean Race.”

Once past Gibraltar and into the Alboran Sea, there are just 300 miles to Alicante, which will be upwind. The wind is due to be moderate and will drop as the fleet get towards the end of the Prologue leg. Reaching Alicante will be painfully slow, as the predominant wind in the East is very light.

If the predictions are correct for the fleet, they will arrive in Alicante on the evening of Wednesday 11th October, just after the opening ceremony of the Race Village. But only time will tell.