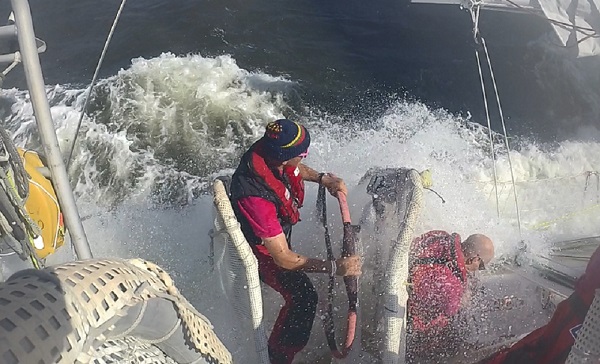 The Clipper fleet is underway in Leg 2

It’s been an action-packed second day of Leg 2: The Stormhoek Race to the Cape of Storms – and in the past 24 hours one team was forced to suspend racing while the rest of the fleet continued its fast passage across a turbulent South Atlantic Ocean.

The difference between first and eighth has more than doubled from 10nm (nautical miles) on the first day to 25nm, with a top three now beginning to emerge.

For the second consecutive day, Dare To Lead fronts the fleet, though Liverpool 2018 trails by just 2nm.

Dare To Lead skipper Dale Smyth, who has played his Joker Card for the race to his home port of Cape Town, says: “It has been a constant jostle between ourselves and Liverpool 2018 since we left, as we overtake each other turn for turn, and again the density of the fleet shows how evenly matched these boats are.

Looking ahead to the next 24 hours, Dale adds: “We have to transition the passage of the cold front soon as we cannot keep up with its pace, so that should be quite tactical as the wind backs southwest. Anyway, after reeling off 420 miles since departure, we are happy to be making great progress.”

Visit Seattle makes up the top three, though it is fighting off a strong challenge from Greenings.

Greenings currently sits in fourth place and is less than 3nm ahead of Garmin in fifth. Interim skipper, Andy Woodruff, reports: “It’s been another 24 hours of powered up reaching in 25-35 knots of wind, with boat speeds often above 15 knots and a top speed of 23.5 knots. We have been following Visit Seattle, who was in sight for last few hours, but we have appeared to drop behind a little now.”

Qingdao fell from third to sixth overnight, after opting for a more northerly course compared to the rest of the fleet, while less than 1nm separates the seventh placed Sanya Serenity Coast from the eighth placed GREAT Britain, which are now both around 25nm off the pace.

Sanya Serenity Coast skipper Wendy Tuck describes how tight the racing is, saying: “We are trucking along, but so is the rest of the fleet. There has been some great surf today.

“Our start yesterday was pretty ordinary and it has left us in a pretty ordinary position, but with still over 3000 nautical miles to go, we can at least give it a shot to catch the leaders.”

HotelPlanner.com, Nasdaq, and Unicef are close in the standings in ninth, 10th and 11th respectively, but Unicef’s tactic of going further south could soon pay off if it picks up stronger winds.

Unicef skipper Bob Beggs reports: “The pace still continues. I even had a trick on the helm so as not to miss out on the surfing. My best speed for my time on the helm was 20.5 knots but I'm sure that has been surpassed by later helmsmen.

“Progress is good and the weather shows no appreciable let up in the wind so we are looking forward to a fast and safe successful race.”

Clipper Race Meteorologist Simon Rowell says: “It’ll be interesting to see how long the north group can stay ahead of that next front. While the good winds ahead of it are with them, it will be overcast and showery.”

He adds: “Looking ahead, there are some interesting tactical choices coming up with the two lows.”

PSP Logistics is due to arrive back in Uruguay today, after being forced to suspend racing yesterday in order to repair damage to its starboard rudder, following a collision with a whale. No one is hurt and there is no risk to the yacht.

Skipper, Roy Taylor, says: “Despite the great disappointment, I can take great pride in the way the team dealt with this setback and their attitude since.

“Lots of great ideas and suggestions came flooding in from the team, as clearly the content of their ISAF training came flooding back to them.

“We are now 65 nautical miles from Piriapolis (near Punta del Este), Uruguay, where we are due to be lifted and repaired. We then hope to be underway as soon as we can, and then avoid whales on the passage to Cape Town.”