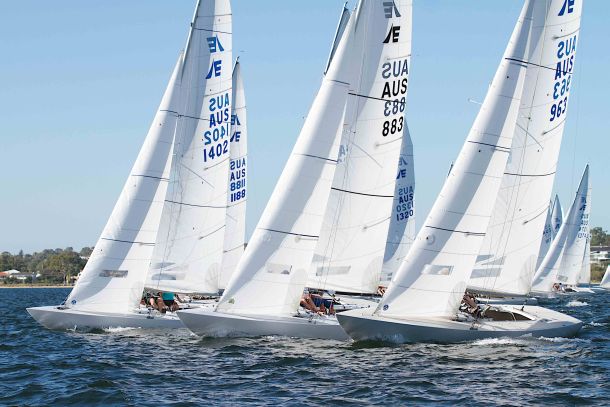 At the end of the first day of racing in the Etchells WA Championship, Michael Manford has a solid lead over Peter Chapell with Martin Webster holding down third place.

It was an interesting day’s sailing on the Swan River. An early morning start guaranteed a reasonable easterly breeze for the first race. It produced a surprisingly orderly start and few surprises as Manford and Chappell took the quinella.

By the time the second race start sequence began, the breeze had dropped significantly, a bad omen since this normally precedes an eventual shift to a south westerly sea breeze. Worse was to come, with two successive general recalls using up valuable time in the fading breeze. Alistair McMichael and John Grieve were forced to sit out race 2 as the result of a black flag disqualification and the race committee was forced to shorten the course in order to beat the time limit. Five yachts elected to work the north side of the course to take full benefit of an unexpected patch of breeze, to clean up handsomely while the bulk of the fleet struggled for breeze in the middle of the course.

There was no third morning race and the duty boats towed the fleet back to the clubhouse.

The afternoon program began at 4:30pm in a beautiful 12-15 knot sea breeze and bright sunshine, set up for two races back to back. Apart from a minor mishap when a crewman fell overboard after slipping on a headsail between races, it was regulation sailing. Manford chalked up two bullets, Chappell a 7th and a second and Brad Sheridan was always up with the leaders to score a third and a fifth.

So with more easterlies forecast and a three race morning program on Sunday, the State title race is going to be an interesting affair.

Watch for the full wrap tomorrow.