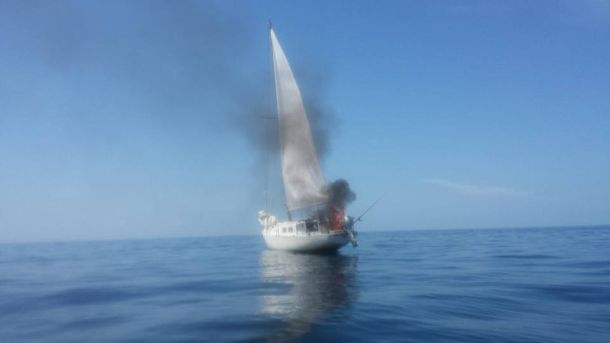 John Kanafoski was rescued by the US Coast Guard off Florida after his small yacht caught fire and he abandoned it to save his dog. The coastguard reported that Kanafoski was found 69 miles west of Hudson, Florida.

The man and his canine companion abandoned ship and boarded the sailboat's dinghy after the boat caught fire, the Coast Guard said.

“There was a lot of smoke and not much left of the boat but it definitely made it easier for us to spot,” the Coast Guard's Erick Leib told NBC affiliate WFLA. “He contacted the Coast Guard. He put his life jacket and gave a good position to where we could locate him.”

Kanafoski posted this heart-wrenching story on his Facebook page after the incident:

As I'm sure you all know by now, my boat and everything I owned was on there. All my tools, clothes, identifications, green cards everything was lost.

Friday morning, yesterday the wind had died around 10 am. I motored around and was bottom fishing and swimming around the middle grounds. 80 miles offshore. Around 2 my outboard stalled and would not crank. I replaced the fuel filter and both spark plugs. Good spark and no fuel. The primer ball was mushy. I had an inboard motor still inside with the fuel pump for that engine on the fuel tank plumbed to the outboard. I flipped on the electric fuel pump and was able to get the engine running.

I traveled due east trolling to the edges of the 120 ft mark. The motor died again. I reached for the fuel pump switch and flipped it and the bilge blower fan switch together. Boom. The back port hatch blew open with a massive fireball. The fire blew the dog off the boat and me out of the cockpit down into the companionway. I was dazed I could amell burnt hair. I jumped up and as the ringing in my ears subsided the roar of the fire became clear. I also heard a splashing. Dog's in the water.

I immediately reached into the burning hatch to grab the fire extinguisher mounted next to the fuel tank. I burned arm. I discharged the first fire extinguisher and thought the fire was out. I grabbed the main sheet line and jumped overboard after the dog. The sails were up and the boat was slowly moving.

The sheet was my lifeline. I grabbed the dog and swam back/pulled myself back on board. I got onboard and saw a small flame so I popped extinguisher 2.

I immediately started opening hatches and removing companionway stairs for access to the bilges and engine room. While I was looking around I found another small flame under the access hatch to the stuffing box. I grabbed fire extinguisher 3. When I hit the lever all I heard was a swoosh but no familiar yellow powder. The can was caked.

The wind gust from the tank blew the small trash fire thru the entire fan tail sending little embers everywhere. I started the wash down pump and grabbed the remaining two extinguishers out of the Vee berth. By the time I got to them and dug them out from under the pile of tools and clothes and returned to the back of the boat it was too late. The flames were coming from the loose fiber stands of fiberglass resins that are laminated the floor to the hull.

I pointed a full stream of sea water at 65 psi and discharged two more extinguishers. Five in total. There was snoke but I saw no fire. I called the coast guard imformed them of my situation. I told them about the fire and how it was now out. 10, 15, 20 minutes passed and I had cleaned all the yellow powder out of the cockpit and started to try to find the sorce of the first explosion. Still smoke, no fire.

I went into the Vee berth to grab my multimeter and some tools. As I was digging in the tool bag I heard a lite roar coming from the rear of the boat. I ran to the back to find the entire port hatch in flames. The same hatch that was holding a 13 gallon plastic fuel tank half full. I pointed the water hose at the fuel tank, turned OFF the bilge and called the coast guard back. But I was getting no response back.

Within 30 seconds of calling I realized I had to abandon ship. I put out a mayday, gave my position. Drift bearings, boat info, and name. No response just static. I started looking for the bailout bag. And started grabbing anything I thought I might need. And threw it between the book bag I had and the ditch bag.

I called mayday again no response. Cabin was full of black smoke and the dog was missing. I threw the ditch bag over board. I then tied a life jacket to the bookbag and threw it overboard as well. I couldn't find the dog and there was only about a foot of clear air near the floor.

I knew if I didnt find her quick that the smoke would get her. I tossed the entire Vee berth into the cabin floor so now I was tossing everything back on the Vee berth. I found her and she was OK. Terrified but OK.

I opened the forward hatch to go out of the front of the boat. As soon as the hatch opened the black amoke rushed out and the flames followed the smoke right onto the right side of my arms and face as I was going out the hatch.

The dog had her wiskers and eye brows burned. My right arm and a little of my face were flame kissed. My beard and hairy arms were scorched but just the hair.

Me and dog are now in dinghy. I started collecting the stuff I threw overboard. Bags, water, towel hat. Bookbag, etc.

I couldn't find the ditch bag. It sank.

I had no radio, no gps, no flares and no way of knowing if anyone even heard the abandoning ship mayday. I never heard a respose.

The boat burned fast and the sharks were there within minutes. They weren't lying when they said sharks come to fuel oil and burned boats. They were small but there were three.

Thank god the Coast guard jet flew over within an hour and within another hour I was in a basket getting snatched out on the water. I didn't know if anyone heard my call. I made peace with my maker during the search thru the smoke for the dog. I thought I was going to suffocate looking for her. I was thinking of my kid.

Also when I was drifting. I realized my call may have not been heard. I was 70 miles offshore and VHF only runs about 30. I said a prayer and thought about the best times I had with my son. I mentally prepared myself to die not once but twice yesterday. I was adrift in a dinghy. I could barely breatha and had no water or shade or even a paddle.

Dire situation 1. Dog in water or flames. If I would have stayed onboard and sacrificed the dog the outcome would have been different. No regrets tho.

#2 I opened all the hatches looking for fire and left them open. Unfortunately that is what lost the boat – fresh air was being fed to the flames.

#3 Ditch bag. I had VHF, gps and flares, first aid in the ditch bag. It was not a floating bag.

4# No automatic fire extinguisher in the fuel compartment.

Anyway. I'm done. I would rather not talk about it for now as all I have been doing is crying when I think back on it and that bullshit isn't getting me anywhere. Save your questions for next week.

I'm at a thrift store trying to find shoes. I'm walking out of St Pete up 19 north. If you know anyone heading north tell them to stop and grab the guy carrying the dog and lifejacket. I'm sure I'm the only one.

I was able to receive a small wire transfer last night so I ate, fed the dog and split a room with a street walker. Now I'm waiting on the thrift store to open and I'm trying to figure out how to get to Rome, Georgia. Or anyplace safe to rest my burned feet.