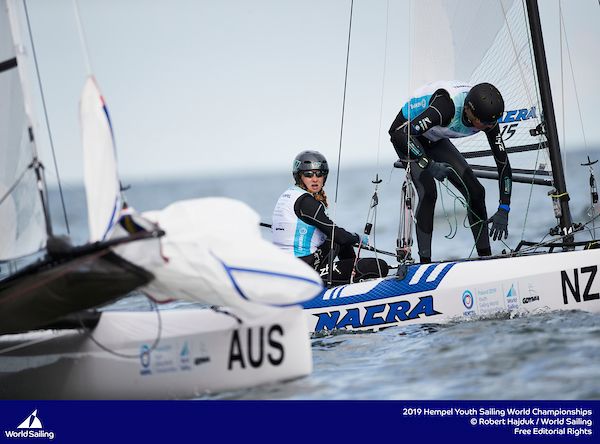 Having sat ashore waiting to race and subsequently unable to because of minimal breeze on Monday, the Girl’s 29er and 420 fleets as well as the Boy’s and Girl’s RS:X finally hit the water for racing and the Maltese sisters shone in the 29er.

Gdansk Bay, just off Gdynia in Poland, was full of the sights and sounds of the 2019 Hempel Youth Worlds, the 49th edition of the prestigious event, and a more stable breeze enabled each fleet to complete a good number of races.

More than 400 sailors from 66 nations are racing on boats supplied by Ovington Boats (Boy’s and Girl’s 29er), Nautivela (Boy’s and Girl’s 420), Laser Performance / Maclaren (Boy’s and Girl’s Laser Radial) and Nacra Sailing (Mixed Nacra 15). The RS:X racers are sailing on their own equipment for 2019. Even to make it to the Youth Worlds is an achievement in itself with only one nation represented in each fleet.

The Schultheis sisters, racing at their second Hempel Youth Worlds together, were models of consistency in the Girl’s 29er. Four races were completed on Tuesday and the pair recorded a (5)-2-3-3 scoreline which positions them at the top of the leaderboard, a point clear of Berta Puig and Isabella Casaretto (USA).

On their day, the sisters commented, almost in unison, “It was super shifty today but the wind increased. We sailed constant and well and are happy with our result.

“It was quite choppy. It was difficult to keep the speed up because sometimes the boat just stopped. We are quite light so it’s a bit easier for us to get over the waves. We’re satisfied with our performance. We were consistent.”

At the 2018 edition of the Youth Worlds in Corpus Christi, Texas, USA, the pair finished a credible tenth and have understanding of the event and its prestige. They concluded, “We’re really happy but we’re not getting over excited. We’re just going to keep our cool. Our aim was a top five and we’d be happy with that. We just want to have fun.”

Great Britain’s Freya Black and Millie Aldridge are also racing at their second Championships and occupy third place after the opening day. After racing, Black commented, “There’s a lot of good girls here. The Americans, Maltese and Swedish are going to be the ones to watch. There’s more variety here and it’s all to play for. We’re really happy with today.”

The Boy’s 29er added another three races to their overall total. The defending champions Mathias Berthet and Alexander Franks-Penty (NOR) moved up to first overall after a consistent day. They notched up a 3-1-3 scoreline and have moved ten points clear of overnight Ville Korhonen and Edvard Bremer (FIN) who had a mixed day. British racers, Ewan Wilson and Finley Armstrong, occupy third overall.

American sailors have had a stranglehold on the Girl’s 420 for the last two editions of the Youth Worlds as Carmen and Emma Cowles won gold in Sanya, China and in Corpus Christi. As the Cowles sisters aged out of youth competition and moved into the Women’s 470, the weight of the nation has been put onto Madeline Hawkins and Yumi Yoshiyasu.

The Cowles sisters passed on words of wisdom to Hawkins and Yoshiyasu and those words paid off as they took two wins from three races and lead overall.

“They [Carmen and Emma] talked to us and the boys team and gave us a bunch of tips on how to set up the boat and how to come in with the right mind set,” commented Hawkins. “We’re sharing the same boat with the boys so we’re not used to that and they gave us tips on how to deal with that.”

It’s the early stages of the competition but the Americans are five points clear of Kana Kobayashi and Natsumi Shirasu (JPN) and Therease Stenlein and Lina Plettner (GER) and have a strong mental attitude which could take them all the way. Yoshiyasu concluded, “We want to stay as consistent as possible and have a positive mind set. There’s a lot of races and people will make mistakes.”

After an opening day that saw minimal separation in the Boy’s 420 fleet, gaps have widened after two further races. New Zealand’s Seb Menzies and Blake McGlashan moved up to first overall after a second and a fourth. Spain’s Martin Wizner and Pedro Ameneiro (ESP) sit second, two points off, and the overnight leaders, Achille Casco and Elliot Schick (SUI) dropped to third.

In the Girl’s RS:X, Israel’s Linoy Geva put a disastrous start behind her to win back to back races. In the first race of the series, the Israeli racer received a scoring penalty and counted maximum points from the race but she bounced back to claim two bullets. She holds the lead, having discarded her 21st, but will have to tread carefully throughout the remainder of the event.

The Boy’s and Girl’s Laser Radial fleets only completed one race on the opening day and sailed three on Tuesday to catch up on their schedule of races.

Poland’s Tytus Butowski has come to the forefront for the home nation and grabbed the lead in the boy’s division. His 3-5-7-(10) scoreline positions him one point clear of Wonn Kye Lee (SGP) and a further two ahead of Juan Cardozo (ARG), silver medallist from 2018.

In the Girl’s Laser Radial, overnight leader Chiara Benini Floriani (ITA) had a mixed day with a 3-7-(22) scoreline but that was enough to hold onto the lead. Laser Radial Youth Girl European Champion Ana Moncada Sanchez (ESP) sailed beautifully, recording a 4-4-5 which positions her in second. Shai Kakon (ISR) is third.

In the Mixed Nacra 15, Will Cooley and Rebbeca Hancock (AUS) are standalone leaders after another day fighting it out at the front of the 21-boat fleet. Two fifths and a fourth puts them a point clear of France’s Titouan Petard and Marion Declef who claimed the second race win of the day. Further race wins went the way of Germany’s Silas Mühle and Levke Möller and Switzerland’s Arnaud Grange and Marie van der Kling (SUI).

Racing is scheduled to commence at 11:00 local time on Wednesday 17 July as the Hempel Youth Sailing World Championships reaches its mid-point.