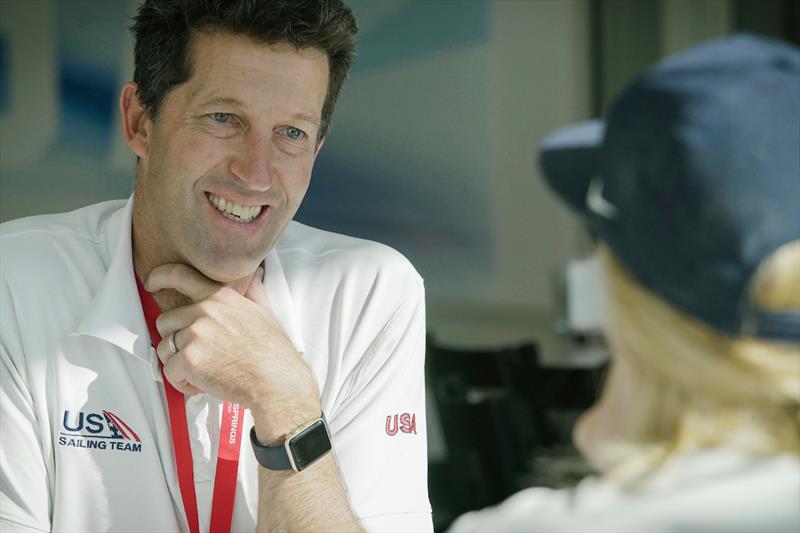 It was almost exactly a year ago that Malcolm Page, a double gold medallist in the 470 class for Australia, took the reins of the US Sailing Team – and wth winds in excess of 30 knots keeping all 10 classes on shore for the entirety of Day 4 of the World Cup Series Miami, USA – we took the opportunity to connect with Page, the Chief of US Olympic Sailing, for some reflection on his first year on the job and a look ahead to the Tokyo 2020 Olympics and beyond.

You're approaching your one-year anniversary with the US Sailing Team. What's your assessment of your first year at the helm?

There are some success and there are some going slows. There's always a little bit of naiveté when you start something fresh and you're very gung-ho. Looking back now, there's less surprise. The shift that I'm looking to bring is not easy; it's a hard pill to swallow sometimes.

Regarding that shift, what's the biggest stumbling block?

For me the biggest component is that we want to shift to a system where the US Sailing Team, armed with proven coaches and experts in key areas, is guiding athlete performance and strategy. In the past, we've had an athlete-driven system, and there was often not much coordination and teamwork between American sailors. We must show these talented young athletes what is required to win; and how to do the job right.

You said shortly after taking the job that you hoped to get two medals in Tokyo in 2020. Has that objective changed at all?

Increasing our medal count in Tokyo and beyond is our clear objective, and it guides all of our decisions, both long and short term. We want to not only build a program to win medals in this Olympic cycle, but to create a sustainable system that reaches from the youth level, to the Olympic Development level and then to the US Sailing Team level.

How do you measure the progress toward that goal?

I guess what we try to work on every day is a process and focusing on performance and the ultimate measurement is results. Throughout any year, you'll have your peak event and more minor events and you might have a second mini-peak in your off-season. To get that peak success you've got to look at each individual athlete, what they require, where they are in the development process and design the program around them. A great example is what Caleb Paine has done since Rio. He more or less took the first year off and then slowly worked himself back into Finn sailing. He started that by building his body back to weight and fitness, then started sailing periodically. Then in early December, he got back into the boat full-on with other boats as a reference.

The early results are promising. He's right back among the best in the world at this event.

Caleb is coming back stronger than ever. He really impressed me in that the success he had in Rio hasn't clouded his ability to view where his weaknesses are.

Let's look at another class. In the Men's 470 you have one very strong team—Stu McNay and David Hughes, fourth at the last Olympics—where as in the Women's 470, it's all young teams mostly starting their first campaign. How do you design a program that can develop medal-winning talent in both?

I normally break it into two sections. When you look at it from an equipment standpoint, some of the projects you need to do can be done in unison, though, of course, we need to tailor to the crew weight of each individual team.

For the men, it's about our athletes working on their weaknesses and refining their ability to go from top contenders to medal achievers. For the women is about going for more of a grass-roots approach. Realistically you've got to look at making this a 2024 project and getting all these women to work together as a mass group. Teams will be more fluid and raising the tide from a USA perspective is more important.

Like many Olympic sports, the team concept is a challenge with sailing. These sailors who are working together now will eventually have to battle one another for the Olympic berth. How do you make team atmosphere work?

That is probably the biggest cultural shift I'm trying to achieve. If I look at individual classes, I feel we have success in some examples and disappointment in others. When I look at a youth perspective, the ODP in particular, I think this has been a huge success. The youth teams are working together and creating strong fleets, which is allowing them to achieve international successes such as the recent Youth Worlds, where we earned three medals and had one near miss.

The new generation of sailors that are just getting into it have that approach; they all understand that they've got to work together to better. It's probably the older seasoned athletes that have trouble with that. And in saying that, it's only 20 percent of those.

Two great examples of that are with the Laser Radial, with Paige (Railey) coming back now and working really strongly with Erika (Reineke), and the Nacra class with Bora (Gulari) and Helena (Scutt) working really well with Riley (Gibbs) and Louisa (Chafee).

What's your opinion of the U.S. feeder system, particularly the role of scholastic and college sailing? It's vexed many people in your position.

There are always two sides to the coin. The opportunity that the United States system can provide to our sport and success is huge, but on the flip side, life expectations, educational expectations, career expectations are just as big and can pull people away from sporting success. Bridging that gap is a key part of a system that we need to build. I guess we're very much at the infancy stage of that, but we're focusing on it heavily.

When I look at the junior level, there's no country that produces as much talent as the USA. When you look at the college system, it's a very professional system that has some great skill building in some areas of the sport.

How do they dovetail their career with their sailing? It's something on which that we're working really closely with the USOC. We have a couple of business mentors that are coming on board to help us design a program that goes around this. When we do launch it, it will have its own system that will build trust with the parents and the young athletes.

It's happened in other sports already. Why do we have to reinvent the wheel? We have an amazing partnership in the USOC, which has a connection to these other sports and has developed the ACE—Athlete Career Education—program, and they're helping us bring that to sailing. I know we can do a lot better than we have in that regard.

There is a lot of talk about the evolution of the Olympic classes for 2024 and beyond. What's the team's position on that?

US Sailing obviously has many people in prominent positions at World Sailing level, on different committees, on the council, on the board. So US Sailing is very well positioned. Hearing what information is coming forward, I trust that the council will make the right decision to take our sport forward. From a US Sailing Team perspective, we have our classes that have had immediate success and ones that aren't as strong. But my opinion is that it doesn't matter what classes are in the Olympic Games. We still have the right talent and all the resources, we just need to build our system that will ensure our sailors develop the skills necessary to have success no matter what the equipment.