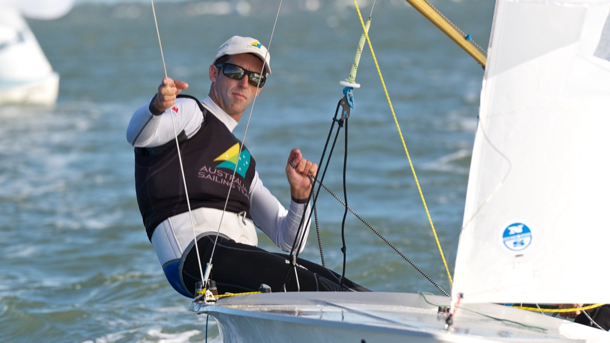 With two gold medals to his name, Malcolm Page is Australia's most successful Olympic sailor. Add in his six World Championships in the class and he has the best record of any 470 sailor ever.

Now the International Sailing Federation (ISAF) is gambling that Page will bring all the qualities that made him such a success on the water to his new role as their Head of Media and Marketing, based at their offices in Southampton.

This magazine and ourmysailing.com.auwebsite
have been vocal critics of ISAF over the years, so Page sent a firm signal by choosing us for his first major interview about the role. He has never been one to shy away from the hard decisions and was his usual self in the interview – polite, conciliatory, diplomatic but very firm in his answers and his defence of his new employer.

Page says that 90% of what ISAF does is very good. But he concedes that they have not been good at getting that message out to their constituents. And that, he says, is a major part of his new role.

Page is an ideal person to represent ISAF in its Olympic Sailing area. He retired from competitive 470 sailing in 2012 (while still racing on bigger boats) and continued his involvement as a member and later chairman of the Athletes Commission. He understands the needs and frustrations of Olympic sailors and one of his first tasks is to help commercialise the Olympic events and ISAF generally.

“I think the Gazprom sponsorship is probably the first time ISAF has had a true commercial partner,” he says. “There have been in-kind sponsorships but this is probably the first time we have been given a chunk of money with virtually no strings attached. They want us to use some of it to promote youth sailing in emerging nations, but the rest we can use as we see fit.

“I want all the top Olympic sailors to be able to sustain themselves financially. I know the opportunities I passed up and the sacrifices I had to make to achieve my Olympic dream and I don't want others to go through that.

“The solution is to improve sailing's position and make it secure within the Olympic movement and to commercialise our World Cup and other events so that athletes can make a career from it,” he says.

The recent World Cup at Hyeres shows that some of ISAF's initiatives are already bearing fruit. In the past these events have been hard to position as “world's best” because anyone could compete and most of the top sailors didn't bother. Instead they would sail professionally on a TP52, an RC44 or a Farr 40 to accrue some funds to finance their Olympic campaign.

At Hyeres, ISAF invited the top 30 sailors or teams in each class, with 10 wild cards. Unless you were near the top of the tree, you didn't get to compete. Page says that of all the invitations sent out, only one was declined and that was for health reasons.

“I think it worked very well. Teams were using different scenarios to make the top 30 – a lot of athletes went to extreme efforts to make it.”

But perhaps the biggest change is that there was prize money on offer. The winners banked decent cheques for their week's work and could see that the World Cups could sustain them on their path to Olympic glory.

“We consulted with the sailors at the event and they were very supportive of what we doing. There weren't many questions, which I think is a good sign,” he said with a laugh.

Another initiative, and an area where Page needs to put in a lot of work, is increasing the exposure of sailing particularly through television, so the top athletes are recognised by the general public.

ISAF has let a contract to Sunset & Vine, who specialise in sailing TV, and they broadcast the Hyeres World Cup live into the USA and France. Part of Page's role is to continue negotiations with other countries, with the aim of having live TV in all the sailing nations.

Asked whether this will happen in Australia, he said that World Cup finals races can already be watched on-line on the ISAF channel but obviously he will speak with Fox Sports and other possible outlets with an aim to increasing sailing's presence in this country.

As we alluded at the beginning of this article, ISAF's image with its core constituency hasn't always been good. A disastrous ISAF World Championships in Santander, where appalling race management and media relations caused widespread criticism, the rankings system and a perceived “jobs for the boys” mentality have seen the organisation on the defensive.

Page says that many of those issues are already being addressed. “Carlo Croce (the ISAF President) says ISAF has to smile more. We want people to trust what ISAF is doing.”

He concedes that the rankings system he sailed under was seriously flawed. It rewarded those who sailed the most events, resulting in people who couldn't make the medal race at major championships being declared “World Number One” in their class. At its worst it ranked Olympic 49er champions Nathan Outteridge and Iain Jensen at 47th in the world!

While there is still room for improvement (current world 49er champions Peter Burling and Blair Tuke were ranked only 5th in the last rankings) Page says the new system is working and by 2017, when historical inconsistencies are finally removed, it will be an accurate reflection of the position the best sailors fill.

He says the issue of massive sub-committees, where long-serving administrators are rewarded with trips to the ISAF twice-yearly conferences, have also been addressed. In an article posted on mysailing during the Santander fiasco, we highlighted that there were 17 committees and 45 working parties with a total of 237 members. One working party comprised 15 members, making any worthwhile decisions impossible.

Page says that Carlo Croce has been working through this issue to amalgamate some committees, reduce the number of members and shorten the annual conference, thus saving vital funds that can be spent elsewhere.

Although he is fiercely loyal and will obviously defend his employer, I know Malcolm Page well enough to believe that if something is really wrong he won't sugar-coat it and will take steps internally to demand a fix.

So how well can a leading athlete make the transition to sports administration? In Page's case, very well.

As referred to above, he already has runs on the board after serving on the Athletes Commission while still an Olympic sailor and eventually rising to the chairmanship of that important body. (One of his goals in the new job is to get a sailor on to the IOC Athletes Commission.)

It is no secret that Page wanted a job with the High Performance unit of Yachting Australia when he retired, and owing more to personality clashes than lack of an appropriate role, he was denied the opportunity.

“Yes, I was disappointed that it didn't work out,” he says candidly. “I went back into IT and was earning good money. But I woke up every morning asking myself why I was doing it. I just wasn't passionate about it.”

His wife Fiona organised a meeting with an executive coaching consultant who had him undergo testing to identify his values in a work situation.

“I guess there were no surprises when it showed I'm not motivated by money or fame, I just want to be doing something that I perceive is worthwhile,” he reported. The consultant identified his best career path lay in sports management and when the ISAF role was advertised, he pursued it and was appointed.

“I still dream of working with the Australian team again some day. I talk to all the sailors, I follow their progress, I'm really passionate about it. But meanwhile I've got this great opportunity and I'll be putting my heart and soul into making it work.”

Malcolm and Fiona left Australia in early May to set up home in Southampton, where their first child is due to be born at the end of September.

It will be a wrench to be away from family and friends but Page takes solace from the fact that there are some reasonable sporting events happening in the UK over the next 12 months. Australia is tipped to do well in both the Ashes and the rugby union World Cup.

However, he will spend a lot of time out of the country. As well as pursuing television contracts for the World Cups, he will travel Europe with Carlo Croce, who is well connected in the business community, exploring the commercialisation of the sport.

Croce will effectively say, “This is Malcolm Page, he has won two Olympic gold medals and six world championships.” With an introduction like that, the intelligent and personable Page is sure to achieve some results in signing up new sponsors and partners.

Among his other tasks is working with the Olympic organisers in Rio de Janeiro and Tokyo to ensure sailing is presented well, and that facilities are fair and accessible.

Page says the negotiations over Rio are delicate, to say the least, as ISAF walks a thin line between ensuring the race course is fit to sail in the notoriously polluted Guanabara Bay while not upsetting either the IOC (who could drop the sport from the Olympic roster for 2024) and the organising committee whose efforts are needed to clean up the water quality.

The recent announcement of a third course out on the ocean, so the entire regatta can be sailed out of the bay if necessary, was a logical progression. “After the success of the Nothe (the superb viewing area at the 2012 Olympics) we want sailing to be visible from the shore. But the first priority is to deliver a fair competition for the sailors.

“By telling them now that its a possibility, they can gear their training around the idea so it's not a surprise if we have to run with it.”

Although Page is very excited about his new position, in my opinion it is ISAF which has got the better of the deal. They have signed on a man who is universally admired by the sailors and has the ability to relate to people at every level, right up to CEOs of major world corporations.

“There will be knockers,” he concedes. “I won't please everyone. But personally I've always thought that if I don't like something I should get my hands dirty – go and fix it.”

Aware that our publications had been critical of his employer, Page could have taken the easy way out and avoided us. Instead he chose to ask me what I thought was wrong and he has gone away to address the issues I raised.

A political organisation like ISAF, with such a diverse constituency, can never get everything right. But there are good signs and in this humble scribe's opinion they have appointed the very best man they could to change their image.

We will continue to report and comment on ISAF's failures. But it seems we will spend more time reporting on their success. ✵