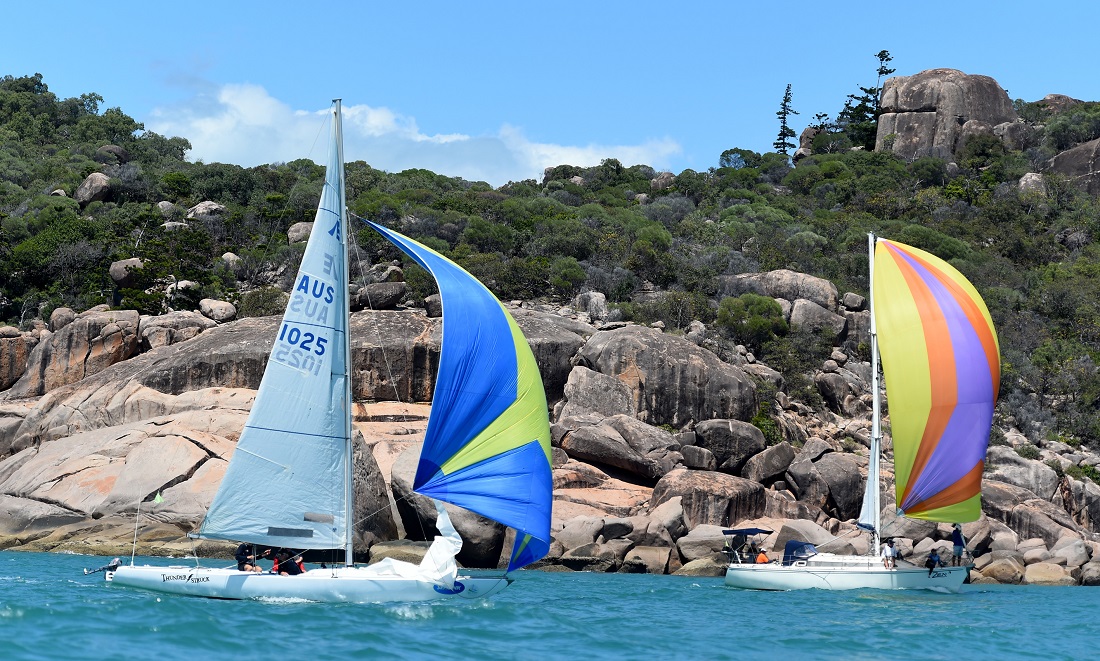 As the weather forecast earlier foretold, a lighter breeze, so ideal sailing was experienced by all at SeaLink Magnetic Island Race Week (SMIRW) on the variety of courses constructed by organisers at Townsville Yacht Club (TYC).

Ragamuffin III (Stuart Tivey and Lisa Sampson) scored their first win in Race 3 of SeaLink Spinnaker Division 1 from the Mark Vickers’  skippered Zoe. Tasmanian entry, Ian Johnston’s Zephyr Insurance MA, was third. There was a minute between each when the handicaps were applied.

These results translate to the Tivey/Sampson and their famous yacht leading the pointscore overall Winning is in the family this week, as their son, Fletcher, scored a divisional win yesterday.

All other divisions sailed one race on longer courses taking them close to some of the beautiful rock formations the Island is noted for.

In SeaLink Spinnaker Division 2, Ben Kingsberry’s Amaya II, a Farr 11.6, had the goods to win Race 3 from Tony and Selena Muller’s Brava. Yesterday’s winner, Lyndy Sawbridge, is on a roll, skippering Helena May to third.

“We just had a good race, perfect for the boat,” Kingsberry commented. “It was a much better sea state and 13-15 knots of wind. It suited us better than the last two days. We didn’t make any mistakes, which helps.”

Amaya did well to win, all things considered. “Most of the crew haven’t sailed the boat together before. This is our first our first season on the boat and our first proper regatta,” Kingsberry admitted.

And the competition: “We had a good match race up the side of the Island on a beam reach. We’re having a fantastic time here – it’s a lovely part of the world. And the organisers and their team are doing a great job.”

Small Hotel, owned by the Minogue brothers and their partners, cleaned up to claim honours in SeaLink Spinnaker Division 3. They had a five minute win over fellow TYC members, Owen Stanley’s Tap Dancer and Rod Finucane’s Fenina.

“Just our day today,” Peter said. “Beautiful conditions and we had good boat speed. The handicap looks after itself. We’d been losing by 30 odd minutes the last two days,” he said, explaining they had only bought the boat last November.

“We entered and didn’t start off too well. Our little boat, a Seaway 25, starts performing better in lighter conditions that we had today.

“We’re the fourth owners of the boat, and it’s always been called Small Hotel. My brother David and I, along with our partners, bought the boat and joined Townsville Yacht Club, where’ we’re now racing. My wife Jane races, with us, but David’s wife is a silent partner.”

David ‘Kylie’ Minogue responded: “Pete is a more accomplished sailor than me – he’s more technical – I come out to have fun. It was a good day out today – our day.”

In other news, Wayne Simonson’s Vaya Con Dios and James Finch’s Warrigal were involved in a collision, while Michael Phillips’ Poppy retired due to an injured crew, who was headed to hospital to be checked over.

Tonight is the Skippers and Sponsor’s night at Townsville Yacht Club via SeaLink ferry, which moors outside the TYC. Meanwhile, the crews will enjoy the crew party back Peppers Blue on Blue.

For full results and all information, please visit: www.magneticislandraceweek.com.au/