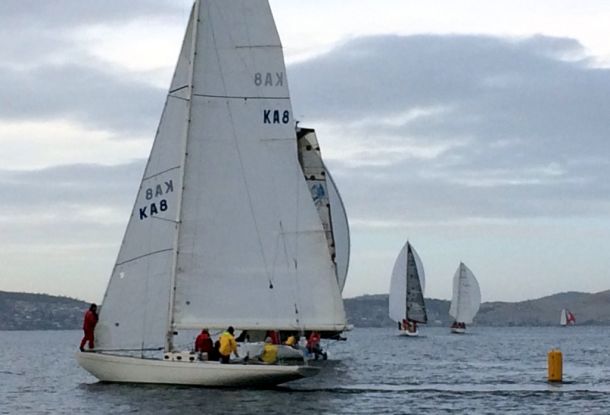 Patrick Copeland lodged a casual entry for his Magic 25 Rough Justice only last Friday, it first race on Hobart’s River Derwent. It proved a smart move, as the light 5-8 knot nor’westerly breeze proved ideal for the light displacement sports boat which managed to maintain boatspeed when other heavier boats came to a dead stop with no wind.

With light snow falling on Mount Wellington, the temperature still just 9º C in Hobart (probably 6º C on the water) the Winter Series continues to attract a good fleeete of hardy sailors out for a Sunday morning dash (or drift) around the buoys.

Rough Justice led around the first windward mark and continued to open up her break on the fleet, eventually crossing the finish line almost eight minutes ahead of the nearest boat, the Sydney 38 Ciao Baby II.

On corrected time in Division 2 Rough Justice’s margin was even greater, 10 minutes and 14 seconds ahead of Wildfire (Malcolm Robinson) with third place going to Ciao Baby II (Gary Cripps).

Iain Murray designed the 7.46m LOA sports boat for catamaran-builders, Hobie, as a new venture into monohulls. It excelled in the light breeze today, both upwind and downwind, where a large asymmetric spinnaker proved a winner.

After two races in the RYCT’s Winter Series Wildfire (Malcolm Robinson) and Young (Scott Brain & Steve Chau) are on 4 points each in Division 2 while in Division 3 Vistula (Gregory Biskup) holds a one point lead from Serenity (Graham Hall).