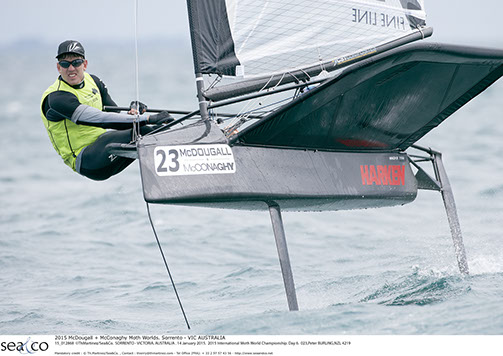 Peter Burling from New Zealand sailed his Mach 2 moth to a convincing victory in the McDougall + McConaghy 2015 Moth Worlds held in Sorrento last week. Pete took nine first places in the regatta which was divided into two fleets of  79 and 76 boats.

The Mach 2 moth designed by Andrew McDougall and built by McConaghy Boats has consistently proven to be the most successful hydrofoiling moth since first launched in 2008, with seven consecutive world titles and over 500 boats launched to date. The Mach 2 has become the choice for Olympic Gold medallists, America's Cup crews and weekend sailors looking to experience the thrill of foiling. Out of the 79 boats in the gold fleet 73 were Mach 2’s.

“There are some great guys in this record fleet, I am absolutely stoked to win,” said Burling. “All the time I have put in to this campaign paid off,” You get on a winning roll and just keep going. Nathan (Outteridge) and I spent a lot of time working on our boats and nothing broke.”

As co-creators of the Mach 2, McDougall and McConaghy have always been strong supporters of the Moth class. This years event, held by the Sorrento Sailing Couta Boat Club, is the second world championship to be sponsored by McDougall and McConaghy who also provided boat builders on site during the whole regatta to keep the fragile machines, akin more to model aeroplanes than sailing boats, on the water and sailing regardless of the punishment that was dished out in the extreme conditions.

Congratulations to Pete Burling, Nathan Outteridge, Josh McKnight, Andrew McDougall (13th in gold fleet and winner of the masters title) and all Mach 2 pilots who made the 2015 worlds the best yet.