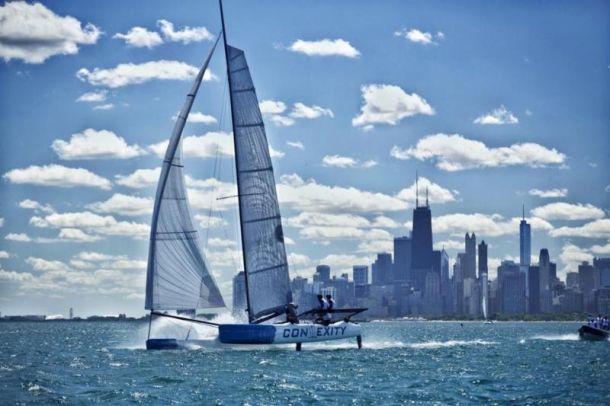 11/09/2015
Chicago, IL — Chicago Match Race Center will shift gears this weekend from the usual mono-hull match racing to catamaran fleet racing in slightly bigger and much faster boats, M32 catamarans. The first ever M32 regatta in Chicago will sail alongside the Chicago Regatta benefiting Bear Necessities Pediatric Cancer Foundation hosted by the Pinnacle Foundation. Both regattas will be based out of 31st Street Harbor, and the racing area will be just south of Navy Pier on Friday and outside 31st Street Harbor on Saturday and Sunday.
“With the announcement that the WMRT will be sailed in the M32's next year, there's a lot of energy in this class and we look forward to being a part of it as it develops. We are excited to bring the M32's to Lake Michigan on the same weekend the M32's are also racing in Stockholm,” said Tod Reynolds, CMRC Program Director.
Team Convexity, skippered by CMRC co-founder and local favorite Don Wilson, will have two of the regular match racing team crew members with him including tactician Keith Swinton (Perth, Australia) and Maggie Shea (Chicago, IL). Josh McCaffrey (Chicago, IL), who manages Wilson's fleets of boats, and Mike Rehe, (Detroit, MI) a former WMRT World Champion, will also be onboard. Wilson's match racing record this summer is impressive: he's made the semi-finals at all the CMRC regattas he has sailed and won two of them overall including the Grade 2 in June. With these strong finishes, Wilson is ranked 20th in the world and currently holds the highest US spot in the ISAF World Match Racing Rankings.
13FIFTY Racing was created by Jesse Fielding (Newport, RI) and William Gammell (East Greenwhich, RI), with the mission of competing on multiple platforms with a co-ed all-American crew. “13FIFTY” signifies the 13 stripes and 50 stars on the American flag and symbolizes the home-grown American talent they have onboard. Sally Barkow (Nashotah, WI), a two-time Olympian and Midwest sailing hero, who recently sailed around the world on the Volvo Ocean Race as Team's SCA strategist, will be calling tactics on the slightly smaller (but much faster) M32 this weekend. Sarah Lihan (Ft. Lauderdale, FL), a 2012 Olympian will be trimming gennaker. Chicago local Jack Jennings, who grew up sailing on the Great Lakes with his father and now competes internationally in the Star Class will be trimming mainsheet. Jesse Fielding will skipper this all-American team at CMRC for the first time.
Chris Steele (Auckland, NZL) will skipper 36 Below Racing, which he formed in 2011 with his eyes on the World Match Racing Tour and America's Cup. Since then, Steele's best match racing ranking was 7th in the world. Steele's regular match racing team will be onboard this week: previous CMRC interns Shane Diviney (Dublin, IRL) and Walker Banks (Newport Beach, CA), and catamaran veteran Harry Hull (Auckland, NZL). 36 Below Racing participated in CMRC's M32 Youth Academy Boot Camp last month as a tune-up for this regatta.
Steele explained “with the new direction of the WMRT toward multi-hulls, we're excited to get as much time as possible in the catamarans, especially now that it follows the America's Cup pathway once again. It's always great to sail at CMRC and we're grateful to compete in this debut M32 event.”
The Chicago Regatta benefiting the Bear Necessities Pediatric Cancer Foundation includes multiple races in various classes held over this weekend and next week. Saturday and Sunday will feature the Lakeshore Distance Race, the Landmark Cruising Rally, and many social events that also benefit the charity. Then the “Courageous 400 Race,” a 400-mile long distance race finishing in Milwaukee, will start September 17. Read more about the charity events and causes at www.chicagoregatta.com.
– Dobbs Davis