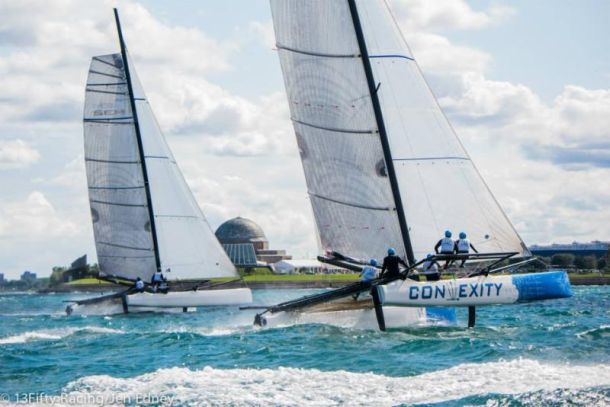 Chicago, IL – The M32's delivered close racing and a spectacular view as they ripped across Chicago Harbor at 15-25 knots for the first time. Dave Doucett of M32 North America praised Chicago as a “real eye-opener for the M32 class. With fantastic facilities and great racing right in front of the city, we look forward to scheduling many more events with the Chicago Match Race Center!”

36 Below Racing, skippered by Chris Steele with crew members Harry Hull, Shane Diviney and Walker Banks, took home the trophy for the first-ever M32 Series regatta in Chicago. Steele's young team, who were new to the M32's, handled the high-powered catamarans impressively well in very challenging conditions that ranged from wavy seas, with strong winds from the North to light and shifty breeze off the city front. Don Wilson's Team Convexity finished second and very close behind Steele with only a single race finish out of the top two. Jesse Fielding's 13FIFTY Racing from Newport, RI rounded out the fleet in third place.

Steele began the last day of racing merely one point ahead of Wilson, and both skippers had only 1st and 2nd places in their score lines. After Steele won the first race on Sunday and Wilson won the next, it quickly turned into a match race between the two boats. Steele admitted “Convexity was fast and well-sailed around the race track, so we had to put them behind us at the start.” Steele aggressively pinned Wilson out of the starting box during some of the pre-starts, and began some races with as much as a 15-20 second advantage.

After fourteen races, the fleet racing series concluded and Wilson and Steele decided to go head-to-head in an experimental match race. Wilson pushed Steele to the starting line and forced him on to the course side pre-maturely, which gave Wilson a 15-second lead around the first mark. Wilson held onto his lead all the way around the course and took home the match win.

CMRC's devoted and talented Race Committee team, led by Darcy Cook, Bill Canfield, Dick Schweers and Olof Andersson, adapted quickly to the America's Cup-style race course, which has twice as many marks, and boats sailing three times faster than the standard match race regatta. The Race Committee ran seven races on Friday, cancelled races on Saturday due to waterspouts and thunderstorms, and then managed to run 8 races on Sunday with a break to entertain guests onboard the M32's.

13FIFTY Racing entertains guests onboard during the racing lunch break on Sunday.

“This weekend was a great learning experience for us logistically. The shore side operations, race management, and umpiring is all new to our team. We raced out of Chicago's newest harbor at 31st street which is an impressive facility. I'm happy with how the event went, and it was a great step for CMRC and Chicago,” said Tod Reynolds, CMRC Program Director. “We can't wait to see what the next challenge will be!”