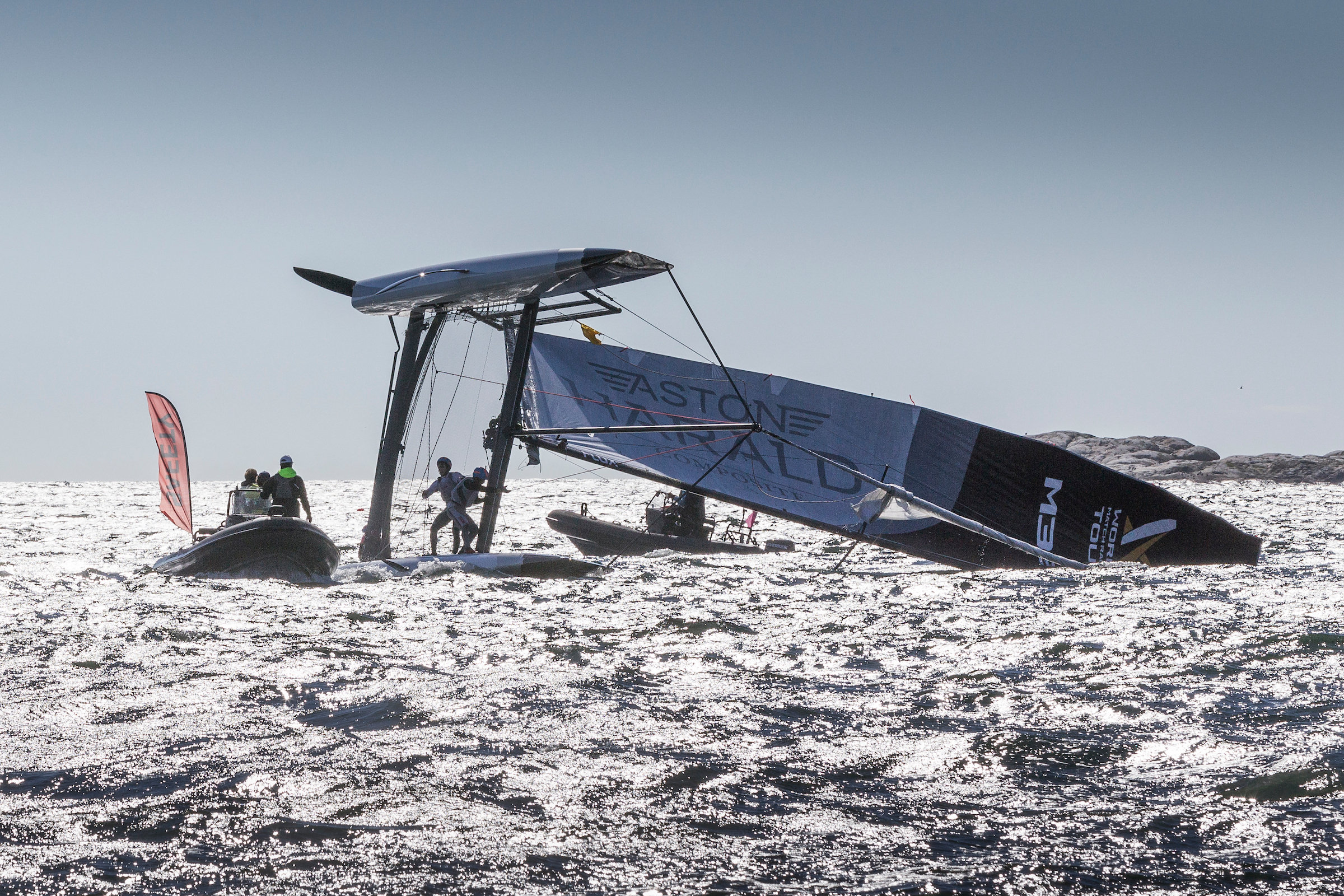 Perth, Australia (February 7th, 2017) – The M32 catamaran is at the forefront of the worldwide move towards “thrill seeker sailing”, in anything from 10 knots of breeze upwards they are fast and furious, and definitely more than a bit edgy. It is therefore with good reason that the builders and class organisers require those that sail on them on the World Match Racing Tour have a licence. This sets them apart from other high performance boats, and recognises that sailing can be a dangerous sport.

Cameron Seagreen, who was competing in the Swan River Match Cup last week with Matt Chew’s Sydney based team, has every reason to be thankful that this licencing is compulsory. While practising with his team last week, the boat capsized and trapped Cameron underwater with his leg entangled in the rigging.

Talking about the incident he said, “We were just doing our licencing, and getting into the racing aspects with some of the other teams, we were manoeuvring against Mans Holmberg, and we went into a gybe with everyone on the wrong side of the boat. The boat started to capsize, and I thought OK, the boat is going over but no problems.” On this occasion the boat continued to fully invert.

He managed to get a few deep breaths of air in before the trampoline between the hulls came down on top of him, holding him under the water. Initially he thought he could swim out with the other crew members, but found he was tangled and couldn’t get out.

“The next thought I had was go for my knife which was in my lifejacket and cut the trampoline to get out. I started trying to cut the tramp, and nothing was really happening, so I was starting to stress.

“I remember seeing all the other guys starting to climb up onto the tramp, then Sean O’Rourke started cutting a hole for me. I felt for the hole and found it, but it wasn’t quite big enough for me to get through, at this stage I was fully panicking, then Matt Chew pulled me out by the helmet through another hole that he’d cut.”

Cameron says he isn’t sure how long he was under the trampoline, but the adrenalin was definitely pumping.

In the safety training they had specifically been taught about doing a head count after a capsize and if there is someone missing, finding where they are as quickly as possible. Clearly their training worked because there was no hesitation on the part of his crew mates in cutting an escape hole for him.

Everyone on the boats carries a knife, and although the trampoline is made of Dynema, a good knife will get through it. “You definitely have to have a good knife, that was highlighted for me, not being able to cut through it myself,” said Cameron.

Wearing a lifejacket, a crash helmet and carrying a knife are all compulsory elements on the M32, but as Cameron found out the lifejacket prevented him from swimming down to untangle himself from the ropes around this legs. Once there was a hole, he could get his head through to get some air and then untangle himself and climb out fully.

Although the emphasis in the safety training is about capsizing, Cameron says there was a lot of other simple stuff about the boat, “like the racks folding in, and where the knifes are stored on the boat, so if something does happen, if you can’t get to yours, you can get to one of those knives.”

For Cameron this is his fourth event, so he has good experience of sailing the boats and says they don’t capsize that easily but there are some tripping points that just put them over the edge.

For more information on the M32 Academy and to book a place at one of our clinics please visit m32world.com/m32-academy