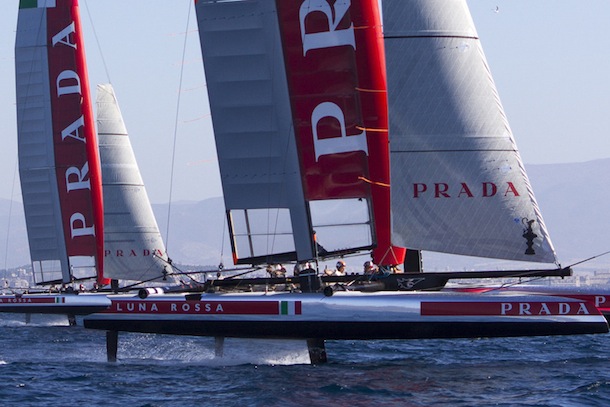 Luna Rossa has followed through with its threat to pull out of the 35th America's Cup after the chellengers voted by a majority to drop the AC62 in favour of a smaller class for the 2017 event. The Italians issued this statement:

The result of the vote proposed by the Event Authority with the agreement of the Defender of the 35th America’s Cup has overturned, with a majority vote, the America’s Cup Class Rule for the boat with which this edition will be held; this happened notwithstanding the fact that such rule had been previously adopted unanimously by the teams and was in force since June 2014.

Following a careful evaluation of the serious implications of this unprecedented initiative, Team Luna Rossa confirms that it will withdraw from the 35th America’s Cup.

Their close friend on the challenger side, Emirates Team New Zealand, has predictably supported the Italians actions:

Emirates Team New Zealand are deeply saddened by the news of the withdrawal from the America’s Cup of Luna Rossa, one of the most established, respected and admired brands in the history of the event.

Team CEO Grant Dalton today said, “We are quite frankly in disbelief that the continued actions of the America’s Cup Event Authority have lead to the withdrawal of our great friends Luna Rossa. It sends a clear and unmistakable message that the self-serving manoeuvring of rules within sports oldest trophy has consequences for not only the America’s Cup but also all of sailing. “

Emirates Team New Zealand have filed its case on the illegal withdrawal of Auckland as the qualifier regatta venue with the America’s Cup Arbitration Panel and will be making no further comment at this time.

The America's Cup Event Authority responded with this statement:

The America’s Cup is disappointed to learn that Luna Rossa intends to withdraw its challenge for the 2017 America’s Cup. While we have not yet received a formal notice of withdrawal, we take the team’s media statement that they are leaving the America’s Cup as real.

“I know all are disappointed with this decision taken by Luna Rossa, especially based upon their significant history in the America’s Cup,” said Commercial Commissioner Harvey Schiller. “Since we started the Competitor Forum, I’ve worked closely with skipper Max Sirena on many issues facing the America’s Cup and our teams. We offered a range of solutions for reducing costs by introducing a new America’s Cup Class. Unfortunately Luna Rossa wasn’t prepared to accept the majority decision, as written in accordance with the rules of the event.

“It’s difficult to understand this withdrawal when our shared purpose has been to control expenses, encourage additional entries and build a better future for the Cup. It’s even more puzzling as it was Luna Rossa who insisted on the switch to majority rule on these issues.

“But looking at the bigger picture, the America’s Cup is now more accessible for new teams and with a new generation of people like Ben Ainslie, Nathan Outteridge, Jimmy Spithill, Franck Cammas and Pete Burling we have a strong foundation for a very competitive event.”

This was followed by a statement from the teams who support the change:

We are disappointed to see how Team New Zealand are characterizing the rule changes that reflect the collective will of the America’s Cup teams. During discussions last month, ALL six teams, including Team new Zealand, agreed on the need to change to a smaller boat to reduce costs. While Luna Rossa supported a less dramatic change, a majority of teams agreed on what has become the America’s Cup Class, a new rule written in consultation with ALL teams, with drafts of the rule sent to ALL teams for comment and feedback.

Each team that voted for this new America's Cup Class made compromises and sacrifices to get this done for the betterment of the America’s Cup. Taking these important decisions by a majority vote is something that was insisted upon by Luna Rossa and written into the rules of the event. Regrettably, abiding by the results of the majority vote appears to be something neither they, nor Team New Zealand, are willing to do… unless they are part of the majority.

We hope that Team New Zealand can see a way forward, as we all have, and look forward to racing them in the America's Cup World Series later this year.

There is no doubt that the event will miss the style and passion of the Italian syndicate. But while some would argue that their paranoid hatred of Sir Russell Coutts and Oracle Team USA was justified and held the Defender to account, it is likely that good decisions will pass more smoothly without Max Sirena questioning the rationale behind them at every turn.

Sirena's personal attacks on ACEA Race Director Iain Murray over his safety recommendations, following the tragic death of Andrew Simpson in the Artemis crash, were totally out of order, in my opinion.

Spare a thought, also, for the Luna Rossa team members who have been working towards the 2017 goal. Like the sailors who missed the 1980 Moscow Olympics because of a political boycott, the crew and design team are now out of a job owing to a political decision beyond their control.