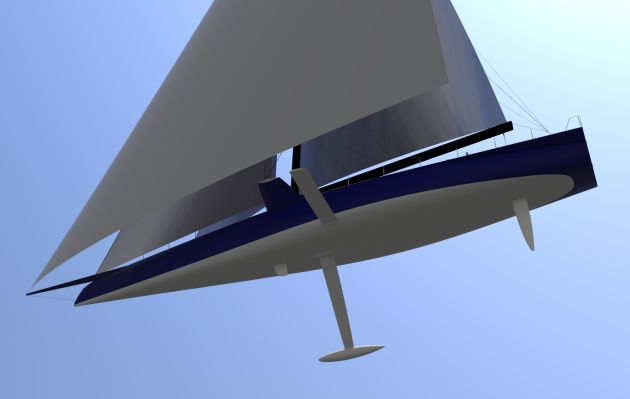 Artists impression of the new 100 footer.

Tauranga, New Zealand: 7 November 2016: Ludde Ingvall unveiled major modifications to his former 90 foot yacht when it emerged from the boatbuilder’s shed in Tauranga, New Zealand today. The work has been undertaken with backing from Sir Michael Hintze.

Ingvall, a former round the world yachtsman, world champion and record holder, has taken over a year to transform the yacht, from a fairly conventional 90 footer to a striking 100 foot super maxi. Ingvall is a two-time line honours winner of the Rolex Sydney Hobart race, first in 2000 and again in 2004. The yacht has now been re-modelled and re-named CQS after its principal sponsor.

Working with a top technical team including yacht designers, engineers, yacht builders, rig designers and sail makers, they have produced a boat that pushes the boundaries of design technology. The distinctive new hull shape features a reverse bow, an outsized bowsprit, ‘wings’ to spread the shroud base supporting the mast and a wide platform across the cockpit area.

Speaking as the hull emerged from its construction tent, Ludde commented, “This is the start of a very exciting adventure. Computer modelling suggests the yacht has the potential to produce some impressive speeds, given the right conditions, but we will only know how she performs when she is in the water and as the race programme unfolds.”

Going on to praise the team that had worked on the project, he added, “Everyone has put in a fantastic effort and worked exceptionally long hours to get us to this stage. I am really grateful for all their work and skill in creating this innovative boat.”

Sir Michael added, “This is a quest for innovation and performance. We would not be launching without the knowledge and experience of my cousin Ludde. It is a true team effort which I’m excited to be a part of.  We have a strong team of designers, boat builders and sail makers and this gives us confidence, but we are mindful that the ocean will be our ultimate judge.”

Amongst the innovative features of this re-modelled yacht is a ‘Dynamic Stability System’ (DSS), comprising an underwater wing, which augments the righting forces of the keel, believed to be one of the largest and most technically advanced of its kind ever used.

Over the next few days a brand new high spec keel will be fitted, and the rig installed, before undergoing sea trials. A programme of international races has still to be confirmed, but the first competitive outing is expected to be the Round White Island Race starting from Auckland on 25th November.