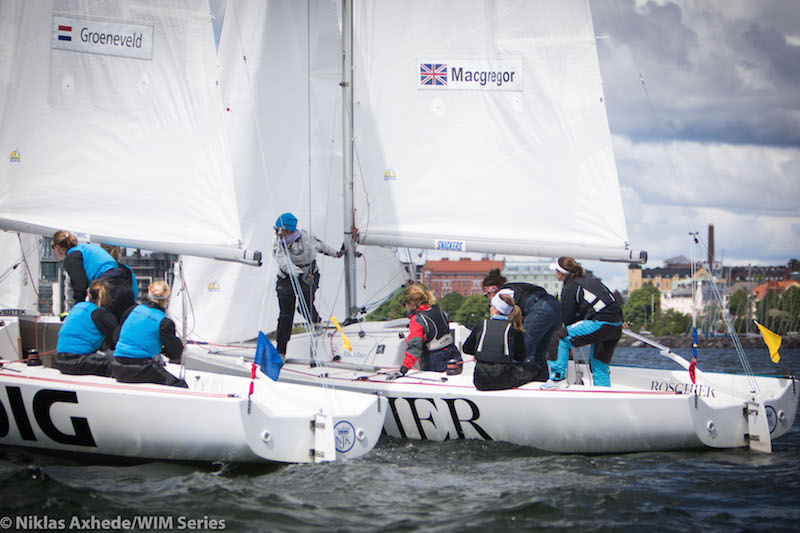 Groeneveld (NED) and Macgregor (GBR) dialing up in a pre-start in the Finals. Photo: Niklas Axhede/WIM Series Media/

This is Lucy Macgregor’s second Women’s Match Racing World Championship title. She won her previous title in Newport, Rhode Island, USA in 2010 but did not seem to miss a beat. “A new team for me this year. And they were all absolutely brilliant. I can’t possibly speak more highly enough of every single person on board. They did their job and ten times more all week. The crew really saved me. Fantastic effort by them,” praised Macgregor of her crew.

The score line may seem on the surface that Team Mac was not challenged, but the battles on the water told a different story. Lots of close matches and thrilling exchanges.  “Today I was able to go on the water for one of the most fantastic matches of the Championship between Team Mac and Team Anna in the Semi-Finals. Tough battles, lead changes – it was so close that you really had no idea who was going to win until the last gybe. And it was so much fun to watch,” surmised Liz Baylis, WIM Series Manager.

The Final matches between Team Mac and the Dutch Match Racing Team were more hard fought battles. When asked what were the keys for winning those matches, both skippers agreed: starts and playing the wind shifts. After dawning with a brisk clear sky the weather quickly changed to big clouds accompanied by huge wind shifts.
“Keeping our heads out of the boats and playing the shifts made all of the difference,” answered Groeneveld when asked about the key to her win over Macgregor in the third match of the Finals.

Macgregor spoke about Groeneveld and her team: “She (Groeneveld) is a brilliant sailor, as are her team. You have multiple medallists there – a really fantastic team.”
As the boats approached the finish of the fourth and deciding match of the Finals, the race committee was scrambling to get all of the assets off of the water as a tremendous thunderstorm was approaching the area. Everyone was safely ashore just as the clouds opened and dumped rain across the venue.

After the brief yet violent showers, the Closing Ceremonies in Hernesaaren Ranta were a festive event with everything from a heartfelt thank you from World Sailing Vice President Ana Sanchez to the prize giving to dancing on stage to the live band.

The following awards were presented:

The first-placed skipper following the round robin was presented with the ISAF / World Sailing Nucci Novi Ceppellini Memorial Trophy. The trophy is named after Nucci Novi Ceppellini, ISAF Vice-President from 1998-2008, who passed away in February 2008 after many years dedicated to the sport, with women's match racing one of her particular passions.