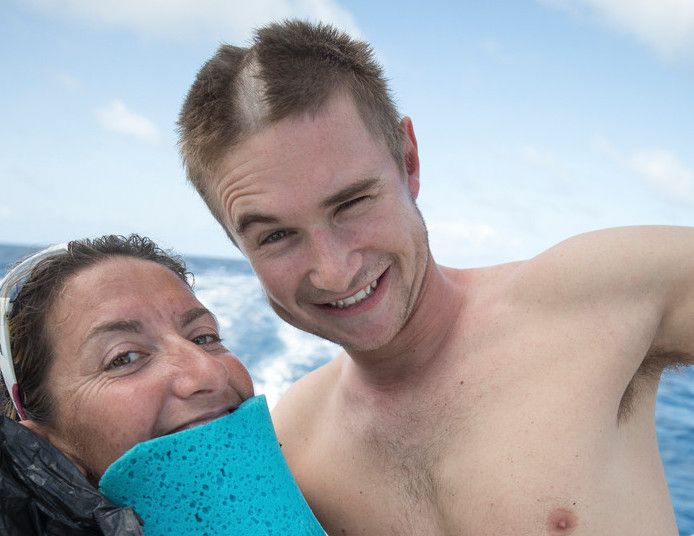 With the reverse mohawk I’m sporting, you might be forgiven for thinking I’m struggling to adapt to life on this carbon box. That’s not the case, well not yet anyway, it’s still early days.

All credit for my new hairstyle has to go to King Neptune, who paid us a visit during the Equator crossing. If you aren’t familiar with this, it’s a long-standing maritime tradition that sees those of us crossing from one hemisphere to another for the first time (otherwise known as Pollywogs), face the judgment of King Neptune (God of the seas) for the crimes we’ve committed during the voyage.

For these supposed crimes, we are duly punished. And who proxy’s for Neptune to put the spotlight on our transgressions and mete out the punishment. The Skipper of course, and didn’t Dee have fun dealing with her six pollywogs. So what you see is my punishment and if I say so myself, based on the not so bad reverse Mohawk, I mustn’t have committed too many reprehensible crimes. You might think different!

It’s kind of nice to have entered back into the southern hemisphere. It’s been over six months now and it feels good to be getting back into our half of the planet. We escaped the infamous Doldrums pretty unscathed… just a few big clouds.

It’s the erratic area surrounding the equator that is in-between the north and south trade winds (the winds that mariners generally rely on). The Doldrums are the place where the unexpected can happen. You can sit dormant for days on end. Normally speaking it’s a mixed bag and can be as flat as. We were happy to get through as easily as we did.

A bad crossing could well have lost the leg for any one of the fleet. With that said, it wasn’t all easy. An example of the unpredictability of the area happened when I was fast asleep and woken up by screaming coming from the deck. A big cloud with over 35kts of wind and rain had suddenly hit and swallowed us up. We all scrambled to get the yacht under control and heading in the right direction and once again I was drenching wet!

The past few days we’ve been cruising along in the trade winds heading south. We had the best sched yet on Nov 15, making gains on team Sun Hung Kai/Scallywag and being the fastest boat over a 6-hour period. It feels great to be in the fight. On board we are even more energized than previous days and we’re all very focused.

All is well, but after 10 days it is beginning to feel a little repetitive! The same thing every four hours…well except that sleep isn’t so regular. While it’s repetitive, the routine is what keeps you focused.

Right now, we are hoping for the weather gods to be on our side in the coming days, as we’ve rolled the dice and decided to go a little further east than some of the other boats. We aren’t alone in this decision, team AkzoNobel and team Sun Hung Kai/Scallywag have made similar tactical decisions.

There’s no way of knowing how this will play out, but the tension will grow as we get closer to Cape Town. We could be in a three-way contest for the lead or a battle to avoid being last. Now back to my bunk for some shuteye.