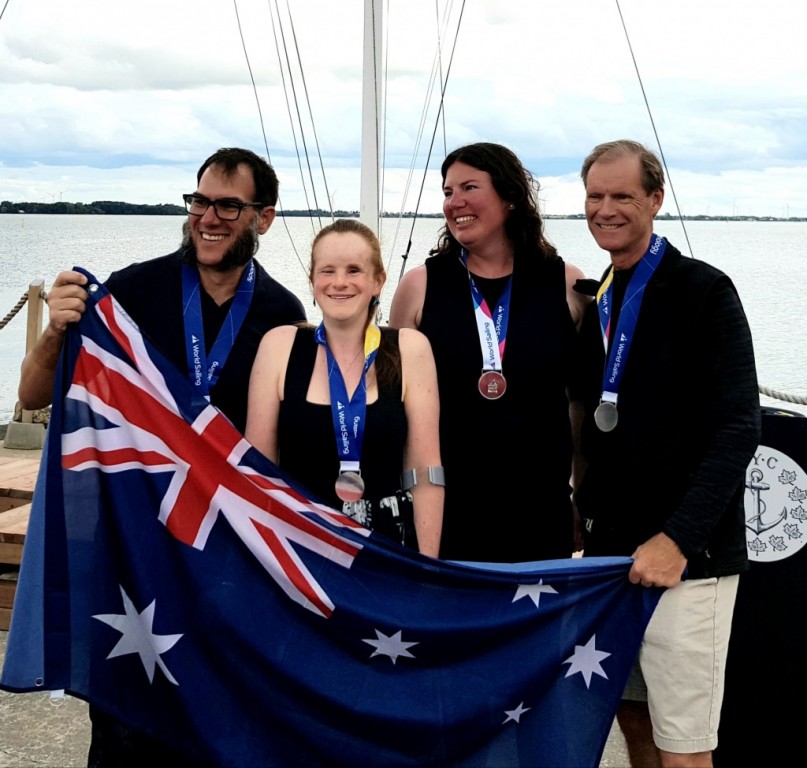 Kylie Forth (second from left) and her Australian Blind Sailing crew.

Sailing is difficult and challenging at times. But how would you go doing it blind?

Teams consist of two blind and two sighted sailors. There are three fleets according to the sight classification of the blind sailors. As Kylie and Erin are totally blind, they race in B1, where there were seven teams (two USA, two Great Britain, France, Canada, Australia). The other divisions are B2 (some useful vision), and B3 (the most sighted). There were three teams in B2 and four in B3.

Skipper Kylie took a bit of time to understand the slower responding helm due to the narrower rudder. Using the feel of the wind on their faces, angle of the hull and the gurgling sound of the water rippling down the side, the totally blind skipper and main sheet trimmer, Erin McGlew, improved immensely over the course of the regatta.

They were aided by sighted Todd Back on jib trim and 2016 Paralympian Gold medallist Colin Harrison as tactician. If being a blind skipper is not impressive enough, Kylie is also an above-knee amputee, which restricts her ability to hike and move quickly during manoeuvres, and Colin is a shoulder amputee.

“The Sharks had a much narrower rudder than the Sonars and S80s that I have trained on, so I had to rely a bit more on Todd and Colin to tell me if we were turning, or if I had to alter course. I improved over the course of the regatta so by the end I wasn’t needing as much feedback from them. We had one introductory session in the Shark, then a 30-minute practice race, then we started racing in earnest,” Kylie said.

“Working with a new team always brings new perspectives. We were definitely still refining our communication because we had so few training sessions. Colin joined the team at the end of June, and Todd started mid-May. Colin and I definitely learnt to trust each other more the more we raced, but this also came from clearer communication as we learnt what worked and what didn’t. I definitely think this team has great potential, especially as we were able to climb from fifth to second throughout the regatta only having had five or six good training sessions beforehand. I can only imagine how well we will do with a year or more of training together.

“In stronger breeze I have better feel and really good control. In lighter air I don’t get as much feedback from the boat and have to focus on the wind direction and the sound of the water to indicate whether we are moving or have slowed down.

“I was the only multi-disability sailor in the event. As an amputee, I cannot hike out on the side of the boat while steering because it is too unstable, and I can’t move quickly enough in a quick tack or jibe. So, I can’t use my weight on the rail in strong winds. Otherwise, I don’t think it makes much of a difference. Indeed, in the Sharks, the mainsheet cleat faced backwards into my helming position, so I only had one knee to crunch on the mounting and only one foot to get tangled in the mainsheet,” Kylie continued.

“Erin is also totally blind. She feels the tension of the mainsheet and the angle of the hull to help her know how to adjust the sail, as well as listening for any fluttering in the sail to indicate that it needs to be brought in. Colin is a shoulder amputee.”

“The best moment was realising we had moved into second place from fourth on the third day. We had our first two wins that day in gloriously windy and wavy conditions, which is my favourite kind of sailing,” Kylie recalls. “The worst is there were a few collisions and not knowing when or how hard it will be and having the nerve to keep sailing whilst relying on the sighted crew for feedback.

“We are great friends with the Great Britain ‘B1’ Skipper Vicki Sheen, but have been trying to beat her since 2011. My team came second to Vicki in the Worlds in Japan in 2013, with an unassailable margin. This year we managed to move into second place in front of her on day 3, and we managed to stay there. By the end though she had gotten to within 0.8 of a point behind us!

“The USA skipper Duane Farrar won the last two World Championships and we thought we would not get anywhere near him, but throughout the regatta we steadily closed the gap to just one point on the second last day of racing. Unfortunately, there were no races on the last day because the wind would not settle, so we didn’t get that last chance to beat Duane as well. But the conditions were so variable that it would have been sheer luck for anyone to win, and it would have been a shame to win or lose just because the wind shifted to favour one or other of us.”

Being recognised is a desire most people have in life and Kylie Forth has been voted onto the Blind Sailing International (BSI) Executive Committee as the regional representative for Oceania. “I also recently made contact with some blind sailors in NSW, so I’m looking forward to expanding the blind sailing program in Australia. It would be fantastic to take several Australian teams to the next championships. The next regatta will be the Blind Match-Racing Worlds in either 2020 or 2021, and I will need to put together a team and train for that. Not to mention consolidating this team and training together with a full campaign for the next fleet racing worlds, scheduled for the year after the match-racing.

“We had incredible onshore support from Caron Jander, who did everything from massaging sore muscles to finding a good spot for our mascot Boomer to sit at dinner. Thanks to everyone who showed their support with messages of encouragement throughout the week. It gave us a real boost to have you all behind us.

“Huge thank you goes to Power Torque, Sailability WA, Royal Perth Yacht Club and the WA S80 Association who lent us a training boat and arranged for a small fleet to come out each week to train with us so we could practice in a fleet-racing environment.”

Congratulations to the team on their accomplishments. Full results at kingstonyachtclub.com/blindsailingworlds2019.