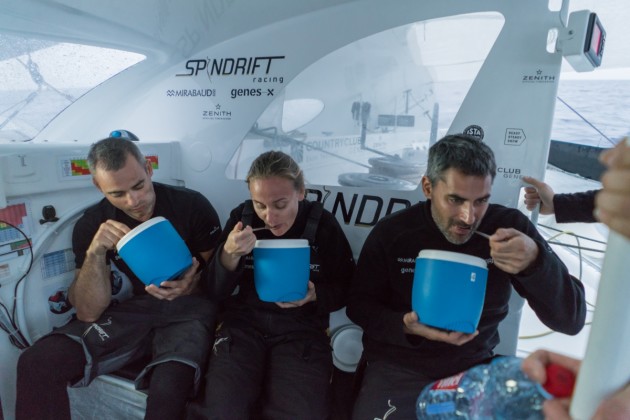 The support crew for the Jules Verne attempt by Spindrift 2 received the following message from Dona Bertarelli, illustrating one of the lesser-known irritations of a high-speed race around the world:
“Don’t ask me what time it is. I’ve got no idea. I don’t even know whether it’s morning, afternoon or evening.
“On board we use UTC, also known as GMT. Does that help? Not really: it makes it all the more confusing!
“Just to give you an idea, daybreak is at 6.30pm, and nightfall at 1pm. But it gets worse. Lunch is at four o’clock in the morning, and our evening meal is at midday! That should give you an idea of the chaos, but there’s more: all these times shift by an an hour and a half every day.
“So I just eat when I’m told to eat, without asking too many questions, but when I woke up this morning I didn’t really enjoy having paella for breakfast.
“Things will get even more complicated over the next two days, when we’ll go through the same day twice. Just after New Zealand we’ll cross the International Date Line, so one minute it will be midnight on December 15th, and the next it will be midnight on December 14th. It’s crazy, but that’s how Phileas Fogg, thinking he’d lost his bet, discovered that actually he had successfully travelled around the world in 80 days.!”

Spindrift 2 is now on the return journey having crossed at midday on Monday the 180-degree meridian or the antemeridian, which is literally on the other side of the world. The conditions that lie ahead for the trimaran are not straightforward: light and unstable winds due to a system at 60° South that is moving up to the North East. Whilst Spindrift 2 is sailing on a slightly northerly course, to avoid the ice on the shorter southerly route, a lot can yet happen. There are some complicated choices to be made and tense moments ahead for the Pacific crossing.