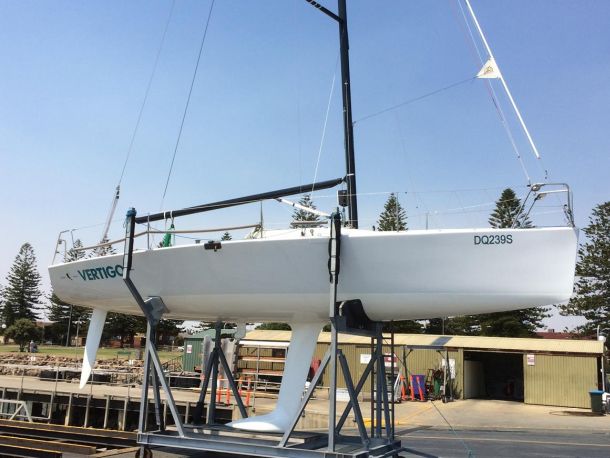 The 200th Festival of Sails entrant is a first time visitor from South Australia looking for an adventure and a challenge against an unknown fleet.

Jamie Goode’s Farr 30 called Vertigo will be trailered from Adelaide to Melbourne this month, then raced down to the coastal port of Geelong for the annual regatta steeped in maritime history.

“A fleet of 200 so far… the numbers sound great and I’m honoured to be the 200th,” said Goode upon hearing the news of his milestone entry.

Before Christmas, regatta Chairman Paul Smart said the fleet was 15% up on the same time last year, an encouraging fact as organiser the Royal Geelong Yacht Club and its event partners now aim for the 300 boat mark.

Last year the fleet for the annual Australia Day weekend sailing and family shoreside festival peaked at 317 individual yacht entries.
Goode bought Vertigo three years ago and says it’s now time to step up and compete against interstate boats. “There’s not many in the bigger boat fleet in South Australia, we felt it was time to challenge ourselves. We’ve have had some reasonable successes here in Adelaide but we are unproven outside our home state. I’ve been to a few nationals in other classes and I know the level will be pretty high. If we can finish mid-fleet that would be fantastic, anything above that will be a bonus.

“I’ve talked to other members from the CYCSA and they said we must go!” added the excited skipper.

From January 17 to 26, 2015, boats of all ages and sizes from multiple Port Phillip and other Victorian yacht clubs will join those trailered and delivered by ocean from Queensland and New South Wales. Tasmanian starters and those in Hobart after the recent Sydney to Hobart race have Bass Strait between them and Geelong. Rob Hanna’s TP52 Shogun has headed north for the Club Marine Pittwater to Coffs race, and is then doubling back to Hanna’s hometown for the regatta he always tries to support.

The seven-race 2015 Multihull Australian Championships commence Saturday January 17 and end on Friday January 23 with the traditional Festival of Sails’ launch, the mass start of the 34 nautical mile Melbourne to Geelong passage race for all divisions other than Sports Boats. They start their series on Corio Bay on Thursday 22nd.

“Spectators can get a great view of the fleet making their way across the bay from the point at Williamstown, the boats sail virtually sail right past it,” said Smart. After conducting a straw poll, RGYC is running a shorter passage race to cater for the increasing number of cruising boats.

Logistically hosting the International 14 World Championship followed by the Australian Multihull Championship and then the Festival of Sails is going to test the club’s resources.

“We could still use more volunteers and encourage people to register via the volunteer section of the Festival of Sails website,” Smart added.

Competitors can expect sponsor treats from Hardy’s Wines and Rex Gorell Land Rover and sailors’ family and friends and the general public taking advantage of the holiday weekend can look forward to the always fantastic free entertainment across multiple entertainment districts.

The next cut off for Festival of Sails entry is midnight on Friday January 9, 2015. Late entries will incur a $100 late fee and may be accepted up until midnight on January 16.