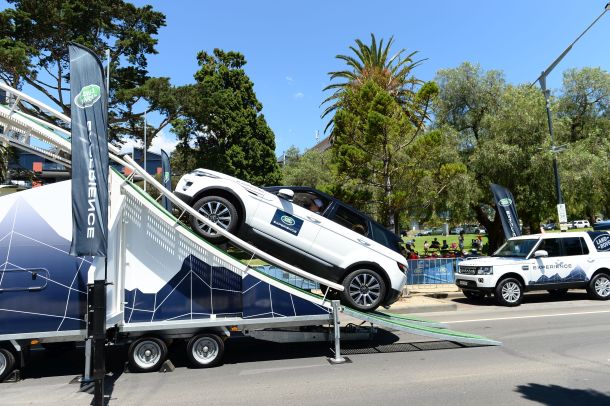 The Land Rover Terrapod display at the Festival of Sails.

“We are excited to year-on-year improve both the relationship we have with the Royal Geelong Yacht Club and the support we provide to the Festival of Sails in general.

The connection between the Land Rover brand and sailing is significant with Land Rover Australia supporting many key regattas around the country.

“The Festival is a great package of onshore and offshore activities and racing, and this in turn is a great fit for our brand which is all about adventure and shared experiences,” says Director of Marketing at Land Rover Australia, Kevin Nicholls. “The boats, like Land Rover vehicles, have design and technological innovation at their core, and both can take on the unique challenges of their surroundings to deliver outstanding performance.”

“The Gorell family have a long relationship with the yacht club and the community and this partnership is a wonderful opportunity to build on those relationships across the next three years.”

As the presenting partner for the Festival of Sails, Rex Gorell Land Rover will once again have a major display of their vehicles at the Geelong waterfront across the regatta.

A highlight for the 2016 Festival of Sails will be the return of the exciting and interactive Terrapod display, which captivated crowds at this year’s event. The Terrapod Driving Experience is an extreme driving course built off the back of semi-trailers. It simulates four wheel driving at its thrilling best.

The 2016 Festival of Sails Regatta will run from January 22 -26 with the passage race from Melbourne to Geelong held on the Saturday of the Australia Day long weekend. This is the first time in many years the Passage Race has been run on a Saturday and will be a thrilling spectacle for crowds attending the shoreside festival which is organised by the Royal Geelong Yacht Club.

The Victorian Government is a proud supporter of the 2016 Festival of Sails, which is the largest annual keel boat regatta in the Southern Hemisphere.