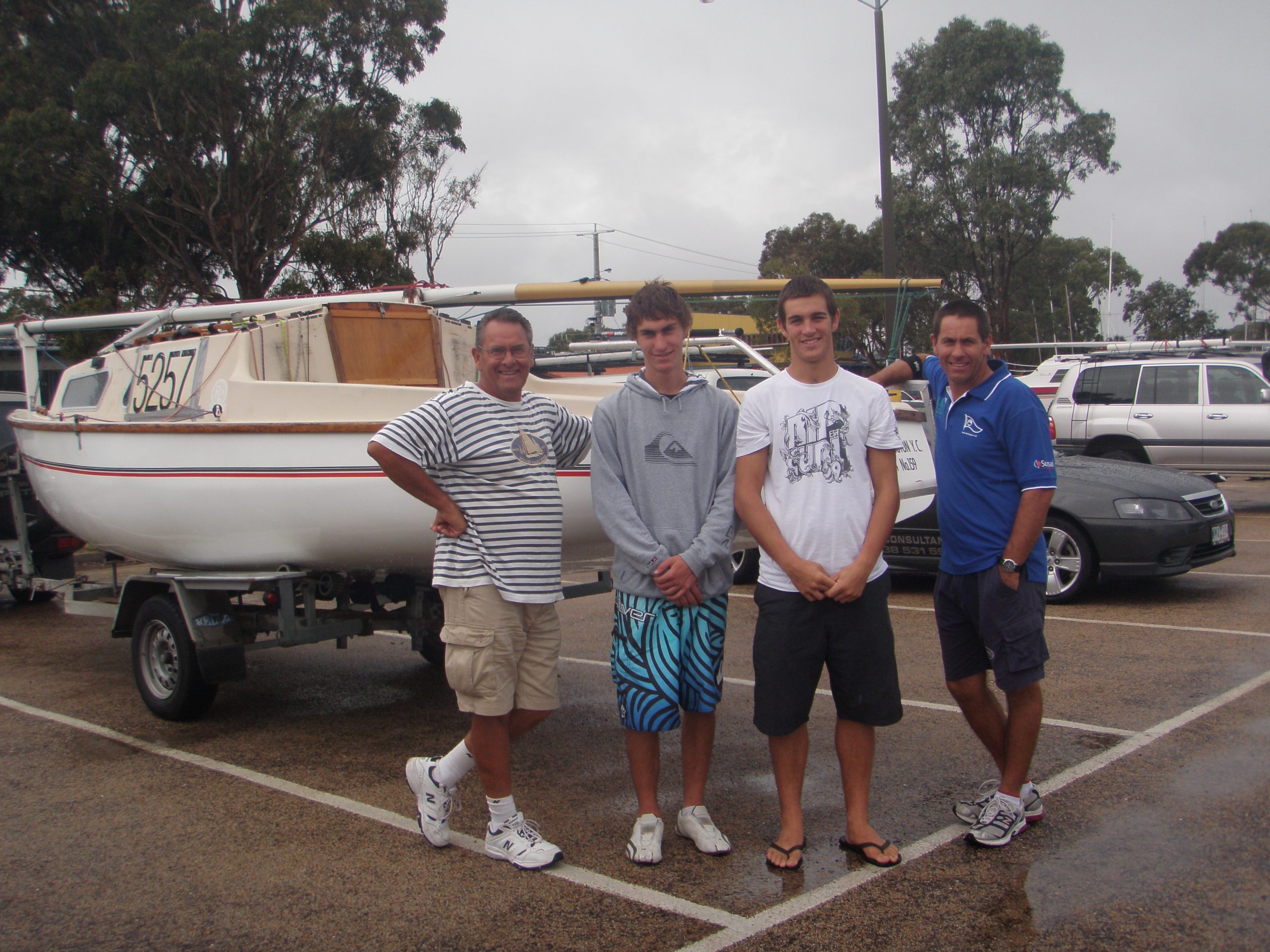 The Marlay Point Overnight Race is a Dyer family ritual, with Glenn Dyer competing in the very first race in 1968 and at least one member of the family has been involved in the iconic race every year since.

In February 1972 Glenn launched Banyandah, a Waratah 21 twin bilge keel boat he built himself. Two weeks after launching, Banyandah raced in the Marlay Point and Glenn’s eight-year-old son Darryn was onboard.

Darryn remembers the adventure of sailing at night with his dad Glenn, uncle Bruce and grandfather Ken as an eight-year-old kid, the first time he was allowed to stay up for the entire night.

The crew were still finding their feet on the two-week-old boat. Before the race even started, the calamity had already started. A stiff westerly met them as they left McLennan Straits to cross Lake Wellington. This was the strongest breeze the boat had faced, and the crew were keeping a close eye on how she handled it.

“I was all good down in the cabin eating sandwiches when I called out to dad ‘the floor boards are floating down here’.” Darryn remembers. “Pa (my grandfather) came down and found the leak was coming from a cockpit locker drain hole that was drilled to let rain water out of the locker. Due to the heal we had at the time it was letting lake water back into the boat.”

“We plugged the hole and began mopping up the bilge with sponges and buckets. After about five minutes, (I was still eating sandwiches and sponging) Pa made a funny noise. I soon worked out there was a bit more than just water going into the bucket. Having his head bent over the bucket was a bit more than Pa could handle in the rough conditions, and with a sandwich still in hand I called out to dad 'he’s throwing up in here.’”

By the time they got to the start line, they had dried the bilge out and were race-ready.

Like most sailors competing in the Marlay Point, Darryn agrees that McLennan Straits seems to be where most of the memories are made. “One year we were in the Straits with no wind. We were overtaking another boat quite smartly when he said ‘how can you be going that fast when there’s no wind’ Someone from our boat spilt the beans ‘we are on anchor mate’. The next thing we heard was splash as their anchor went in.”

The Dyers cruised the Gippsland Lakes on Banyandah until 1984, with the Marlay Point Race her only foray into racing each year and often the three generations of Dyers were on the boat.

In 1985 Glenn bought a Noelex 25, Chariot of Fire. The Dyers continued their family tradition of racing the Marlay Point together, with Glenn clocking 21 races before he finally missed one and that was to be a race official.

Since his first race at age eight, Darryn has been involved for 45 years, as either a competitor or part of the organising committee. He missed a race in the early 80’s to compete in the NACRA 5.2 state championships and two in the early 2000’s due to work commitments, but his wife and kids were there to help out on race day. He has raced on a variety of trailer sailers, including Noelex 25, Farr 740 sport, Inglis 27 and RL24’s, including his own RL Whatever.

In 2004 his kids, Rebecca and Mitch became the fourth generation of Dyers to compete in the race. While Darryn has been heavily involved in organising the race for the last 10 years, Mitch has taken to skippering Whatever with his some of his mates onboard.

This year on March 10, the Marlay Point Overnight Race will hold its 50th anniversary race. To date, over 120 boats have already entered and Darryn is hoping he will be right there amongst the fleet. He plans on getting the whole family on the water to compete in the milestone race and celebrate the Dyer family tradition.

For more information about the 50th anniversary of the Marlay Point Overnight Race, including entry forms, visit www.mponr.com