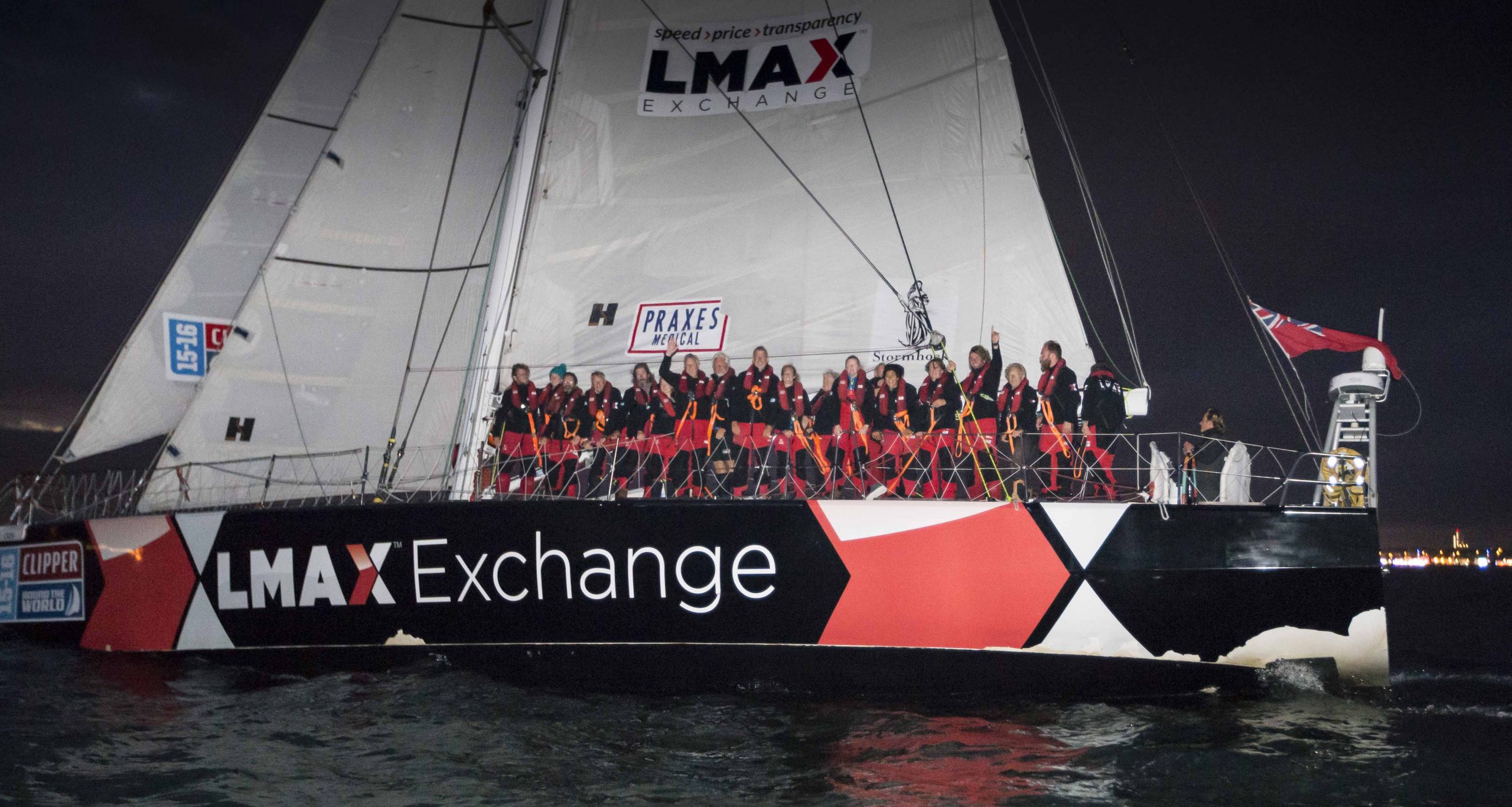 LMAX Exchange, Skippered by Frenchman Olivier Cardin, was confirmed last night as winner of the tenth edition of the world’s longest ocean race, the Clipper 2015-16 Round the World Yacht Race.

The team’s victory comes despite finishing the final race of the 14-stage series behind long standing rival for the title Derry~Londonderry~Doire, which was first across the Race 14 finish line, but not by a large enough margin to knock LMAX Exchange off the top of the overall leaderboard.

LMAX Exchange was only six points ahead of Derry~Londonderry~Doire going into Race 14, the 198NM sprint finale from The Netherlands, meaning everything was left to play for with twelve points up for grabs.

Despite Derry~Londonderry~Doire taking line honours at 2014:39 UTC last night off Southend Pier, UK, its fourth race win of the series, the team only clawed back two of the six points needed as LMAX Exchange finished just behind in third.

The Northern Irish entry beat Visit Seattle by 29 seconds as it finished in second at 2015:08 UTC, while LMAX Exchange crossed the line at 2038:30 UTC.

“Going into Race 14, we had a six point advantage over Derry~Londonderry~Doire and a short 24 hour-long race to complete. The last stage of the Clipper Race 2015-16 Race was rather risky. On board, the tension was felt during the first few hours of racing. Smiles appeared over time and our happiness exploded as we crossed the line two places behind Derry~Londonderry~Doire .

“We completed the series with six overall race wins and 10 podiums. The result is fantastic, a fruit of labor from a very hungry team. We are all proud to have accomplished this great challenge. The next challenge will be getting used to life back on dry land again,” Olivier added.

Clearly disappointed not to have been able to overturn his rival despite giving everything to achieve a winning performance in the final stage, Derry~Londonderry~Doire Skipper Dan Smith, from West Kilbride, Scotland, whose team claimed the podiums in seven races, said: “We set out to win this race to London, as we have done the whole way round the world, so it is great to go out on a high.

“We knew our fate wasn't in our own hands so all we could do was give it our best shot and the team has proved how strong we are. Today is a very special day, it's hard to believe that we have finished the race, but our aim was to be competitive, get everyone round safely and to have fun doing it. I couldn't be more proud of the crew,” Dan added.

David Mercer, CEO of British FinTech firm and Team Sponsor LMAX Exchange, who joined the team for Race 6, the Sydney Hobart Race, congratulated his team as he said: “We are thrilled to be crowned the overall winners of the Clipper 2015-16 Race. I’d like to thank all [58] crew who contributed to this herculean effort with special mention to our [8] round the worlders – the glue that kept our team bond strong throughout. We were very fortunate to have a mercurial skipper in Olivier Cardin and I thank him wholeheartedly for his sailing brilliance.

“Well done to all the teams and crew for completing the circumnavigation. Each and every one of you is an inspiration to us all.”

GREAT Britain takes the third place on the overall race standings. Despite finishing in tenth place in Race 14, the team’s result was enough to keep Garmin (fourth overall and fourth in Race 14) behind on overall points.

Second to finish in the final race of the series last night, the only one of its kind which exists for amateur sailors, was Visit Seattle.

Skipper Huw Fernie, whose team’s strong finish in the series comes fresh off its win in Race 13 last week, said: “We had a great last race of the series. As always it had a bit of everything and at times we could see the whole fleet in front of us. The team worked incredibly hard and kept pushing Visit Seattle all the way, it's incredible to think of the journey we are finishing today, and how far we have all come to be here. We're all immensely proud of this race result especially as we were so close to Derry~Londonderry~Doire at the end.

“A huge thank you to all our supporters throughout this adventure who have helped us keep spirits high through the tough times, see you all in St Kats very soon,” Huw added.

To see all the final standings, click here for the leaderboard.

All twelve teams will parade up the River Thames Saturday morning, with Tower Bridge lifting twice for the teams to pass through.

A Prize Giving ceremony will then take place in St Katharine Docks in front of thousands of spectators and race fans to mark the conclusion of this unique ocean odyssey.

During the 11-month long race, the amateur crew endured some of the most extreme conditions ever experienced in the event’s 20-year history.

Held biennially, the next edition of the Clipper Race will start in Summer 2017.