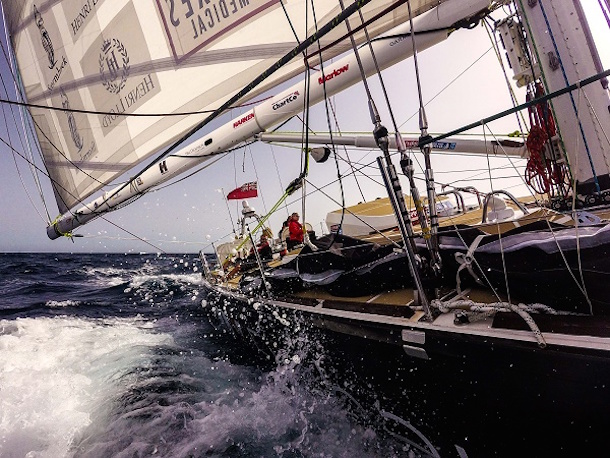 With both boats making speeds in excess of 11 knots, they are expected to cross the Scoring Gate line later on this afternoon.

Daniel Smith, Skipper of Derry~Londonderry~Doire, explained this morning: “It became apparent that GREAT Britain was starting to creep away. I gave the options to the crew. Either carry on as we were and pick up one point for hopefully being third through the Scoring Gate, or step it up a gear and chase down second place for two points. The decision was unanimous and was my preferred choice too. We were going to start pushing harder.

“Our plan was to head south rather than west in order to pick up the stronger winds. At around lunchtime we peeled to a heavier kite as the wind was 18 knots or more. This is what we’re looking for.

“We are coming in to the Scoring Gate from the east and GREAT Britain from the north. The yacht is just beginning to show up on the Automatic Identification System so hopefully GREAT Britain Skipper Peter is asleep. The boat and crew are working fantastically. There will still be a close race on.”

LMAX Exchange crossed the first Scoring Gate of the Clipper 2015-16 Race at 1842 UTC on Friday.

Skipper Olivier Cardin said: “Three Points! Is it basketball!? No, it's the first three points awarded to us. We are all proud of this first part of the leg. As we have been leading the race almost all the time since the beginning, it's fair to collect the three points.

“Next challenge – to collect the Ocean Sprint points.”

Qingdao and Garmin have also been battling it out to cross the gate further to the east, but are now 125 and 200 nautical miles behind GREAT Britain and Derry~Londonderry~Doire.

Will Derry~Londonderry~Doire manage to overtake GREAT Britain and claim two bonus points? See the Race Viewer for the latest updates, as well as the Clipper Race Twitter and Facebook feeds.