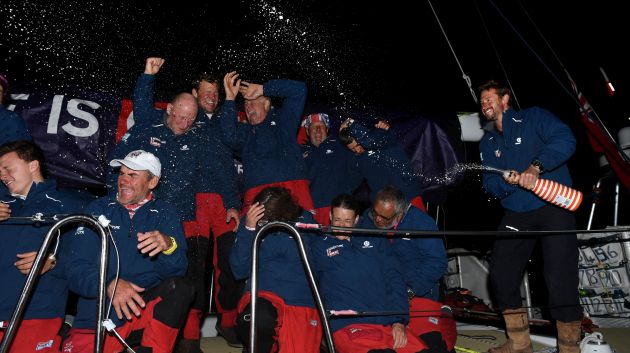 LMAX Exchange took the maximum 17 points available by also winning the Ocean Sprint (an extra two points) and Scoring Gate (an extra three points) and will also regain its overall lead in the Clipper 2015-16 Race.

Skipper Olivier Cardin said: “This was the best win yet. It was a complete race with everything from a tornado two miles away which was very impressive to big waves, upwind sailing close to the other teams and big surfing downwind doing more than 30 knots. We never let up and the whole race was like the Ocean Sprint for us.

“The whole team is really happy to have secured a maximum 17 points to reclaim the top of the overall leader board. We are now going to prepare for the Rolex Sydney Hobart Yacht Race. We prepared the boat well in Albany and didn’t have any damage so we will be doing the same again here to be ready,” Olivier added.

Clipper Race Chairman Sir Robin Knox-Johnston sent a congratulatory message to all race crew for the way they dealt with the particularly challenging upwind conditions. He said: “The boats and crew have done extremely well considering the very unpleasant conditions they faced on this leg. They rose to it magnificently and showed that they are the equal of any of the professionals that venture into the Southern Ocean.

“I am so proud of them and they should be proud of themselves. They have taken on the worst and shown that they can deal with it and compete at the same time. What a great introduction and preparation for the Rolex Sydney to Hobart Race.”

Skipper Peter Thornton, whose GREAT Britain team crossed the finish line next at 1438 UTC (0138 local), said: “It was a tough race and I am very pleased with the boat and crew. Twelve hours ago I was getting very stressed and was thinking I could not get the boat to go any faster, and a couple of things changed, and it shows that you can never give up. We just pipped Ash and his Garmin crew at the end.

“We had to battle the East Australian Current against us, and that just made the difference against us and Garmin in the end. We pushed the boat hard and at one point coming round the south of Tasmania, we had 60 knot gusts when it was already blowing 40-50 knots. We just had to go with it and were surfing along at 20+ knots. The crew have had their first taste of the Bass Strait, and they have been asking for a briefing about what to expect on the Rolex Sydney Hobart Yacht Race too,” Peter added.

After finishing at 1639 UTC (0339 local). Skipper Ashley Skett also reflected on the hard-fought battle between his team and nemesis GREAT Britain.

“I feel pretty shattered,” he said upon arrival. “The first week was very tough the conditions didn’t really let up with the close-hauled sailing and especially with the battle with GREAT Britain the whole way. They are turning out to be quite a problem for us every leg. It seems to be very close competition with them. Pete and I have a similar take on things and I can predict what he is thinking a lot of the time and that makes for some close, exciting racing.

“ For the race fans, it’s good to watch back home, but tiring for us. We damaged our heavyweight spinnaker yesterday unfortunately as we were pushing very hard, and that is where Pete took advantage of that happening. We were catching up at the end, but it just wasn’t quite enough time. We have learnt to sail the boat really well now and we are looking forward to continuing our good form in the Rolex Sydney Hobart Yacht Race,” Ashley added.