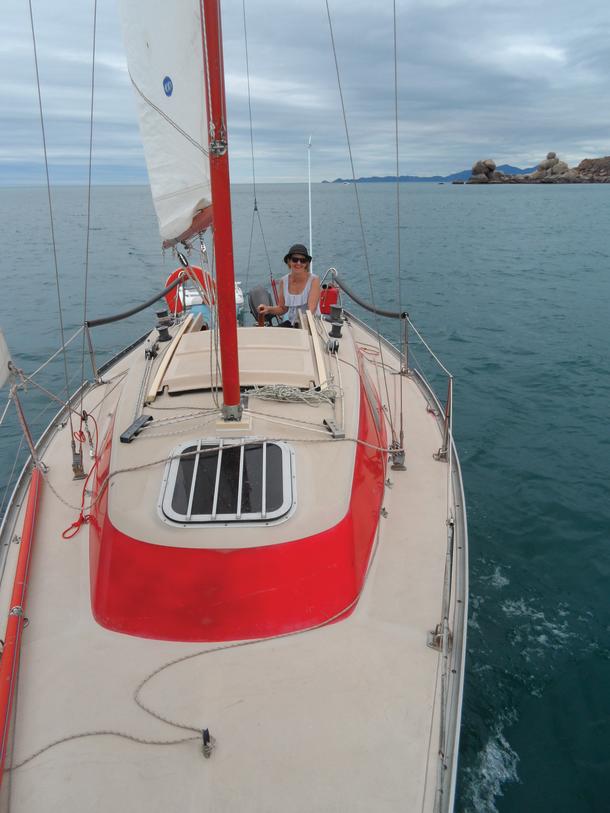 Small Hotel is a Seaway 25 trailer sailer built in 1978 and designed by the late Doug Peterson.

Although the design was originally more racing orientated, we have found her to be a handy small cruising boat. The fractional rig with small headsails, combined with a mainsail that can be depowered, makes her easy to sail shorthanded.

Most of the Hotel’s ballast is internal so the keel is relatively easy to lift up and down on a simple rope pulley system. Small Hotel is a Mark 1 and still has the original rudder setup where the rudder sits in a cassette through the cockpit floor.

We purchased SmallHotel in 2004, she was bought to replace a 22 foot trailer sailer that had become a bit small due to the fact our two daughters were getting older. It was becoming obvious that a bit more space between crew members was needed. Back in 2004 we were based in Launceston and had many enjoyable seasons racing and cruising the boat in Tasmania.

We are both still working and the trailer sailer has allowed us to make the most of the sailing time we have available. We can tow the boat to a popular cruising area, enjoy the highlights then tow the boat home.

The downside of the trailer sailer is lack of space. While been on the boat has taught us to be tidy and put things away, a shower would be nice. We swim regularly but it is just not the same as a shower.

While living in Tasmania most of our cruising was based on Tassie’s east coast; Maria Island, Coles Bay and Schouten Island were some of the worthwhile destinations we visited. Seldom are east coast anchorages crowded and the scenery is stunning.

Being Tasmania there is the occasional un-forecast change of weather and wind direction thrown in just to keep you guessing and disorientated at 3:00am in the morning.

With sailing there is always something to learn: learn to sail, learn to race, learn to handle bigger boats and not run into things, learn to get the boat on and off the trailer and stay married. Then we had to learn to go cruising.

We read the books on how to do cruising stuff, we felt we passed the theory test but the practical assessment can sometimes take a bit longer to get right. One such moment was heading back to Triabunna from Maria Island after a very relaxing four day cruise. We were sailing on a ¾ reach with full main and small jib, the wind was gusting 20 knots and we were catching the odd wave; life was good, the universe was in balance.

Suddenly the boat stopped dead in water, my first thoughts was that we had hit a submerged object. A quick check proved that was not the case, then I looked astern and could no longer see the inflatable dinghy and outboard, both of which I had borrowed for this trip from a friend.

I then looked straight down into the crystal clear waters of the Mercury Passage and there was the dinghy and outboard combination, straining at the end of its six metre painter. Our borrowed dinghy had decided to bury itself into the back of a wave and head for the bottom. As I watched, the dinghy turned on its end and then hurtled to the surface behaving much like a breaching humpback whale.

The borrowed dinghy and outboard survived. All our shoes, which had been stored in the dinghy, disappeared. These days we remove the outboard, keep the dinghy on a much shorter leash and shoes live in the back of the cockpit.

One of the things that I enjoy about sailing is that you can participate in the sport your whole life, the sport crosses many boundaries: age, gender, etc. When you own the same boat for 14 years it almost becomes part of the family, from 12 years of age our eldest daughter always did the foredeck on SmallHotel. Then later on, as she became confident with the boat, she would take it out day sailing with her friends.

Our younger daughter while maybe not quite as keen on sailing as her older sister still enjoyed the family trips on the Hotel and it has created many great family memories.

A change in jobs bought us to Townsville six years ago and both our daughters have now left home. Cath and I now have the boat to ourselves, plus we have a whole new set of cruising grounds to explore.

Magnetic Island and the Palm group are our backyard. ‘Maggie’ is our weekend destination it has great secluded beaches, seasonal waterfalls national parks, good anchorages, restaurants and bars. It also moves at a slower pace to Townsville, which it could be argued moves at a pretty slow pace anyway.

Herald and Rattlesnake Islands are nearby; these islands are both worth visiting but check with the coast guard beforehand as the armed forces use the islands a few times a year for live firing exercises.

We have noticed these days our cruising trips are getting longer and we are spoiled for choice in regards to destinations. One of our first longer cruising trips was sailing to Hinchinbrook Island from Townsville.

We took seven days visited Havannah Island, Orpheus Island then pulled up the keel to get the Hotel into South Zoe Creek on Hinchinbrook Island. Here we were able to wash off the salt under the waterfall that tumbles down into a picture postcard swimming hole.

Due to the predominance of the south east winds that time of year we decided to make this cruise a one way trip and bring the boat home on the trailer.

The haul out at Lucinda was uneventful and the ensuing 1½ hour drive home was preferable to the alternative of sailing back to Townsville against the 20 knot south-easter.

To make the SmallHotel more user friendly in the tropics, I recently installed 200 watts of solar panels, a MPPT regulator and 170 amp hours of deep cycle batteries. This has meant we could place a large 12 volt fridge on the port bunk doing away with both the food and drinks Eskys. No more cheese sloshing about in that milky watery solution that used to appear at the end the first day. More importantly, the beer is always cold.

We have also installed a macerator toilet, I will not bang on about the evils of the Porta Potty it replaced but I am sure you get the picture.

We can now stay out for up to twelve days in relative comfort, except for the previous comment about no shower.

The next long cruise was nine days around the Whitsundays. We drove the 3½ hours down from Townsville, launched and spent the first night at Nara Inlet.

Some of the highlights were visiting Butterfly Bay, Whitehaven, then pulling up the keel and spending a great night with friends up in Hill Inlet. Some of the lesser moments was having to reef every day as it was windy every day, plus accidently surfing the boat through Solway Passage.

The guide ‘100 magic miles’ was invaluable, we should have read the bit about travelling through Solway Passage at slack water rather than when the tide is running flat out, but we know for next time.

Earlier this year we towed the boat down to Hervey Bay and spent a week sailing along the western beaches of Fraser Island. We were able to lift the keel and get into Coongul and Wathumba Creeks.

On this trip we took another couple with us, our friends slept ashore in a small tent. The weather was perfect and stayed south east all trip. In summary we intend to head back during whale season as it was well worth the 2400 kilometre road trip.

Cath and I share all roles on the boat. This works for us and has been very handy as we check each other’s navigation and trip planning. It has definitely saved us from the odd unplanned character building moment; two heads are better than one, no Tasmanian pun intended.

A recent addition to our sailing crew is our kelpie-sized RSPCA rescue dog Freya. The dog has settled in fine, she is taken ashore twice a day to do what dogs do, but also loves the inflatable paddle board. Occasionally she will jump off the boat to chase fish and turtles around the bay. This can be a bit disconcerting at 4:00am if you are trying to head back to the ramp early to catch the tide.

All in all the dog is happy and she will curl up and sleep on the cockpit floor if we are leaning over too far.

Cath and I are only the third owners of SmallHotel, the boat has always been well looked after and is still going strong despite her 40 years.

While the boat is fine, the original trailer failed to make the 40 year mark, we pretty much killed it during the drive up from Tasmania. The old trailer has now been replaced with a new one that has breakaway brakes so we are legal to tow anywhere in Australia.

Looking forward, we can see a time in the not too distant future when we move aboard a bigger boat full time, we also want to sail further afield so the SmallHotel will be passed onto its next owner.

You cannot look at SmallHotel and not notice the stripes, these are original. The boat was built in the 70s, maybe people were a bit more flamboyant with their boat colour schemes back then. But she is definitely easy to find in busy anchorages when surrounded by white boats.

Back in 2004, when we first bought the boat, the name SmallHotel puzzled me and I wanted to change it; then I was told the following story. SmallHotel was a demonstration boat for the original builder who used to keep a well-stocked bar down below.

The apparent sales strategy used on prospective customers was to take them out sailing on Port Phillip Bay and keep the drinks coming until they decided to pull out the cheque book. This may or may not be exactly how it happened back then but it was a good enough story to convince me to keep the name. ≈