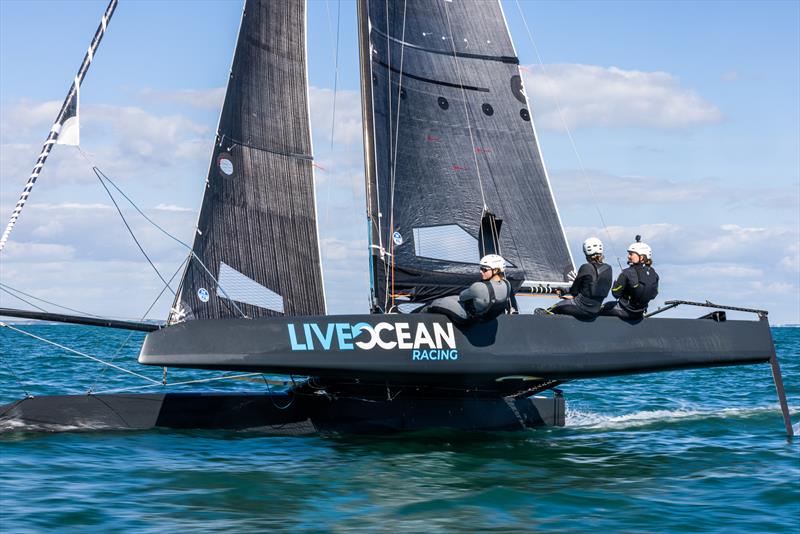 Peter Burling and Blair Tuke have launched Live Ocean Racing – a platform that brings together a talented and diverse team to compete at the highest level.

The establishment of the racing team is a continuation of the pair’s intention to use their sailing platform to connect people to the issues the ocean faces.

The first campaign for Live Ocean Racing will be the ETF26 Grand Prix, skippered by New Zealander Liv Mackay. It will feature some of the country’s most successful women sailors competing on foiling catamarans, accelerating the pathway into professional sailing events such as SailGP and the America’s Cup.

Mackay will be joined by a stellar line up of Kiwi talent including Olympic and world-champion sailors Jo Aleh, Molly Meech, Alex Maloney, Erica Dawson and Jason Saunders as coach.

Now in its fifth edition, the team will compete in the five-event series based in France and Italy starting this week.

Inspired by the catamarans used in the 35th America’s Cup, which went on to provide the base for the F50s in SailGP, teams will compete in 26-foot one design catamarans built for high-speed races reaching speeds of up to 35 knots.

“Sailing is evolving rapidly, with new technology and innovative boat designs dominating professional sailing,” Mackay said. “Up until now the majority of women have spent their careers in single or double-handed dinghies with very limited opportunities to move beyond that into professional campaigns and foiling boats.”

“The ETF26 Grand Prix offers opportunities for more time training and competing in foiling boats, a larger team environment and a chance to hone and refine racing skills. The boats are advanced and undergoing constant refinement so it’s awesome to be leading a team taking on this challenge. And with the announcement of SailGP and America’s Cup women’s programmes, it’s exciting to see more opportunities arise.”

Expanding on Burling and Tuke’s Live Ocean mission, Live Ocean Racing will operate independently of Live Ocean Foundation but share the same vision – a healthy ocean for a healthy future. The Live Ocean Racing team takes the message of positive ocean action to the world, championing the ground-breaking work of the foundation and its partners.

“When we started Live Ocean Foundation, we did it with the vision of using our sailing platform for good. We’ve launched Live Ocean Racing now as we’ve seen the need to provide more opportunities for women in foiling boats and felt that this was the right time and place to start,” Burling said.

“Looking ahead, Live Ocean Racing will break the mould of traditional sailing team’s assembling only for a single campaign, creating an agile team that races with purpose. ETF26 is just the beginning.”

“Many of those involved in the Live Ocean Racing team this year are also working towards the 2024 Paris Olympics and we know, managed well, this will ultimately make them better sailors.”

Live Ocean Racing will take on a range of ambitious racing events in the future.

“Our vision for Live Ocean Racing is to rethink what a professional sports team looks like. With purpose at the heart of the team, Live Ocean Racing will race for Aotearoa taking on awesome challenges at the pinnacle of sport, while championing action for the ocean on the world stage,” Tuke said.

“Pete and I are excited to see the team get onto the water and are their biggest supporters. We’re fully committed to Emirates Team New Zealand and the New Zealand SailGP Team but in the future, we’re looking forward to sailing for Live Ocean Racing. There are some amazing challenges in sailing that we haven’t tackled yet and it’s still a few years away but taking on something like the Ocean Race with Live Ocean Racing would be awesome.”

You can follow the action from the first event of the ETF26 Grand Prix on @itsliveocean on Saturday April 16 – Tuesday April 19 NZT.

The ETF26 Series is back for a fifth edition running from April to July:

Live Ocean is a marine conservation foundation committed to scaling up action for the ocean. Founded by sailors and ocean champions, Peter Burling and Blair Tuke, the foundation scales up marine science, innovation and outreach to connect and ignite people around the role a healthy ocean plays in a healthy future. We partner with exceptional New Zealand marine scientists, innovators and communicators whose work has global implications for the protection of the ocean and the life in it. To have a healthy future, we must have a healthy ocean.