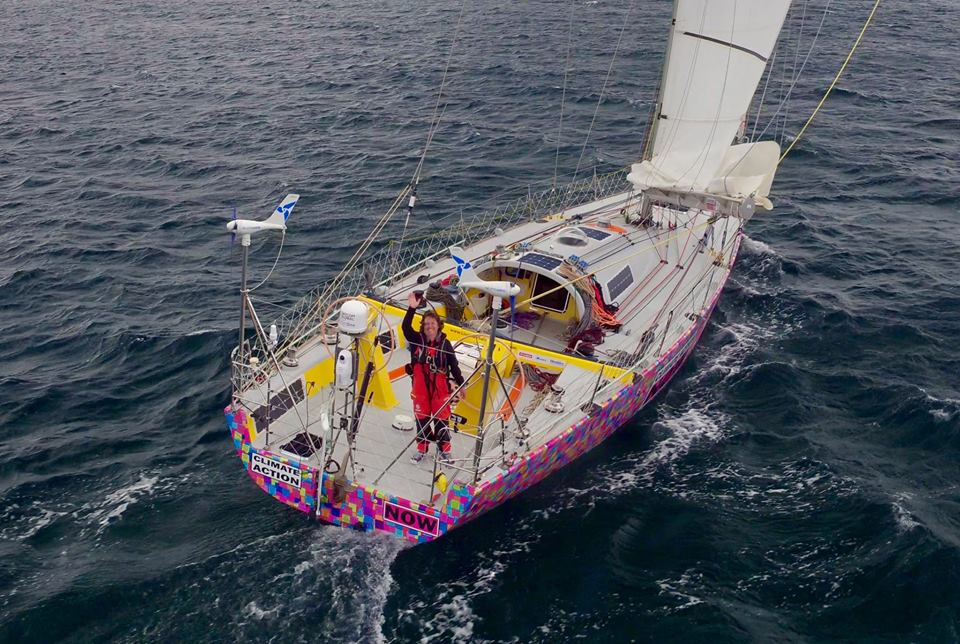 Yesterday afternoon after I just finishing my blog I was slammed out of nowhere with 40 knots of wind.  I'd spent the day “umming” and “arring” about shaking out to reef 2 and an hour after the fact I have 40 knots….  Ahh.  I put the third reef back in and 10 minutes later I was rewarded with 15 knots of wind and back to my 5 knots of boat speed.

This is such a juggling act because every time I am caught out like yesterday afternoon it is all quite a lot of extra wear on the sails and ropes. I still have 14,000 nm left to sail but at the same rate I don’t want to be sailing 5 knots the whole way around…

Once the winds dropped off I decided that for the night at least I would leave the reef in and sail slowly in the lighter winds in case there was another blow on its way.  Turns out I had a very uneventful night and could have easily shaken the reef back out to reef 2, hindsight is a wonderful thing.  Come sunrise I had not had much sleep sticking to my usual pattern of not falling asleep until after midnight so after a quick check and course correction it was back to bed for me.  I was still sailing around 6 knots of boat speed in a SW 15 knots so I felt that it was acceptable speeds for the time being.

As the day got underway my whole focus has once again been on the debate.  To shake a reef or not too???  Every time I finally made the decision to shake a reef as the winds have been 15 knots or less I would get on deck and be greeted with 25 knots and the boat would once again be maintaining an acceptable speed…  It is a slightly maddening situation and one that is hard to ignore.  I sit in the boat and watch the B&G instruments tell me I am going between 4-6 knots in a racing yacht that should be going 10 knots ……but again with the squally clouds all around I am still plagued with the question of do I or don’t I…

The boat can easily sail with the 2nd reef in at 30 knots should it be needed. With such a long way to travel the wear on the equipment is the focus.  Finally, after hours of indecision and seeing nothing over 22 knots all day I decided to shake a reef out…  Yes, ……I grew a pair…

So now I am happily sailing in 15 knots making much better speeds and averaging 7 knots which is my goal speed and feeling much happier that I have taken some action for the positive.  I am also only 10 nm off the edge of the continental shelf below New Zealand where the depth is about to go from 4500m to 172m so I can expect the sea state to get a lot messier and much much bigger.  Currently I have about 3m swell.

Aside from that I have moved the clocks forward again another hour so I am now matching New Zealand Standard Time which is UTC +12h and have less than 100 nm to sail before I cross the next great cape.  The South West Cape off New Zealand.  This will be the second cape of the trip with only four more to go.  The next bit of land following this will be Cape Horne off Chile and Argentina more than a 20-day sail away.  It is nothing but blue water to come and I still haven't seen any shipping on radar, AIS or by my eyes.

Well today dawned with 5 to 7 knots of wind from the South.  Not a lot to move in.  I was hoping that it was a temporary change so I left the 2 reefs in the main sail and put out a bit more jib instead.  I wasn't too keen to shake a reef as I would most likely need to put it in shortly after and I was still tired and thinking of my bed…

I had next to no sleep the night before.  I was sailing past the Auckland Islands and knew there were some fishing boats around and the occasional cruise ship so I wasn’t as relaxed as I have been.  I set the B&G radar guard zone alarms but with the squalls around the rain kept tripping the alarms.  I would be almost asleep and beep beep beep it would go.  So, whilst effective in spotting targets on the radar it meant very little sleep for me.

So after a morning of napping I went on deck to take a look around, I spotted an inquisitive seal who was taking a look at the boat but apart from that it was ocean all around me and not another sole insight.

The winds had by now steadied at 10-15 knots and the boat was moving along nicely.  The sun was out and the sky was filled with fair weather cumulus clouds.  As I was lapping up a bit of sunshine I realized that it might just be warm enough for a quick bucket bath on the back deck.  I have been wanting to wash my hair for several days now as my scalp had been starting to itch.

30 minutes later, once I had dug out a new set of clothes and boiled the kettle for some hot water I looked outside and it was cold, over cast and drizzling with rain, so the shower on deck was cancelled in lieu of a warmer spot inside the boat.  I did manage to wash my hair but I can’t say it was easy in a rolling boat. Now I feel so much better.  This was the first real bath of the trip.  Previously I had just been using baby wipes to keep clean but it’s never really the same.

With all this light wind I wasn't getting the speeds up to add any charge into my batteries.  As I needed all the instruments on last night and I still haven't had the opportunity to re-charge my redundancy batteries.  My primary system was getting dangerously low.
With the system supplied by Lithium Power I have stacks to draw from and you can use almost the whole charge of the battery, not just the top section like a lead acid battery.  Also for every amp in you get one amp out.  This is not the case with the lead acid you need multiple amps to go in before you can get your amp of power back out.  For all these reasons and more I have found the lithium system a great system to have on the boat.  The only thing you really need to watch is that the charge never goes below 10%.  If this happens you lose your battery and there is no going back.

This morning my charge was at 20%, a little too low for comfort. I also know that I have some stormy conditions likely tomorrow and Friday. I want to make sure that the boat is in tip top shape to deal with any situation that may arise during those conditions.  This includes making sure I have enough power for my auto pilots to run.  20% just doesn’t cut it, so it was with a heavy heart that I decided I would need to void the 100% eco powered part of my trip and turn on the generator to get some charge back into my batteries.  It might end up being a 90% eco powered trip.

I must say, I am gutted that I have needed to do this. I have been waiting for the right conditions to charge the batteries up for over 5 days but I simply haven’t had them. For the last week I have been using minimal power and running a mostly dead ship.  Only the bare necessities.

Unfortunately, this prolonged the power struggle but it hasn’t eliminated it. As I said in a previous blog, I am missing the one piece of equipment that would have picked up the slack when the other charging systems were not putting out.  Oh well, it can’t be changed and safety comes first.  I will try to minimize my usage of the generator and will log how many hours I needed to use it and let you all know at the end of the journey.

The winds are now a steady 15 knots from the W and I am sailing on a course of 60 degrees towards to the Antipodes Island.  The plan is to sail below this island but by traveling NE over the next day or so I should miss the worst of the swell coming off the forecasted Low heading my way.  I have now cleared both the Auckland Island and Campbell Island and I also managed another big milestone……..the of passing my second cape.  The South West Cape which is off the bottom of New Zealand was passed at 11:10:51 my local time this morning.  The next cape is some ways away.  It is Cape Horn.