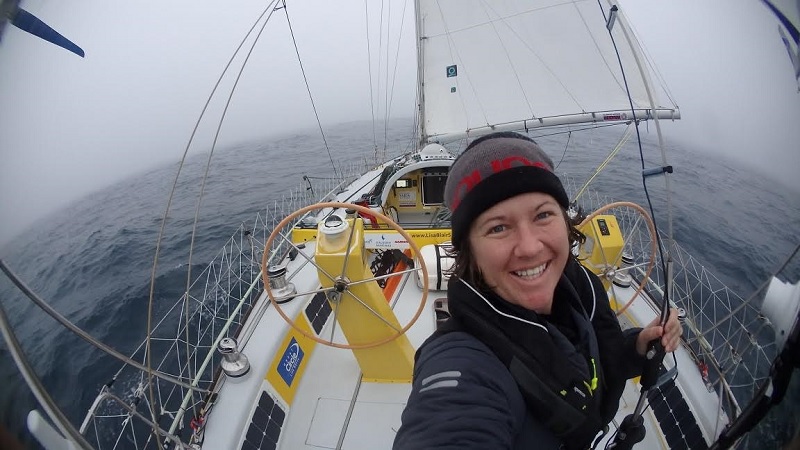 Lisa Blair has resumed her solo circumnavigation of Antarctica after breaking her mast suth of Cape Town. Despite sailing deep in the Southern Ocean in mid-winter, yesterday she had no wind at all!

After my nice hot dinner last night I went to bed.  There wasn’t much that could be done about the flogging sails so I just needed to live with it.  The winds were 10-15 knots from the west and I was sailing with the 2nd reef in the main sail and the storm jib and the Stay sail.  You are properly wondering why I didn’t shake out the reef in the main sail all the way however with the 2 reefs in the sail it flattened it and took out some of the weight so that it wouldn’t flop from side to side so badly and would help to stabilize the boat somewhat.  The swell is still quite large even though there is no sea state on top it is enough to rock the boat from side to side exaggerating the problem.  This just means for me that I go slow for a while and that I get very little sleep.

I sailed the best I could to course through the night and in the morning with the new weather info Bob (METBob) gave me a little more room on the course.  I could sail as low as 140 True if required.  This helped a lot in the morning when the winds were still from the West and I was able to come up on the winds a touch and stabilize the boat a bit more.  I wasn’t able to squeeze any more boat speed, so I resigned myself to a slow day.  I am sailing through a high-pressure system at the moment which we haven’t see at all since I left Cape Town.  With a high-pressure system, I get a really high barometer reading, mine is currently reading 1031mb, and I also get clear skies.  I went on deck this morning and my eyes were hurting from the glare of the sun.  This is something that I haven’t had to deal with for a few weeks, so I was quite surprised to see a big blue sky before me.  There was still a light fog around but it was so thin I could only see it in the distance.

I spent half the morning playing with the sails to see if I could get anything else happening but no joy.  At one stage I had the mainsail with the 2nd reef in, the storm sail and the stay sail all on the port side of the boat and then out on the starboard side I had the genoa trying to see if I could goose wing the boat.  It was a little bit of a success.  My boat speed went up a touch every time the genoa filled with wind but in the 8-10 knots of wind at the time it just wasn’t enough to hold the sail out against the roll of the swell, so it just kept flopping to the port side on each wave.  I decided that this would have to do, at least during daylight hours and went below for a while.

About an hour later the winds started moving from the West to the SW so I was able to hold the genoa filled on the port side of the boat.  In an effort to give it access to the winds I furled away the stay sail that was blocking it.  The boat started to move a little, finally and I was cruising at 6-7 knots for a time.  It was also short lived and another hour later the winds started to swing again and are now blowing from the SSW at the great speed of 6 knots…  So, I am now sailing at the almighty speed of 2 knots…

There is a positive to all of this.  The conditions were calm enough for me to make pancakes – always a plus – and the fact that by the shifting winds the high-pressure system is passing over me and hopefully in a few hours I will have some winds to play with.  Failing that the forecast for tomorrow is for increasing winds so I don’t have too long to wait until I am sailing again.