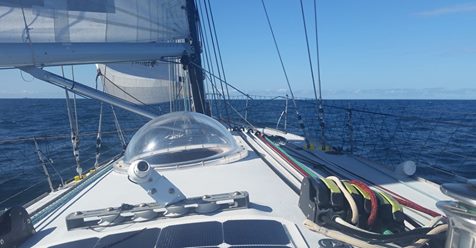 November 2, 2018. Lisa Blair is attempting to become the first woman to circumnavigate Australia non-stop and unassisted. At 6am Australian Daylight Time, she was off Cape York. Here is her blog from yesterday:

Last night was fairly uneventful as I was in open waters and managed to have consistent winds throughout the evening.  The swell has picked up a bit so it was quite rolley through the night, making sleep a little difficult and at sunrise I woke to find that shark reef was 20nm almost dead ahead.  I altered course 20 degrees to port and then carried on.  So for most of today I have been sailing along the edge of a reef system and am just clearing the last reef now.

The winds have been mostly 20 knots range blowing in from the East to SouthEast direction but the forecast shows that it is due to build to 35 knots by tomorrow evening.  This is a major bummer as I was due to arrive at Raine Island at around 5pm tomorrow.  At Raine Island there is a reef entry that is unmarked.  This means that there are no navigational aids like lights to mark the reefs or rocks as it is not a primary entry however it was the entry that other sailors on this route have taken in the past and would have been fine to enter in daylight hours.

Unfortunately I would be entering at sunset to then navigate 60nm through the narrow passages through the reef before reaching the main shipping lanes which are marked.  I had spoken with Bruce Arms before my departure.  Bruce is the current world record holder as the fastest person to sail solo, non-stop and unassisted around Australia in his multihull.  Bruce had used the entry at Raine island during his record trip however his vessel being a multihull only has a much shallower draft than my vessel and would likely have been able to safely sail over most of the shallows.  My yacht Climate Action Now has a draft of 3.5 meters making navigating around shallows more difficult.

So as I have been told, this stronger wind is on its way and likely to hit right as I arrive at Raine Island and I would either need to take the risk or heave-to over night until first light to make the entry.  I could also expect increased swell and the last thing I need is to be in one of those narrow channels and have the boat round up out of control from a larger gust of wind so in the interest of safety and the fact that I still have over 3/4 of Australia left to sail, I have decided to make the right choice and sail up and around the very top of the Great Barrier Reef.  This leads to a main designated shipping channel where every hazard is lit up with markers and lights so I will be more than able to sail through even in the night or with poor visibility.

Also given that I need to sail almost an extra 100nm to the entry I should arrive during daylight hours and be able to orientate myself before nightfall making for a safe entry through the reef even in 35 knots of wind.

So I have adjusted my course and am sailing quite quickly at the moment holding an average speed of 8.7 knots today and fingers cross I should start my approach Saturday morning.

The other really exciting thing that happened today was I was buzzed by the Australian Border Force Aircraft at 2.30pm today.  I was inside the boat completing a log and heard this really strange vibrating motor sound.  I instantly thought that it was my wind generator kicking it in however when I got on deck this very fast plane flew over nice and close before I was called on the radio.  Basically they need to know what your port of departure and arrival are as well as your port of registration.  I gave them the info and by this time they were so far in the distance that I couldn’t even see them anymore.  I guess I have this new visitor to look forward to over the next week or so which is fine by me as it’s rather exciting when a plane calls you on the radio.

Now the other day we also put a post on Facebook asking if anyone had any questions for me.  We have received a few so I will start trying to answer these in the blogs and if you have a question for me feel free to pop it in the comments.

So to start with I will just go with the first question received by Jim Pras is “What weather patterns are you expecting off North Australia and the west coast.”

Firstly thanks Jim for your questions and I am sure my meteorologist Bob McDavitt would be better equipped to answer this but I can let you know what I was seeing before departure as I was following the trends over the last month.

Above 18 degrees South I most likely was going to hit the Easterly to South Easterly trade winds which I thankfully have now sailed into.  These tend to carry to the start of the Gulf of Carpentaria however they weakened considerably past the Torres Straights and from what I could see if I ended up going south a little past the Torres Islands I would sail directly into a massive wind hole that seems to sit over the centre of the Gulf.

Following this as I passage through the Arafura Sea and the Timor Sea making my way West there was little standard except light and variable winds.  Lots of light and variable winds.  The interesting thing to note here is that the ocean is really shallow around this part of Australia at only 50m deep so if I was to encounter a large Low pressure system or early cyclone then I could expect to have some really sharp steep dangerous seas to go with it.  There are also some extreme currents from the large tides so I wont be sailing closer than 10nm from land where possible to avoid getting caught with current and no wind.

The light variable winds seems to continue down to Broome and so I would expect that this will be luck of the draw.  I also have lots of oil rigs to navigate around here so there will be an increase in shipping also.  From Broome to the North West Cape I need to cross a High Pressure system that seems to sit around here often before entering into the SW winds that spin off the Low Pressure systems in the Southern Ocean.  All in all it is going to be a fight the whole way around.

Now also keep in mind that I am completing this voyage right at the end of the season and I haven’t checked the grips for the North or West coast since I left Sydney.  I tend to only download my local area at sea.

So Jim I hope that this answers your question and if anyone else has anything else to add please post below.  Thanks everyone.