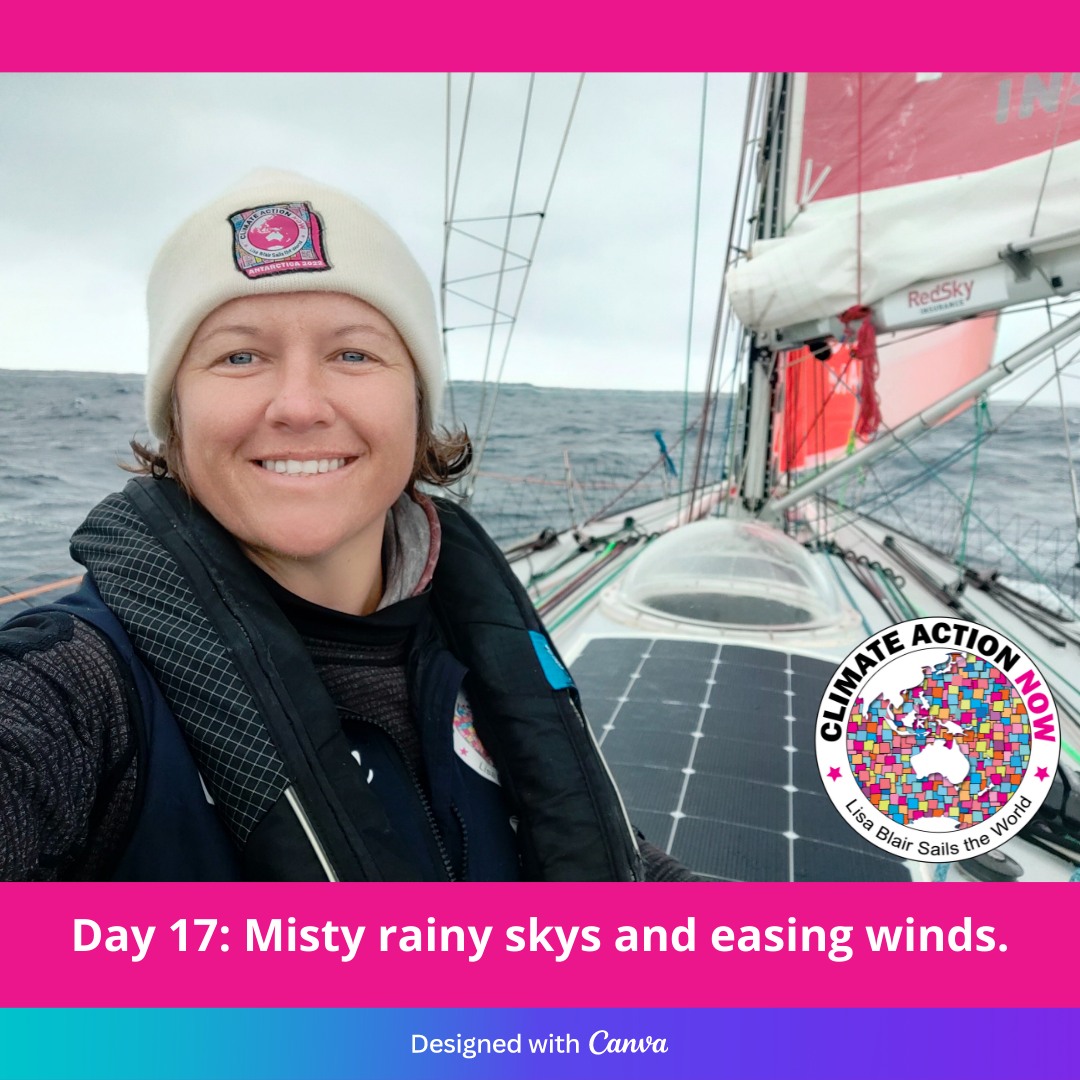 In her latest blog post, Blair struggles to get to bed early after making sail changes, re-fuelling and writing this blog and uploading media. She also celebrates a major milestone of this trip – the passing of New Zealand’s South Cape.

Well, unfortunately I didn’t get to bed last night until 4am and it was mostly my own fault. I procrastinated on transferring files from the cameras to hard drives until after my interview with Channel 7 and that whole process took a lot longer than planned. After that I still needed to edit the day’s video and photos and post this back to you all via the awesomeness of the Canva scheduler before I finally started writing last night’s blog.

I do have three silent wind generators and 1kw of solar spread over 13 x Solbian flexible solar panels and all of this power inputs right into the 800 amp Victron Lithium battery bank. The whole system was designed by Safiery on the Gold Coast. It is a great system but I am using so much power aboard running the science unit, auto pilots, radar and instruments all 24/7 that every three days or so I need to top up the system using the bio diesel from Bio Diesel Industries Australia and Refuelling Solutions to top the system up.

So last night at 3 am it was time to top the system up but I needed to first top up the day use fuel tank on the boat.  Normally this is a simple affair of turning on the right valve systems and then flicking a switch to activate the electric fuel transfer pump.  I have had this system in place for a few years. It has worked flawlessly all that time until the very first time I go to transfer fuel on this trip and the electric pump dies…  It’s not a major as I have a manual bilge pump in a box in the lazarette that I can install I just haven’t had the time to install it yet.

So for the last two weeks I have been using the jerry cans of extra fuel that I have stored in the lazarette compartment to fill up the day use fuel tank.  So, it was very brisk that time of the morning when I needed to climb into the back compartment, grab the fuel and then pour this into the deck top up port. By the time I had done all of this and got the engine set up and working right I was so ready for bed, and it was 4am.

Because of my late finish I decided to sleep late but I never get as restful a sleep this way.  I think I managed five solid hours which was better than other days and I finally surfaced at lunch time where I made my usual porridge. I mean technically it was breakfast time for me right.

Soon after waking up it was time to do the first micro plastic sample change over and then I did some emails.  So today actually ended up being a rather quite one aboard which is quite okay with me.

By 4 pm in the afternoon the winds that had so far been holding steady at 22 knots started to abate. I was suddenly seeing 12 knots and the likes, so it was time for some sail changes.  I know that over the course of tonight that lull or area of no wind is going to be pushed over my track so I am really trying to maximise my speed and direction to the east because if I can get far enough over then I may just be lucky enough to mostly miss this lull.

So after noticing that the winds had started to ease I was right on deck to shake out the first reef and hoist the whole of the main sail up.  This is the first time since that weather came through on Monday that I have been able to have all the sails up. I also ended up changing over the jibs so I am now sailing with the light air jib or the J1 as I like to call it.

Tonight I am hopeful that I can keep the light 10 knots of wind that I currently have blowing in from the west and even though I am not moving fast I am still moving and in light conditions that is all that matters. If you are moving, you will eventually move into new winds and for me that is expected to occur at around 4 am when the winds will shift to the NE. I will need to completely adjust the sails from a broad reach (sails are eased all the way out to catch the wind from behind me) to a close reach (where the sails are in tight to catch the wind on the bow).

I have Campbell Island roughly 100 nm to the NNE of me and New Zealand is about 430 nm to the North of me and in another 100 miles I will have passed the Southern Shores of the land with the great white cloud. I have however just passed the second milestone of the trip and that is the South West Cape off the bottom of New Zealand.  I think I need to have a little cape rounding ceremony tomorrow as I never had the chance with the south east cape of Tasmania to celebrate it.  The next cape I will encounter is going to be the famous and dangerous Cape Horn, just over 3500 nm away.

Tonight I am also trying to get to bed before midnight as I know I will be doing some sail changes in the early morning so before signing off I would like to take a moment to thank the following degree sponsors for their support.

164 East – Building Blocks Occupational Therapy, Speech and Physio – Thank you to Celeste Ashcroft for your amazing support.
166 East – Collective IT Solutions – Thank you to Peter Newhouse for your awesome support.
167 East – d’Albora Marinas, The Spit, Mosman – thank you for your support and always giving Climate Action Now a home in your Premier Marina facilities.