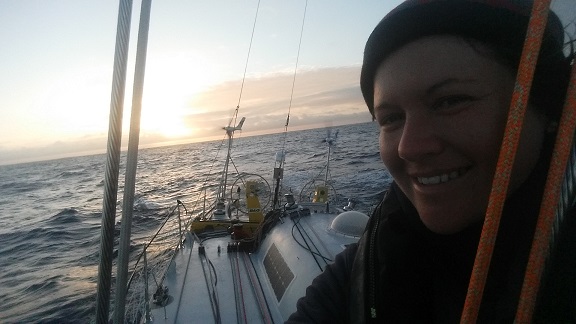 Sunset near the Falkland Islands.

Lisa Blair is attempting to become the first woman to circumnavigate Antarctica. She has rounded Cape Horn and is now heading across the south Atlantic towards the Cape of Good Hope.

Last night was intended to be a night of recovery with the winds a nice 10-15 knots from the South.  I was sailing a course directly east; the sky was grey with rain, but it was a drizzly light rain that was only effective in reducing my visibility.  As I managed to get a good few hours’ sleep in that afternoon it wasn’t until 2am that I finally went to bed for the night and it wasn’t a successful sleep.

As I still had the full main sail up and the no 1 jib I set a wind alarm on the B and G instruments that would alarm when the winds reached 20 knots.  I didn’t want to risk blowing out the sails in too much wind if I slept through. As I drifted off to sleep, I was awoken again by a beep beep beep.  Ahh the wind alarm.  The winds were just starting to touch 20 knots.  As this is a bit too much for my No 1 head sail I needed to get on deck and change the jibs over to the No 2 head sail.  It’s dark and cold, but at least at the time it wasn’t raining.  While I was on deck I was thinking 'do I or don’t I put in the 1st reef…'  I was making such great speeds on a beam reach, often hitting 11 knots.  I still didn’t feel that this was too much wind provided the winds didn’t increase any further. In the 30 minutes, I had been watching there had been no change, so I was confident that I could go back to bed…

Again I set a wind alarm but this time I set it for 27 knots. Sure enough, just as I am about to actually go to sleep beep beep beep.  It was nearing 4am this time and I was beginning to get rather frustrated with the fact that I had spent all this time in bed and had yet to get any sleep.  I went on deck again and put the 1st reef in.  I was so annoyed that I didn’t bother tidying up the ropes afterwards. This is very out of character for me as I am very OCD about having my ropes all packed away all the time, but I was so tired by now.  I figured that when I wake up I would likely need to shake out the reef again as the forecast was for some lighter airs.  So off to bed again and this time I managed to get a good healthy few hours’ sleep.  I woke up a few times to check on things from bed but all in all I managed a nice 6 hours sleep.  I still felt tired though when I woke up around midday.

The first thing I noticed when I woke up was the fact that the winds had dropped down to 13 knots and had shifted to the ESE.  So, with the sails set for a beam reach the boat was trying to sail close hauled.  This doesn’t work very well and my 3 knots of boat speed would confirm that.  Back on deck to shake out the reef to the full main.  Job done. I then re-trimmed the boat and started packing away all the ropes.

I was on the last rope when the winds started filling in again, ahhh.  I watched it for 10 minutes but with the strength of the winds at 17-18 knots and me trying to sail close hauled with the full main sail it was just too much. I was easing the sail so much that most of it was just flapping in the winds and not even working. So, again I put the first reef back in and finally managed to clear away all the lines.

Back down, I took a minute to see where I was in the world.  I had by now sailed clear of the Falkland Islands. I felt that this needed to be celebrated, as I was too busy in that storm to celebrate the Cape Horn rounding, so it was going to be pancakes for breakfast.  Yum!  I cut each pancake in half.  On one half I had some of the Dick Smith Food Strawberry Jam.  On the other half, I had Maple syrup.  My spirits were bolstered by this.  I just felt much happier on the boat.  Those frustrations from the night before were now behind me.

One of the more important jobs that I needed to do was repair the manual bilge pump.  The night before it got a split in the rubber, preventing it from working.  I wanted to strip it apart and see if I could run a repair.  I happened to have on-board a tyre repair kit that we used to patch a small hole in the rudder boot. This is a bit of truck tire tube that you clamp around the rudder shaft, as a secondary means of preventing leaks in the steering compartment.  It took me a few goes to get it to stick but after using my cheese grater to scuff up the surface I finally got the patches to bond. I held them together using a locker lid and a clamp until the glue set.  Success! I once again have a manual bilge pump and just in time to catch a lovely sunset.

Still feeling tired I went back to bed for a few more hours and have now just got up at midnight my time to have something to eat and to phone back to my shore support crew, we have a decision to make.  Do I sail north or south of the South Georgia islands?  By going south, I could save a week of sailing on my home return, but I would need to be sailing into the Antarctica Polar convergence line, where the sea temperature will drop off to 4 degrees and maybe even as low as 2 degrees. This would bring with it the risk of ice bergs. We are very fortunate to have the support of C-Core who are monitoring the ice berg movement on my behalf, so that at least I know where they are when I sail past.

The other consideration of this is that I may get ice forming on the deck and there is the potential for the water in the tanks to freeze. So, I am less inclined to sail to the south of South Georgia islands.  By going North, I will be sailing a greater distance due to the curvature of the earth, but I will have a lot less issues with the cold.  There is a spot over by 42 degrees W where I will have a short sea temperature drop to 4 degrees and I think that this will be enough.  I will let you all know the outcome tomorrow.

For now I am still sailing in 25-30- knots of wind and the boat is maintaining a relatively good speed of 7-8 knots.  The winds are forecast to veer to the South again and I will likely have better sailing then.  Right now, I am punching into a SE swell and the boat is healed over on a 30-degree angle smashing off waves….