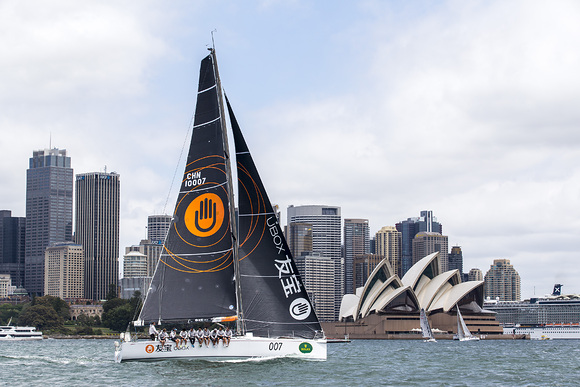 UBOX, a relative newcomer to international yacht racing returns for her second Rolex China Sea Race and Owner, Wang Bin, says he is approaching the 2018 edition differently “Honestly, the preparation for 2016 Rolex China Sea Race was conducted in a rush right before the event as we were so new to the event, although we received tremendous help from the Royal Hong Kong Yacht Club and even from the other boats.  We learned a lot from the 2016 race and will start our 2018 preparations as early as possible.  This year we are entering the race with different boat; a Cookson 50, and hopefully the overall performance will be better. “

Of their 2016 experience, Wang Bin recounted “It was very exciting to enter the race for the first time.  We managed well on the start line and became one of the leading boats out of Victoria Harbour – despite the heavy rain shutting the wind off completely.  Everything was going well until the jib foot tore during the first night followed by severe damage to the main sail.  The team contemplated retiring from the Race and sailing back to Hong Kong but persevered to repair the sails and carried on until the finish; completing our first Rolex event.  We were disappointed for sure by the result but that encouraged us to be better prepared for the following events including the last year’s Rolex Sydney Hobart which had an entirely different outcome for the team.”

With the experience gained at the 2016 Rolex China Sea Race, Wang Bin and his crew entered the 2016 Rolex Sydney Hobart Yacht Race. Wang Bin added, “Both are blue water classics and both need meticulous preparation as you have no idea what is going to happen out on the water… we definitely learned the importance of such preparation from the Rolex China Sea Race and we applied those lessons to the Sydney Hobart.”

Closer to home, Wang Bin is confident that the entries from mainland China will at least double for the 2018 edition; “It’s a natural progression in the growth of our sports with more boats, more sailors, more experience.  Also the success and profile of existing Chinese teams in the international sailing world encourage the others to have a go. Rolex China Sea Race is the most accessible long distance blue water event for those in the mainland China and there are now a growing number of teams which are capable of safely taking part in the event.  I would say to the potential owners or skippers that the Rolex China Sea Race is a fantastic experience but don’t take my word for it – you need to experience it for yourselves”.