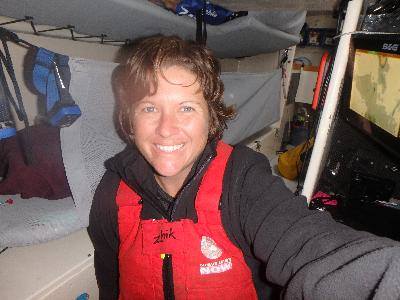 Winds throughout the night have maintained a healthy 15 knots from the WNW making my course of 080 a comfortable downwind run.  When I eventually surfaced from my pipe cot of a bunk to greet the day I put a gybe.  Bob tells me there is a very large high pressure system to the North of me so we are now diving south once again to get around it.

Once I had gybed I settled on a course of 140 degrees or SW and the winds decided to be nice and back to the west.  Throughout the day, the winds have maintained between 10-15 knots of breeze and has now come around to a WSW direction allowing for me to change course to 125 degrees.  This is ideal and not only gives me some good comfortable sailing but I am making the desired course as well.

This morning I also had an impact to the hull from an unknown source.  I was sitting in the Nav station writing a blog when I heard a almighty wack on the side of the boat.  It sounded like it was forward.  It also sounded a lot like a wave.

The waves can hit so hard it sounds like a brick wall.  The only reason I don’t think it was a wave is because when a wave normally hits like that you have the bang and a second latter you can hear torrents of water landing on the deck.  I had the same king of bang and then nothing…  The boat was pushed 50 degrees off course into a round up and stalled out for a minute.  I was definitely hit by something.

I didn’t know what had happened so I bolted on deck to see if I could see a whale or a sunfish or anything.  There was nothing but the clear blue ocean with the swell behind me. Nothing coming across my bows.  I looked around but there were no signs of damage and no water ingress.

I also don’t think that the impact was hard enough to have done any damage to the hull, it was almost like a glancing blow.  With so much debris in the ocean just drifting around it could have been anything…….and will now remain a mystery.

I have been sailing with 2 reefs in the main and the No 2 jib however at sunset I changed the jibs over on the furlers.  I was sponsored 2 Pro Furl furlers from Wrichard Pacific, one for each headsail. To be honest this trip would be a whole lot more challenging if I did not have them.  They are a handy piece of kit and for anyone that doesn’t know, the furlers allow for me to always have the sails on the fore-deck and instead of dropping the headsails I wrap them up to pack them away. You can sort of roll the sail out, and pull it in as required.  Its simple and also allows me to reef the sails at any point. So, if the winds are very strong I can just have a tiny piece of sail out.  This make it simple to change sails, I simply furl one away and un-furl the other one with minimal effort.

For my sails I have had Quantum sails custom design for my mainsail, the two headsails that can be furler reefed as well as the storm sails.  This is a very specific trip and is brutal on the equipment. I was always about the reliability of the equipment to ensure that the trip was successful.  The most important pieces of equipment are the sails by Quantum sails and the rigging supplied by Arcus wire and rigging.  I can’t have one without the other and if either fails it could affect my trip. It was important to me that I got the best in the business and that the rigging and the sails were both custom for this trip, ie. strong, durable and able to last the miles.