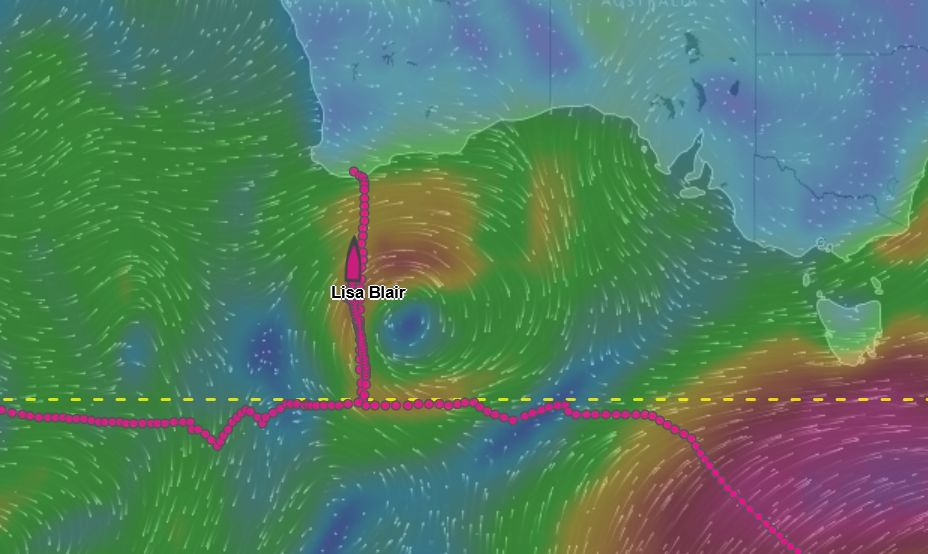 Lisa Blair has completed her circumnavigation of Antarctica below 45deg S, becoming the first woman to do so. She is now just 230nm from reaching her departure port of Albany in Western Australia. This blog was filed the night before…

Last night ended up being a good night for miles considering what the forecast showed me.  I thought that I was going to be in for a night of light winds but instead the winds maintained between 15-20 knots and was blowing in from the SSE allowing me to sail 8-10 knots on a broad reach.  It was nice for a change to have every mile sailed a mile in the right direction rather than all this zig zagging I have been doing.  The winds decided to drop out towards the morning a touch allowing me to shake out the first reef in the main sail and change the head sails over so I was now sailing on the genoa.

I was so wired last night from crossing my outgoing track and completing a full circumnavigation that I didn’t manage to get to bed until 3am.  I have been trying to get into a bit of a routine with Albany time so that when I get back on land I am not so out of sorts sleep wise however it doesn’t seem to be working as every night that I have tried for an early night sleep the wind has caused me to be on deck through most of the night and then for some reason I am not that tired in the day.  I have tried to nap but just find that it ends up making my sleeping efforts in the night even worse as I don’t seem to then be tired enough.  At the moment I seem to be staying awake until midnight most nights or later and then getting up around 10am depending on how much I was needed on deck during the night.  This morning I didn’t surface properly until lunch time where I then proceeded to have my regular porridge.

I have also started to run out of some of my yummy foods, I have no sultanas left – normally I would cook the porridge and then add a handful of sultanas or cranberries along with dome coconut flakes to just add a little extra goodness.  So, no sultanas, cranberries or coconut and I am almost out of honey.  To add some flavour. I have started to add some tinned fruit to the porridge and then cook it.  This makes the tinned fruit hot making it feel like I am eating a pudding instead of breakfast.  Dinner had become a bit plain as well as I have run out of my favourite freeze-dried meals.  The Bare Burrito is my favourite and I have one left. I will likely have that on the last night at sea.

Something else that I have noticed is that the roof of the boat is no longer raining….  I have moved far enough north that the conditions are now warmer and I am no longer getting such extreme condensation on the roof.  Throughout this whole circumnavigation I have put up with it raining inside the boat.  Every time I fall off a wave the build-up of condensation on the roof would fall off onto my head, laptop, book etc.  Even while I was sleeping I would get the odd drop on my face waking me up but since yesterday I haven't noticed it.  There is still some moisture on the roof but nothing like what i have been living in for the past few months so that is a plus.  All these little signs mean that the end of my journey is near.

Currently I have 405 nm left to run until Albany but the wind gods are not helping me.  Today the winds continued to ease and veered to the east so that I was sailing a beam reach course. I have the centre of a Low-pressure system passing over me so the winds will travel in a clockwise direction in the Southern Hemisphere so as it passes over I will have the winds going from the SE to the E to the N to the NW and finally finish from the S.  However right in the middle there is no wind as I sail through a huge wind hole.  For the next several hours I will be moving very slowly as I now have 5 knots of wind making my boat speed 1.5 knots….  The winds have been jumping around a lot since I entered this wind hole but are currently blowing from the NE.  Again, the alarms are blaring as the boat struggles to maintain steerage in such light conditions so my plans of sleep have again gone out the window.  Whilst this is again frustrating I do know that after this I have a fairly clear run for Albany so I just need to grit my teeth and bear it.  ETA is still Tuesday.

I just thought I would invite anyone who happens to be around, in Albany, with spare time to the Due South Hotel (near the marina) to celebraite Granpa's 87th Birthday.  We will be there today from 12.30 till ?  We were sort of hoping Lisa would come in today but not to be………we will just have to celebrate with out her………..it is getting really exciting now…….cant believe she is actually getting so close.  So, anyone and everyone is welcome.
Cheers,
Linda (mum)