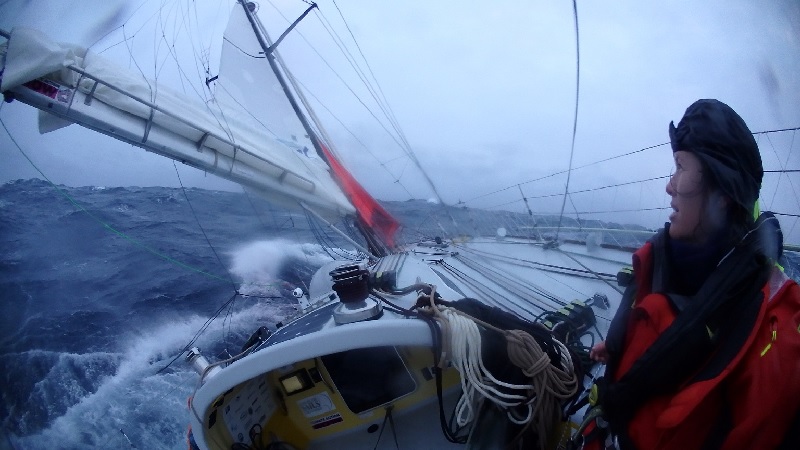 Lisa heaving to in the Southern Ocean.

Lisa Blair is attempting to become the first woman to circumnavigate Antarctica single-handed. Following her dismasting and subsequent repairs, she has left Cape Town and is heading for the point where her journey was interrupted, but this means sailing in the Southern Ocean in winter. Lisa explains the problems:

As you all know I have had a large storm bearing down on me.  The further south I could sail the less wind and swell I would encounter and the safer it would become.  So yesterday at sunset I made the decision to keep sailing for as long as possible and only hove too when  the conditions became too difficult to sail in.

I was sailing on a broad reach, so downwind, and making good progress to the south however by midnight the winds were steady in the low 40 knots range and gusting in the 50-knot range.  Even though I was sailing with the wind, as soon as the winds would get above 40 knots the boat would just get sucked up to windward and off course, As you can imagine, the boat would then become a noise box with all the alarms going off telling me that I was off course.  I would then get a little lull in the winds and the boat would correct its course.

These roundups were rare throughout the early part of the evening but by midnight the alarms were going off almost constantly and I finally decided to put the boat into the hove too position.  I got kitted up with my offshore foulies from Zhik and started to make my way on deck.

It was rather difficult just getting out of the hatch as the boat was leaning over so much.  I managed to scramble on to the deck and set about heaving too in the dark with only my head torch to guide me.  It was a full-blown gale outside with the tops of the waves getting ripped off and sheeting sideways. The swell was up and as I was leaning over so far occasionally it would feel like I would have a 5 meter drop if I fell, looking down the boat to the other side of the deck.  It was cold too…

I have now figured that if I hove to on one tack compared to the other the amount of forward drift will impact my course, so in order to make the best course to the south even when drifting I wanted to heave too on a starboard tack (with the wind coming over the starboard side of the boat) I was however sailing on a starboard tack.  To heave too I needed to have the storm jib sheeted in on the windward side so I decided to centre the mainsail, gybe the boat to give me a chance to change the jib over and then gybe back to the starboard tack with the jib sheeted to windward.  All I then needed to do was turn the helm full lock to windward and amazingly the boat just sits there beam on to the weather creating a nice slick that breaks the dangerous waves.

I also have found it preferable to gybe the boat to get into position in these conditions rather than tack the boat.  My reasons are that I only have a very small amount of sail up with the 4th reef in and providing I centre the boom and make sure that the mainsheet is winched in very tight beforehand it is quite easy.  If I try to tack in that much wind with such a small amount of sail up it can be very hard just to get the boat through the wind and complete the tack, it would also take me several goes to tack this way but I can gybe the boat ever time with no issues.  So, for me this is the easier path.  So, the rest of the night was spent with the boat heaved too as I sailed through the cold front associated with this nice big low-pressure system.  Tonight, I am battling with the rest of the storm system.

When I awoke this morning after a very restless sleep, due to the winds reaching 50 knots and making such a racket, the winds were back to the somewhat normal speeds of 35 knots gusting 40 knots and at 10 am I decided to try and sail again.  Bob (metbob) had sent me an update on the forecast but the conditions were still showing winds up to 60 knots and waves 10 meters steady with the occasional 15m wave scattered in between.  I was trying to get a bit further to the south to hopefully lessen the impact of this storm.

The boat handled the conditions okay and it was only when the winds got extra high that the B&G auto pilot struggled.   At sunset, I went back on deck to put the boat into the hove too position to get me through the night.  The barometer is now sitting at 971mb so almost at its lowest point but I am likely to have the worst conditions between now and 1am as the barometer starts to rise again, so I have tucked myself in for the night.

I am hoping that the worst is over by the morning and I can once again start sailing toward the position of dismasting.  I am now only 200 nm from that position and will hopefully reach it the day after tomorrow.  Until then I am a little sleep deprived so I will go and find my bed now.