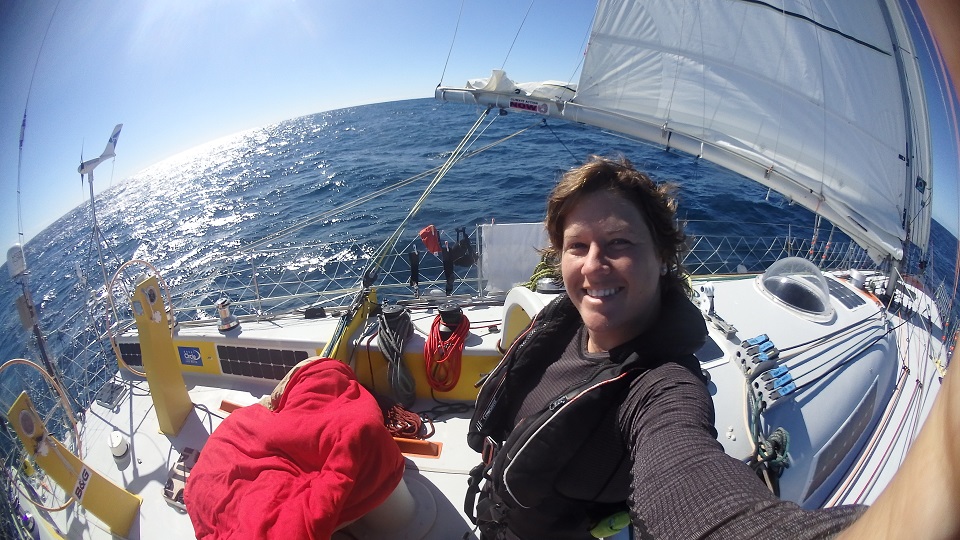 February 20 – four weeks into the around Antarctica challenge.

Once again I haven’t managed to break this cycle of going to sleep late and waking late…  I keep aiming to get to bed earlier like around 10pm local time but every time it is not until midnight or quite often well past midnight that I first fall to sleep.  Last night was no different. I found myself tossing and turning trying to get to sleep. It wasn’t until well past 2am that I managed a few hours.

The weather has been… , not warm, but certainly not cold.  With my vest on and socks still on my feet inside my Antarctica grade sleeping bag I was way too hot. I woke up at 4.30am this morning and kicked open my sleeping bag and stuck out my feet.

After a restless night, I finally found sleep as first light crested the horizon.  The weather had other ideas and at 5am I was rudely awoken.  I had no chance to react. I heard the gurgle of water and seconds later I was lying in bed completely soaked from a wave……  Not Happy.

My bunk is on the low side so when a wave washed over the back of the boat it continued right into the cabin and jumped into bed with me…..  I quickly grabbed some towels but it was a fair amount of water, a few buckets full.  My sleeping bag is waterproof on the outside so normally this water would have just dripped off, however, because I was hot I had opened the bag to air out.  Instead of dripping away the waterproof material created a little swimming pool inside my sleeping bag…. Ahhh.

Talk about frustrating and after such little sleep.  The conditions outside were still very calm it was just a random wave at just the right time.  I mopped up as best as I could with some towels and grabbed another to lay on. My biggest frustration was that my Zhik hydro-base baselayer was soaked from the hip down…

Having showered the day before, I was dressed in clean clothes with clean underwear. Now I am in salty cloths and salty underwear.  If they start to irritate me I will need to change them and clean the salt off my body however with this next storm coming down I figure I will likely be quite salty in a few days despite my best efforts…I crawled into my moist sleeping bag, zipped it right up in case of another wave and tried, not very successfully, to get some more sleep.

When I did get up there was a definite change in the air.  For starters, the sun wasn’t shining and the sky was filled with grey clouds.  The winds have been bouncing around from 20 knots to 10 knots and jumping from SSW to WSW and back again.  By this afternoon, the winds had settled to a SW heading and I gybed the boat to the North.  My new course is 020 until mid tomorrow morning when I should be at 46 South.  There is some large swell associated with the next low pressure system so I am climbing north for a day to scout around the edges, hopefully.

I also took some time today to inspect the boat and complete some maintenance as it is the last real calm weather that I am likely to have for a while. Turned out that the generator not charging was from a blown fuse.  I have replaced that now and have all systems up and running again which is a relief.  I also didn’t find anything amiss in my inspections of the ropes and rigging, steering systems and charging.

I am quite happy with how the boat is going and feel prepared for the next storm that is due in two days’ time.