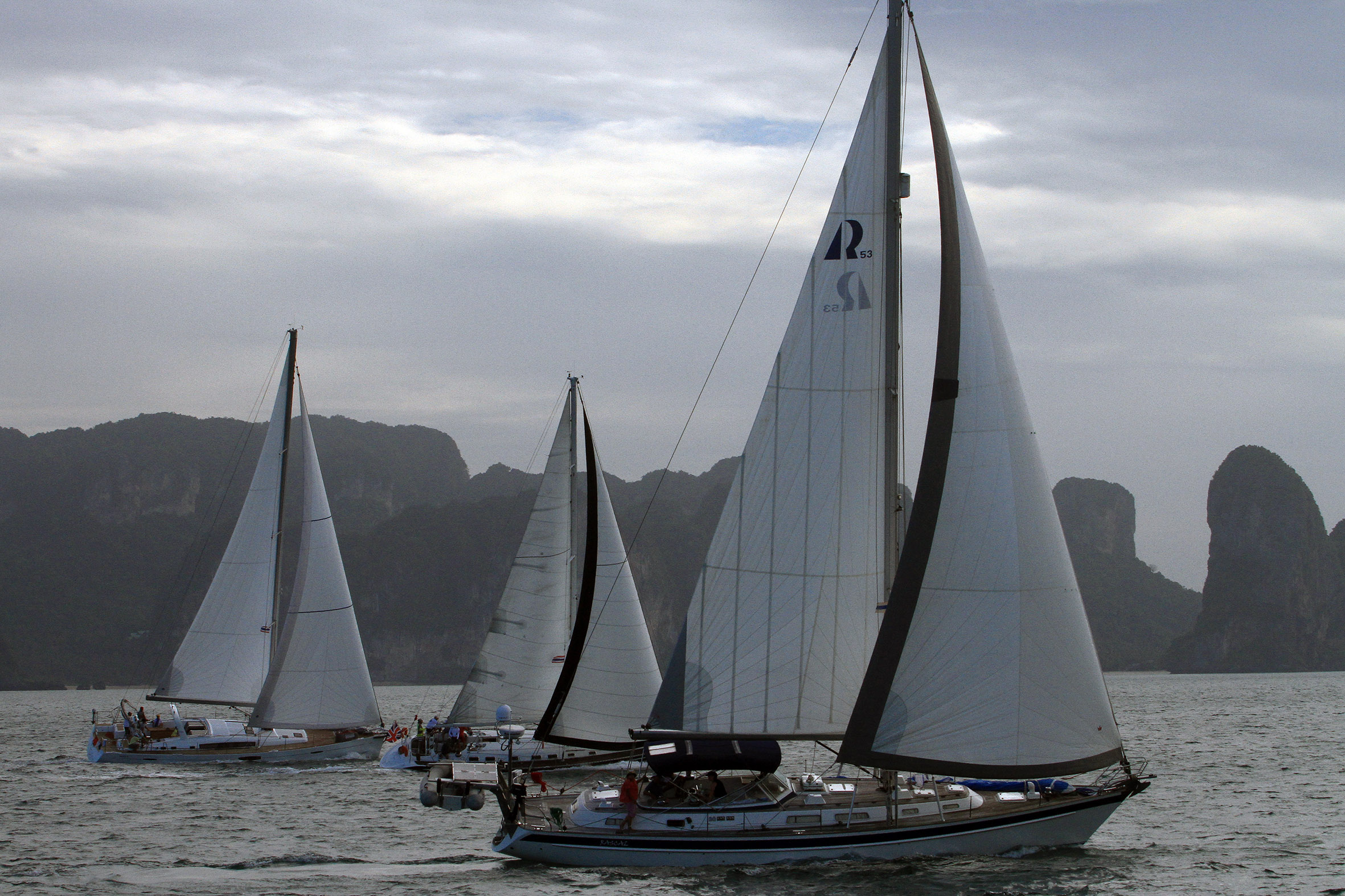 Leaving Krabi on Day 4 of The Bay Regatta 2017. Photo by Scott Murray.

PHUKET, Thailand – The fourth and final day of The Bay Regatta, the Chang Beer Race Day, saw all the fleet sail a short loop around islands off Krabi’s Railay Beach before heading out for a straight shot back to the southern end of Koh Yao Yai with the racing boats doing a slightly longer course than the cruisers. After crossing the finish, all boats headed back to Phuket where they celebrated the final prize-giving and dinner at Kan Eang 2 Restaurant overlooking Chalong Bay.

Already decided before the last day, Aleksandr Trofimenko’s Megazip decided to enjoy the scenery a little too much on the final day and opened the door for Gary Baguley’s Fujin to take their first win of the series – a consolation prize which left them in second overall behind the victorious Russian crew.

With wins on days three and four Hellmut Schutte’s Aquavit 6 took top spot in Cruising A finishing with seven points overall. They were followed by Gary Smith’s Baby Tonga (10 pts), but it might have been a different story if Baby Tonga hadn’t accidentally sailed the wrong course on day three. “Ifs” however don't calculate, and Aquavit 6 claimed the top prize with Gavin Wellman’s Rascal placed third overall.

In the final race for Cruising B, the Gillow-skippered Poco broke Canadian Jim “Yee Haw” Ellis’s stranglehold on first-place finishes, but it wasn’t enough to wrestle the overall title from Remington, who finished on seven points, with Poco on 10. Jim was able to add another notch to his The Bay Regatta belt as no one has won has won a class at The Bay Regatta as many times as Jim has. Piccolo (12 points), Aqua (14 points) and Thalassa (17 points) rounded out the class.

A clean sweep for Kinnon skippered by Stanislav Pechenkin, saw them the runaway Bareboat Class winners with Alan Bower’s All Sail Asia in second and Russel Waddy’s All Sail Venus Hunter in third.

In Racing Multihull Class, Fergus Wilmer’s team on Thor (Fergus and Jenny Wilmer, plus Warwick Downes and James Haste) claimed line honours each day flying around the course at a blistering pace, and again on the final day they claimed line honours in a time of 02:55:08. Thor and John Newnham’s Twin Sharks team of Alfie Rowson, Jason Corall, Tam Keawwantha, and Mark Pescott, ended up tied with seven points each but Twin Sharks won the class on the virtue of its three first-place finishes, which included their final race win by just 38 seconds on corrected time—it doesn’t get much closer than that. In this eleven-boat class, Alan Cawardine’s Asia Catamarans Hurricane finished third overall followed closely by Mick Coleman’s sister ship Java, in fourth.

Multihull Cruising saw Rick Fielding’s Mojo and Sergei Dikanov’s Fenix flip flop first-and-second place finishes throughout the regatta both finishing with six points, but Mojo took the win, based on the results of the last race. Colin Wright’s Swift and Graham Tucky’s Optoloi II came next each with eighteen points, but Swift took third based on the its final-race performance, The Chinese Sanya Yomovo sailing team on DaVinci, had a DNS on the third day and a OCS on the fourth day (they didn’t have a radio on board) relegating them to fifth overall with twenty points.

Simon James, who has stepped in many times to save this regatta over the years, did a tremendous job as PRO setting the courses, manning the starts and keeping things in order while his team on the water—Susan, Susie, Cathy, Chandran and Ron—as always, made sure all the starts and finishes were correctly posted and recorded. Kae Wattana and her Regattas Asia team made everyone happy on shore, providing plenty of good food and drink, and good entertainment. Sean Getchell’s Epic Charters stepped up and provided a superb committee boat, Hakuna Matata, and Tristan Hinxman did great work steering the photographer’s rib, graciously provided by Raymarine’s Mick Kealy.

For the full results, visit www.bayregatta.com.