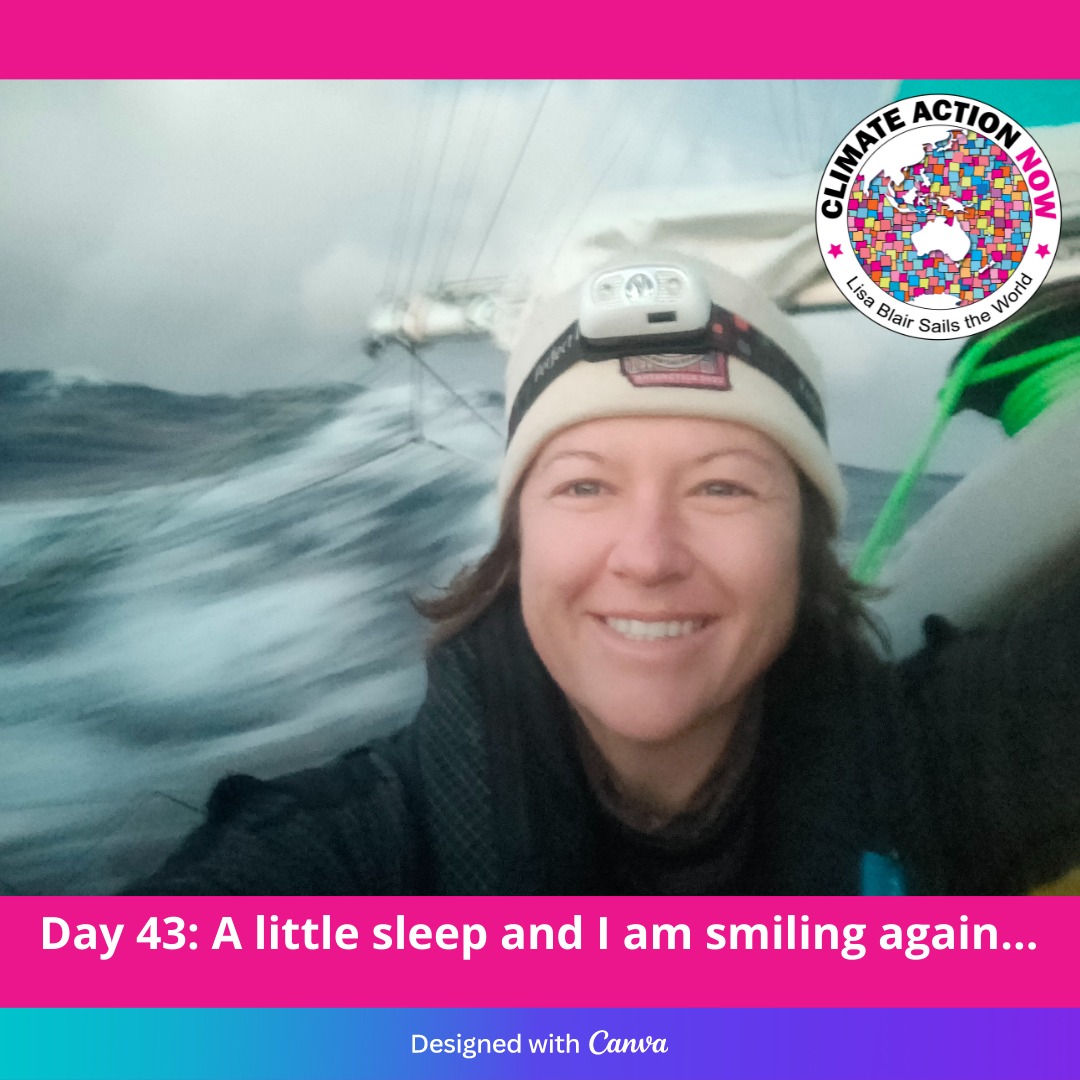 Lisa Blair has been attempting to catch up on some much needed sleep. Pic - LB

In her latest blog post, Blair finally manages to get some rest ahead of Cape Horn, and is taken aback when she finds the steering wheel lying on the deck.

Well after yesterday’s no sleep day I tried to make today a sleep and only sleep day. I think I was successful in getting a good night’s rest, but not quite enough to have caught up on sleep.

I went to bed at 6am or there about yesterday and while I did set my alarms to wake me multiple times, I managed to stay in bed and sleep from 6 to 11, 12-5 and then 6-10 so I really did manage to get some rest.  When I did get up, I woke up feeling groggy and not quite with it. But after a little while I was able to fully wake up and felt so much better.

The winds had mostly been holding between 30 and 40 knots for the last week, so I haven’t had to do any sail changes or even a gybe for days.  I am expecting that the high pressure system just behind me would catch up a bit and I would end up in easing conditions, which is exactly what happened at 2am.

I had just finished changing over the second micro plastic sample and the winds started clocking at 20 knots and we started to go slow. I knew it might only be temporary, so I waited and waited and waited some more before finally preparing to go on deck.

I was initially only going to shake out from reef three to reef two but as I watched the winds, they were more light than windy. I downloaded a weather forecast and all indications show easing conditions as I sail towards Cape Horn.

I opted instead, to shake all the way to the first reef in the mainsail.  When the conditions are light, I could easily go for full sail, but if I do that and then get another 30-knot gust, I will just need to put a reef right back in. I was trying to find a little balance.

When I climbed out on deck, I was slapped in the face with a freezing wave almost right away. Its currently four degrees on deck and I knew it was going to be cold, so for once, I used common sense and actually put some gloves on. I didn’t want to stay out for long though, so I set about immediately getting ready with the ropes to shake out the reef.

It was still dark, so I was just using the light of my head torch to see by, so I was surprised when I looked back, and the light flashed on this unusual black shape on the deck.  Within a second it clicked that I was looking at the helm or wheel of the boat just lying on the deck. Bugger. (Note from Mum – That doesn’t sound good. Sounds more like @#$%&! @#$%&! @#$%&!).

The nut that locks the wheel to the helm pedestal was gone along with the key that secures it. Thankfully, instead of washing overboard in a knockdown, the wheel had fallen to the deck where it remained.  I was able to climb to the back of the boat and lash it to the railing before I lost it.  I looked around the decks for the nut and key but couldn’t find them.

I will need to improvise a repair when I have a minute.  The sea state is due to calm quite considerably once I have rounded Cape Horn so I will be able to put that to good use and fix everything on the boat before tackling the final two oceans.

After lashing the wheel to the railings I shook out the mainsail to the first reef and then half unfurled the No 2 jib to give us some power, but the winds are not playing nice.  The minute I finished, I was hit with 30 knots of wind, and we started rounding up.  I knew that would happen in those winds, so I decided to just wait it out.

But then, the winds shifted from the SW to almost directly S and we were now beating up wind. This was making the 30 knots of wind 35 knots with the apparent.  I also knew that the winds would only be high for a little while and shortly after they ease again, but it is likely to be a day where no sail selection suits as I will either have too much sail or not enough in the lulls.  I will try to find the best middle ground.

The forecast is looking very good for a Cape Horn rounding over the next two days and so I should be crossing onto the Continental shelf tomorrow night with a Cape Horn rounding the next day. The seas are due to ease down to four metres and the winds will hold at 20-30 knots. It’s not 60 knots, like last time.

When I sailed solo around Cape Horn in 2017, I had the mother of storms on top of me and we were in 60 knots of wind and 10 metre seas.  I needed to deploy the drogue (a sea anchor) just to keep control of Climate Action Now and make it through, so I am looking forward to a calmer rounding.

The challenge this time will be traffic.  It was so rough last time that there were no boats in sight, but with better conditions there will likely be lots of craft that operate between South America and Antarctica.

And so on that note I am going to try for a little sleep again but before I go I would like to take a moment to thank the following degree sponsors for their support.

074 West – Thank you so much to Leila Hansen for your generous support of my project.  It is so appreciated.