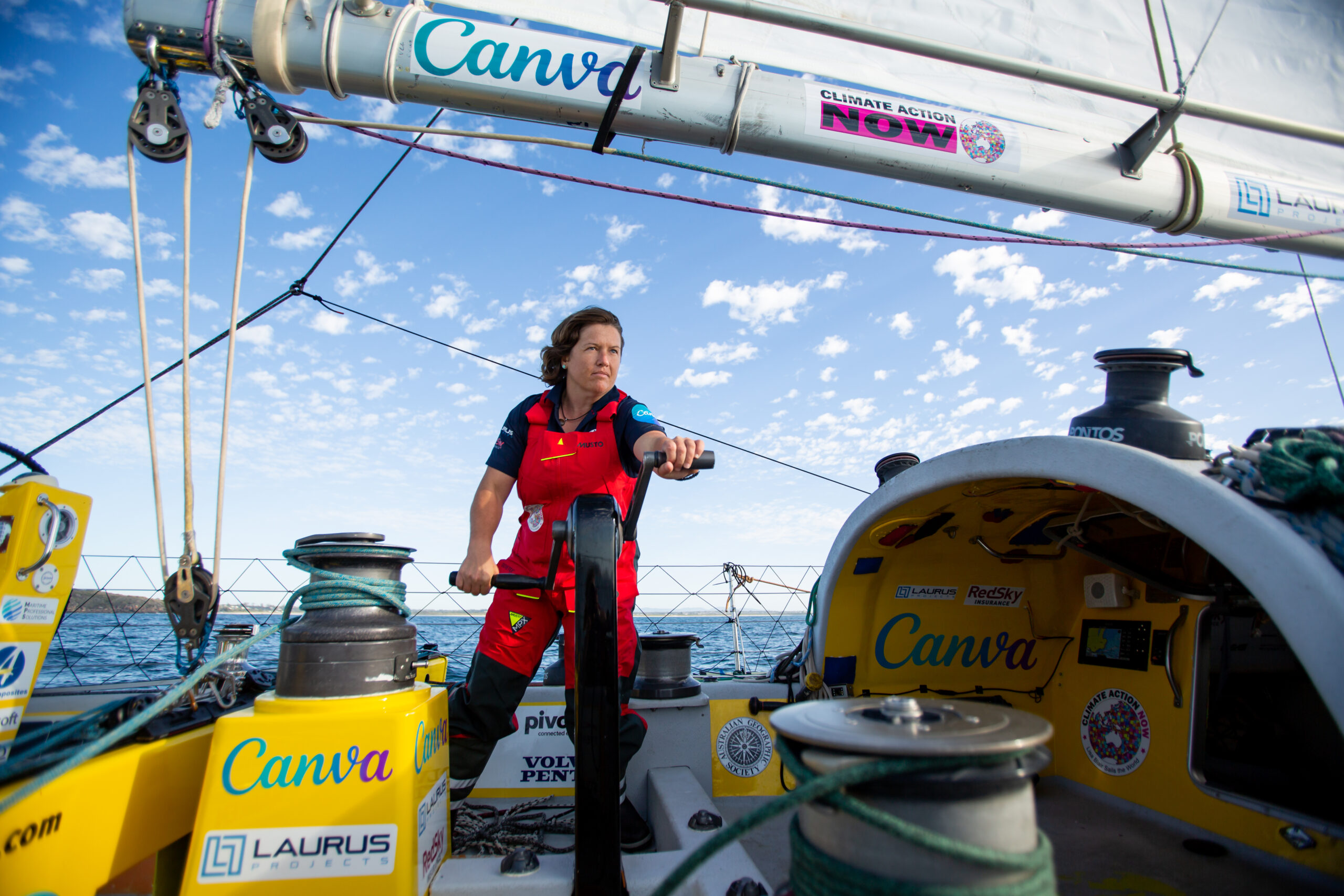 In her latest blog post, the stars put on a show for Blair. And she braves the cold and windy weather, by venturing to the bow of the boat to retrieve the boom preventer line (which she noticed was undone).

Well last night after I finished the blog, I went on deck to go and shake out the reefs and pull out the No 2 jib like I had said I was going to do. The winds were still between 15 and 20 knots, so I was feeling comfortable with hoisting all the way to the full mainsail. It was 4am by the time I started and 5am by the time I finished and had a moment on deck.

I normally use my head torch to illuminate the decks while I am working on the sails, so it tends to block out the night sky, however just as I was finishing packing up the ropes on the cockpit floor, I caught the twinkle of some stars. Once I was finished, I turned off my head torch and stood on the deck in the dark letting my eyes adjust. It has been weeks since I have managed to see any stars as there has always been too much cloud cover, but last night, the longer I stood there the more I could see.

There is nothing quite like watching the stars from the middle of the ocean, you are as far away from light pollution as you can get, and the sky becomes a blanket of stars. There were still come clouds around blocking half the sky off but the sections that I could see were breath-taking.

I stayed watching the stars for almost an hour, so when I finally crawled into bed it was close to 0600. The wind gods also wanted to play silly games. So, while I was blissfully trying to get a short two hours of sleep in before I needed to change the microplastic sample over, they were sending me an extreme variety of conditions.

The winds started blowing in from the SSW at an average of 25 knots, then I would end up under a dark fluffy cloud and we would suddenly be getting 30 knots of wind before the skies would clear and I would be struggling to make the boat move at any decent pace in 20 knots of wind.

I was in bed now and the absolute last thing I wanted to do was go back on deck and put those reefs back in the mainsail so I rationalised to myself that it was only hitting 30 knots for a short time before falling back to 25 knots so putting those reefs in would only mean that I would be going slow in the longer periods that are the lulls in between. I was so good at convincing myself and to be fair the squalls were few and far between, that I was able to keep napping before getting up to change the micro plastic samples over.

Unfortunately, every time we got one of those squalls, poor Climate Action Now was overpowered by the wind. We would round up into the wind causing all the sails the flap and the alarms to trip.  Meanwhile I was trying to sleep and getting almost none of it.

By the time the 10am micro plastic sample change time came around I finally decided to put at least one reef back in the mainsail to help get a better balance, because as the morning wore on the squalls (mini storm) were getting more frequent. Back on deck, it was now a tossup between going for the first reef only or putting in the second reef. In the end I made the decision to put the first reef in but just as I was finishing this off, I changed my mind and put the second reef in.

The winds were holding more at 30 knots than anything else now so we were really rounding up into the winds every few minutes making for some tough conditions, and more than the first reef along would take. After dropping the mainsail all the way down to the second reef I was kicking myself that I should have done this hours ago, but again it was really warm in my bed and about three degrees on deck. I also made the decision to keep the No 2 jib out to get a little more power out of the boat.

Back inside and feeling the chill, I decided to make some porridge before climbing back into bed. It was noon before I made it to my bunk where I was finally able to get another two hours of sleep in.  The whole time the winds were up at around 30 knots and with the jib out we were still getting overpowered and rounded up regularly, making that sleep just as difficult. The winds were also edging past 30 knots in the squalls, so I started to worry about the strength of the No 2 jib.

I really didn’t want to break anything this late in the game. I finally got up and went back on deck to furl the jib away at 5.30 pm. I had noticed earlier that the preventer line, for some reason, had seemed to have come undone. To fix I would need to go to the bow of the boat and retrieve the line before connecting it back up with the section that comes off the boom. I ended up getting fully kitted up with my MPX Musto foul weather gear.

While the winds are up, we are often surfing waves at 15 knots. This tends to kick up quite a spray, so the bow is definitely a wet zone on the boat. I also furled away the no 2 jib first as I was looking to reduce the sail area a little more to balance against the 33 knots of wind we were now getting.

It was dark out and all this wind had kicked up a bit of a messy four-five metre swell, so I made sure to take my time clipping on and moving forward to retrieve the preventer line. Getting to the bow isn’t too much of an issue as I can travel down the high side of the boat, but I need to run the prevent line outside of everything along the low side of the decks. That meant that I needed to return down the low side. This is considered the danger side as it is the side where everything is fully loaded.

If anything was to break, like a mast, it would fall to the low side of the boat. Also, as Climate Action Now pitches and rolls in the swell the low side of the decks is often submerged underwater, so it can be risky going along the decks on that side. I am totally expecting to get quite wet. It was a bit of a process with the rope getting tangled a few times but by taking the timings of the squalls and picking a lull I was able to go to the bow and return with the preventer line without too much hassle.

I then dug out my boat hook and was able to catch the boom end of the preventer line and re-connect the two together again. I couldn’t see any reason why it had come undone so I chalked it up to the shackle getting knocked in a way that would cause it to come undone.

While the winds had been mostly 30 knots while I was on the bow, the minute that I returned to the safety of the cockpit the winds decided to drop right out to 15 knots. Now I was sailing with two reefs in the mainsail and the storm jib up and going nowhere fast.  I decided to give it a minute, and after noticing that this was another rare clear sky night, I turned my head torch off and immersed myself in the billions of stars arching above me.

About 10 minutes later and the winds had built back up to 25 knots, but without the jib we didn’t have a whole lot of speed.  I ended up unfurling the no 2 jib 3/4 of the way out.  It seems to have worked, with a bit of a better balance between the sail plan and the wind, Climate Action Now was once again humming along.

I returned below and made a hot dinner of freeze-dried tofu scramble (sounds amazing right?) well with some cheese added it makes for a hot and hardy meal that does well to re-energies me. And now with a food baby in my belly I am starting to fade. I will take my leave and go to bed, but before I go, I would like to do a shout out to the most amazing degree sponsor. This is another late degree signup but with a request of a specific location where I had already sailed past.

144 East – The Royal Geelong Yacht Club – Thank you so much for your wonderful support, it really means a lot to me and I will be sure to reach out when I know I am going to be in the area so that we can arrange a talk night for your members.

Thanks everyone and goodnight.