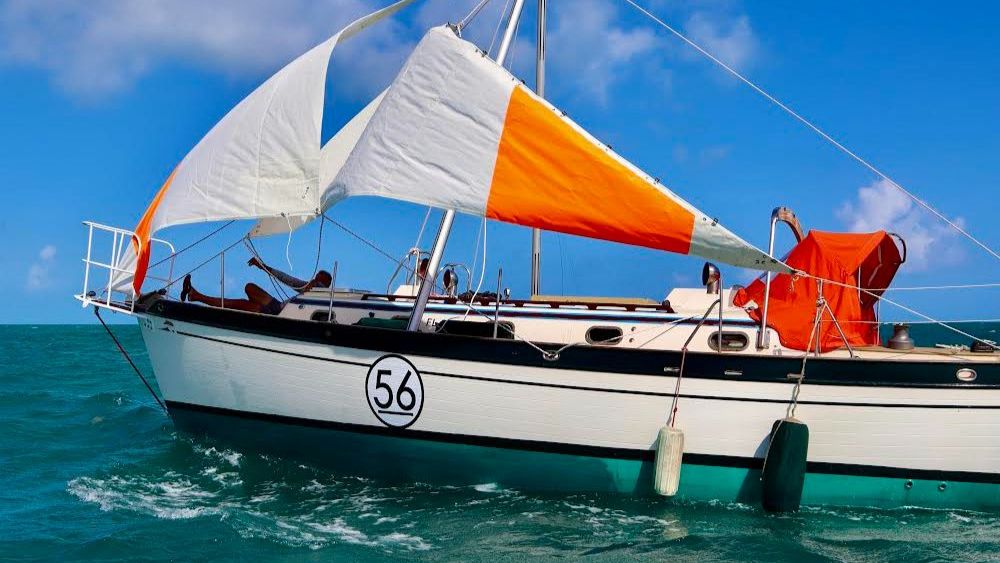 On September 4, Les Sables d’Olonne, the world capital of solo around the world racing, will again host the start of the 2022 Golden Globe Race.

Seven entrants on the other side of the world must still sail to the start, while others continue frantic refits.

Skippers can’t just show up on the start day. They have just three months to arrive in Spain on August 6 for the start of the Prologue. (The Host Port will be announced in the next weeks). This will include compulsory safety briefings and independent surveys of the boats and rigs. The Entrants then complete the SITraN Challenge race to Les Sables d’Olonne for a busy fun time at the GGR Les Sables Race Village opening in Port Olona on August 20, 2022.

The clock is ticking louder by the day. This is especially true for overseas entrants. Two Canadian and two American entrants are just about to launch their boat after extensive refits and prepare to sail to Europe. Two South African entrants are setting sail on the 6600-mile voyage north to the start.

They are all feeling the pressure: there is now little room for failure in their boat preparation and crossings. If your boat is not in the water by now, this means you should be rushing!

“The first challenge of the GGR is getting to the start and the biggest is getting to the finish! We currently have 23 entrants and I hope they all make the start” said GGR organiser Don McIntyre. “Many entrants face time and money pressure, but also the human element of leaving things to the last minute also kicks in about now. Some are wishing they did more in the years before, but quite a few are well organised too. That will make a difference when the gun goes.”

Australian and New Zealanders are the most distant from the start. 2018 GGR Veteran Mark Sinclair (Capt. Coconut) has been at sea solo non-stop from South Australia for 156 days, in his Lello 34. He should landfall in Les Sables d’Olonne around May the 21, finishing his 2018 circumnavigation and ready for the start of his 2022 GGR. He endured four consecutive storms last February when rounding Cape Horn and now has a repaired broken forestay.

Kiwi Graham Dalton was trapped in New Zealand by Covid travel restrictions and has just flown into Les Sables d’Olonne. He has a huge job ahead to complete the refit of Jean Luc Van den Heede’s race winning Rustler 36. Local sailmakers, riggers and engineers are helping, but time is tight. He must then sail the 2000 miles GGR qualifier.

South African entries must cross both the South and North Atlantic Oceans. Jeremy Bagshaw left Cape Town a week ago and Kirsten Neuschäfer will set sail in the next few days for the 6600 miles voyage north.

The Canadians and Americans need around 30-35 days to complete their Atlantic 3000 /3600-mile crossings to Europe if all goes well.

In Canada, Edward Walentynowicz is behind schedule and will launch late May with a planned departure date June 7, going first to the Rustler shipyard in Falmouth for an in-house revision of his ‘Noah’s Jest’. He is pushing to make the prologue on time.

Gaurav Shinde recently completed the paint Party of ‘Good Hope’ in an elegant grey livery and launched late April in Lake Ontario before crossing. He has a long way to go down the St Laurent River before even reaching the Atlantic. With all new equipment and systems, he hopes it all works.

Further south, American Guy deBoer in Florida just launched his ‘Spirit’ on May 2 with the help of his team and completed his jury rig test, but his many boat modifications are yet untried. He told us, “The date may move a day or two, but I expect to set sail on June 1. You should expect me to arrive in LSO by July 5. See everyone very soon!”

His neighbour Elliott Smith, the youngest entrant in the race is facing overwhelming odds giving himself until the end of May to set sail and be in Europe on time for the start. Like many entrants he needs to complete his jury rig and emergency steering trials. He still has to purchase the required GGR safety gear and is short on sails but is fuelled by pure passion.

For European and UK entries, being closer does not necessarily mean being ready. Several entrants are rushing to get their boats finished on time. Eighty-year-old UK Entrant David Scott Cowper was hit by Covid and a shortage of available labour to help his refit. He remains confident of completing it and his 2000-mile solo qualifier just in time.

Finnish entry and 2018 GGR veteran Tapio Lehtinen is heading a double refit in Finland of both his 2022 GGR entry ‘Asteria’, a Gia 36 and his 2023 Ocean Globe Race entry ‘Galiana’ a Swan 55, at the same time. He will bring both yachts to Les Sables d’Olonne for the start.

Spanish entry Aleix Selles is completing his refit in the Adriatic and will have to multitask, working on the boat while completing his 4000 solo qualifying mileage for the race. He admits he is behind schedule but insists he will be at the start.

With nearly half of the GGR fleet at sea over the next couple of months, the lead into the next edition of the GGR already promises a few adventures even before the start! The time for talking and refitting is just about over.

For more information on the race, see: https://goldengloberace.com/