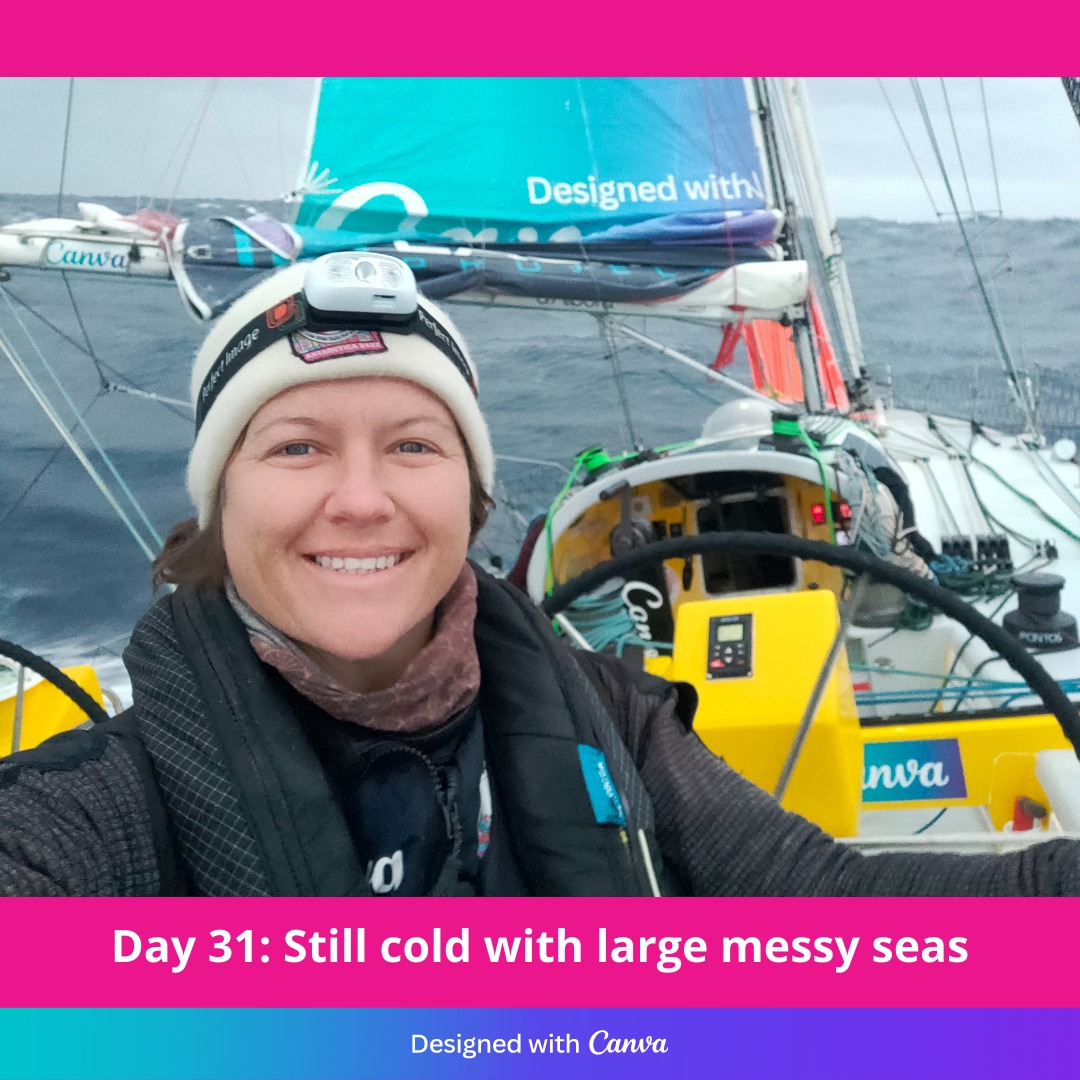 In her latest blog post, Blair looks to increase lead over record holder Fyodor Konyukhov as she attempts to keep warm.

Well we have been rocking and rolling all morning in this swell with several knock downs.  I was sitting in the galley watching it all on the CCTV cameras and it makes for some remarkable footage, I just need a minute to edit some together and I will post something to share soon.

When I am watching I could see the sunrise at 5.30 am off the bow of Climate Action Now and we would look almost peaceful as we sailed along in a patchy blue/grey sky, and then I could see a wave coming and it would pop us on the side so hard that poor Climate Action Now was now would lurch to the port side and the decks would become awash and we would be half under water. No real damage is done when this happens if I have the boat set up correctly, so it more than anything, it just looks dramatic.  She will then almost shake herself free of the water before caring on and sailing into the sunrise….

So while I didn’t want to be on deck watching it all and getting soaked in these conditions I did enjoy hanging out in the galley and watching it from there on the camera.  I was surprised at how many times we were getting knocked down, but it was a six-metre swell.  On the plus side, the swell was mostly unbroken so there wasn’t too much power behind those knockdowns.

When the wind is strong enough to break the waves, it causes the waves to curl over and have lots of white water which is when it can start to get dangerous. The broken section of the wave with the frothing white water is the dangerous bit.

There is a rule of thumb that one square metre of white water is equivalent to one ton of pressure being applied so if you have a six metre wave and the top three meters is frothing white water then you are getting hit with three tons of pressure….. and that is risky. I am not in those conditions so we shake it off and continue.

The W to SW winds had started to ease in the morning and we mostly sitting at 25 knots but there were lots of lulls at 18 knots or less and also lots of squalls at 30 knots so it made it nearly impossible to choose a sail plan, I spent a good few hours watching and monitoring but it wasn’t until late tonight that I finally went on deck and shook out a reef.  We are now sailing on the second reef and the storm jib and making good progress, while it’s not the surfing conditions of a storm, we are still able to maintain above seven knots, so I am happy enough.

Fedor seems to be breathing down my neck and is roughly about 100 nm behind me so my goal in the next 10 days is to try to increase my lead from him dramatically.  I am really trying to get a little safety margin before rounding Cape Horn because I know that the South Atlantic and the South Indian are going to throw a lot more storms my way. The South Pacific stretch of this record is the easy bit. See Live Tracker

I have also started to wear my Musto Mid-layers, adding them to my daily wardrobe.  They are a combination of salopettes, (overalls and jacket). They have the softest micro fleece on the inside and a waterproof spray layer on the outside. They have become a primary piece of clothing because not only do they keep me warm in these really cold temperatures, but they also can take a splash or two from the waves.

At 8.00pm I set about making some dinner and I was graving Mexican but I didn’t have any more freeze dried meals in this week’s rations, so I ended up making a concoction from tinned beans, cheese, corn and salsa and turning it into quesadillas, which were delicious. Just the type of fuel I needed to keep going.

I am not sure why, but as tired as I was, I couldn’t get to sleep. I just continued to potter about the boat doing different jobs throughout the night so we shall see what time I finally get to bed. At this rate I think I am just so over tired and wired, however I know the importance of getting some sleep. Sleep is going to be a priority of mine for the next few days, until I can catch up a bit.

So in saying that it is time for me to try to get some sleep, but before I go I would like to thank the following degree sponsor.

126 West – d’Albora Marinas Rushcutters Bay, Sydney NSW – Huge thank you to d’Albora Marinas for your ongoing support, this marina is in a perfect location for access to the city if you are a visiting yacht.