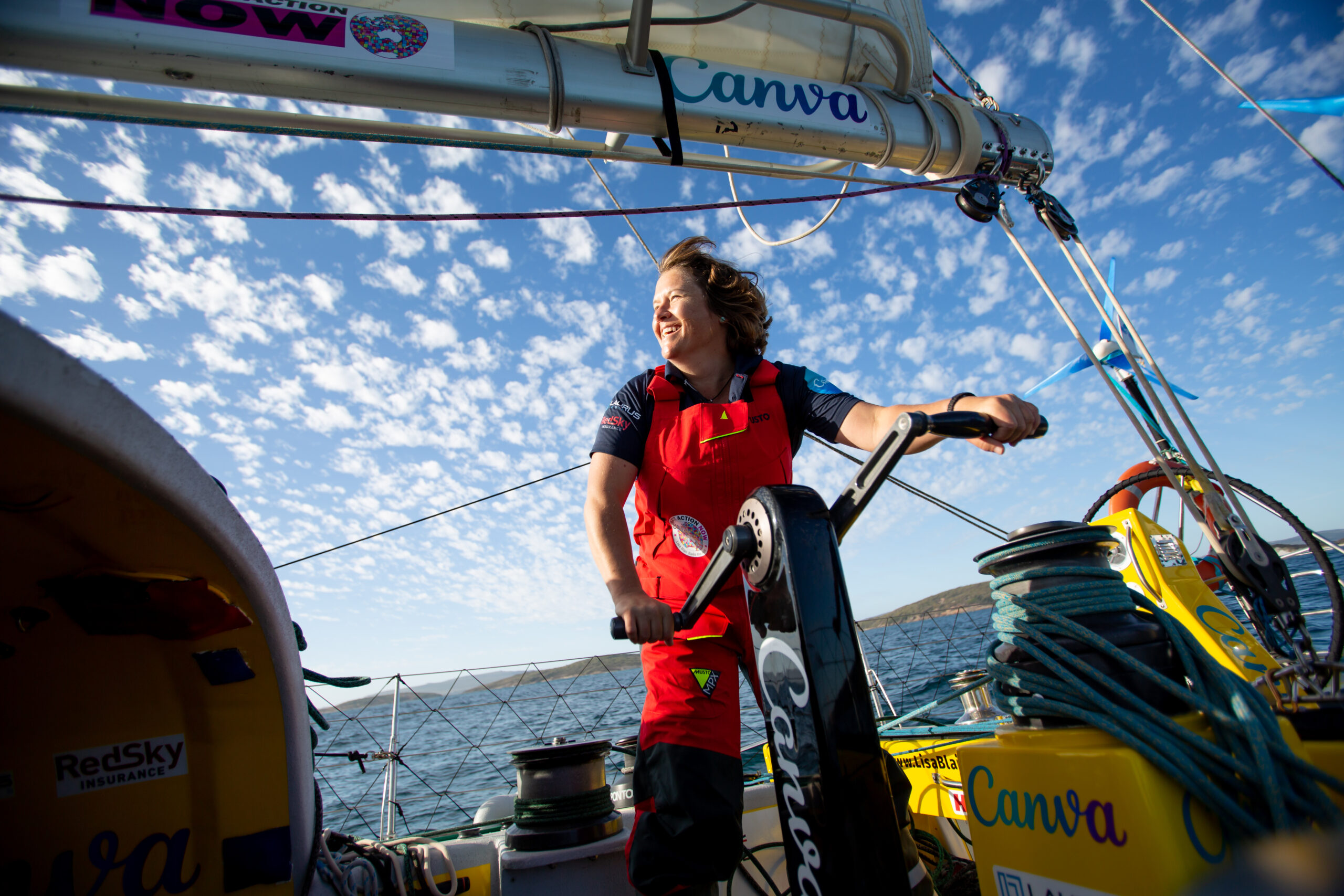 In her latest blog post, Blair details what wet weather gear she wears when the temperature drops to below five degrees Celsius. And Climate Action Now is officially on the home stretch to the finish line, with no more landmarks to pass.

Last night I managed to get to bed at 3am but it was a cold night so I spent quite a bit of time boiling the kettle twice so that I could have a hot water bottle at my feet and one to shove down my vest to keep me warm in bed. It was so nice buried deep in my sleeping bag, and I simply didn’t want to get up to do the micro plastic sample changes at 0800 and again at 1000, but it needed to happen.

The science aspect of this trip is one of the more important factors for me. The record is one thing but to be able to collect scientific data from a region of our planet where we have none, I think makes this trip worth every early morning sample change.

By 1000, just as I was going back to bed, the winds built up to 30 knots and held there for some time. As I watched from my bed, they then built to 35 knots. I knew it was time to get up and put the second reef in the mainsail. This was a sail change I wasn’t looking forward to.

As I now have a SW wind it is bringing with it the colder temperatures off Antarctica, so the air temperature has dropped from 10 degrees the other day to a blistering three degrees again, making my hands burn in the wind. Surprisingly, given that I am still sailing above the Antarctic Convergence line the sea temperature has remained at 20 degrees. This is a huge difference from last week’s five degrees, but still, that wind is brutal and so cold. Making sure I have the right layers on is really important in this climate.

So to give you an idea how many layers here is a list of what I wore this morning for the sail change, and it is all the reliable Musto Gear.

Sometimes I get so puffed up with all the layers that moving around gets a little tricky, but it is what’s needed with the extreme cold temperatures.

And so I braved the cold and put the second reef in the mainsail mid-morning. It was a border line decision as to whether I would need the third reef too, but I decided to start with the second reef. If that wasn’t enough, I could then put the third reef in. I was fortunate, as a few minutes later and the 35 knots of wind started to ease back to a comfortable 25 knots, and the sail plan of two reefs in the main sail and the storm jib was a good set up. We spent the rest of the afternoon sailing quite fast and I was finally able to get some sleep.

We have also cleared the French Southern Territories, and now there is nothing between me and Australia. The location where I can turn left and exit the racetrack and sail north back up to Australia is now less than 2000 nm away, a 10-day sail. It is a little wild thinking that this journey is coming to a finish, after so many days of solitude at sea. It will be great to see everyone again and enjoy a few land comforts like hot showers and clean hair.

I ended up lazing in bed reading my book until nearly 11pm before I finally decided to get up and make something to eat. As it seemed that I would likely only have one meal today I decided to make one of my favourites, the bare-naked burrito. I included the last corn chips in the cupboard. It was well worth it. A good meal always sets the tone of the day or night, so the rest of the night has passed well with Climate Action Now cruising along.

The winds have now started to ease, with a high-pressure ridge to pass over us tomorrow. I am expecting that the winds will drop out almost entirely over the course of tomorrow only to veer to the NW before filling in again, so for now I am about to go on deck and shake out those reefs in the mainsail and hoist it all the way up before unfurling the number two jib. It’s still a touch too much wind for my big light air sail but at 20 knots the full main and the number two jib will be a great combination.

After that I aim to try for a little sleep before I need to again change the micro plastic samples over, but before I go I would like to take a moment to thank the following wonderful degree sponsor.

070 East – Richard Ward – Seawind Catamarans – Thank you so much Richard for following and supporting this project. I really appreciate the support of not just this degree but the other two that you have sponsored as well.

Thanks all and goodnight.